Korean semiconductor company SK hynix has announced the launch of the world's first DDR5 DRAM modules. It worked closely with Intel on the next gen DRAM specifications and technology from the outset, though JEDEC standardisation, and this will ensure DDR5 meets its performance goals and is easily adopted by mutual customers. SK hynix says that its DDR5 DRAM is "optimised for Big Data, Artificial Intelligence (AI), and machine learning (ML) as a next generation standard of DRAM". Other important global players have made use of SK hynix labs, system testing and simulation facilities to get ready for the launch of the new high-speed high-density DRAM. 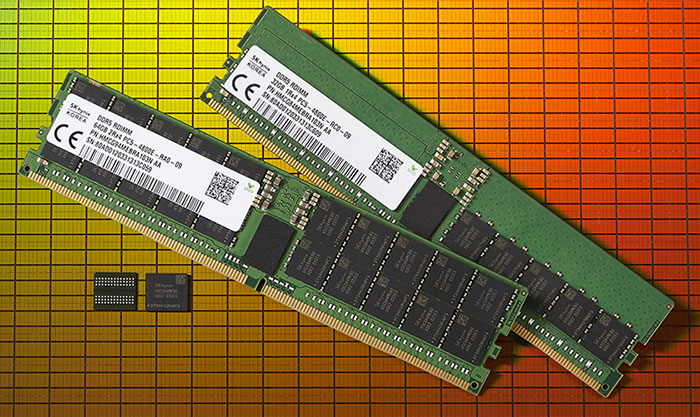 The above launch announcement has been preceded by a number of DDR5 stories outlining SK hynix's plans, and the release of the finalised JEDEC specification back in July, so you might know what to expect. Nevertheless it is worth quoting the actual SK hynix launch product specs:

Illustrating the transfer speeds with a common-or-garden reference point, SK hynix says that its DDR5 DRAM can transfer the equivalent of nine FHD movies (at 5GB each) in one second. Moreover, its power consumption is 20 per cent less than DDR4 DRAM. Remember, the JEDEC published specs pointed to a max standard data rate of 6,400Mbps, (going as high as 8,400Mbps) but predicted somewhat lower launch speeds for the first products.

SK hynix was also pleased to share that it has integrated DDR5 is Error Correcting Code (ECC) inside the memory chips. This can correct 1-bit level errors on its own and increases the reliability of applications "by 20 times," according to the firm.

Currently SK hynix is the world second largest DRAM producer with 30 per cent market share. Samsung is the biggest DRAM maker according to the latest data from TrendForce.

BigBANGerZ
need to know what the timings and latency are, simply being fast DDR5 doesn't say if its better than DDR4 unfortunately it could well be the early modules perform slower in practice but I'm sure it will get there eventually

True this, I get very confused about CAS timings etc, I think it's time for me to have a good read about it, anyone know any really good simple reads on this?

DanceswithUnix
Integrated ECC? makes it sounds like that is going to be standard, but I'm guessing that will be an option usually switched off.

The ECC can only do 1 bit corrections IIRC and it's purely internal. I.e. If errors occur between the “Stick” and the CPU it will not be detected/corrected. The server grade ECC like in current DRAM includes ECC on the CPU Memory controller as well. I can't remember if it can correct more than 1 bit errors but it certainly can detect more than 1 bit errors.