I noticed EVGA tease these new mechanical gaming keyboards recently, ahead of this news, by showing a close-up of one of the newest features present – a time-of-flight sensing system installed on the mid-front edge f the keyboard frame. The TOF sensor is actually only present in the Z20, and is used for determining the user's proximity and thus waking or sleeping the PC system. Who thinks this is a good feature for a gaming keyboard? 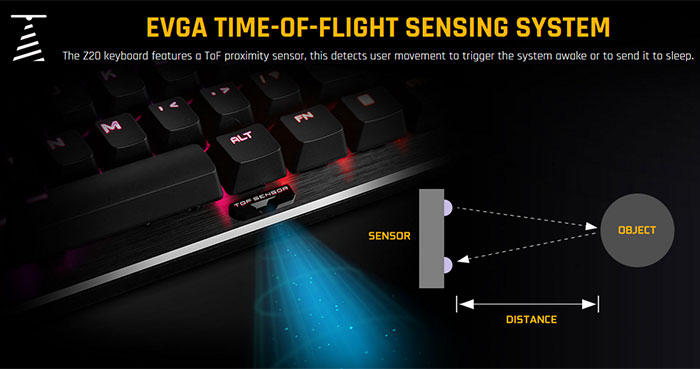 A shared feature of the Z20 and Z15 keyboards is the internal 32-bit Arm Cortex-M33 core microprocessor, designed to support a 4K Hz report rate. EVGA says this implementation is 4x faster than a standard keyboard and will be more responsive, with inputs more precise. Other commonalities are the per key RGB LED lighting, and easy access media controls including the volume roller.

The EVGA Z20 (US$174.99) is further differentiated with its dedicated Macro keys – you can see these down the left hand side and they feature special RGB slice highlights, as do the WASD keys. In close-ups, and if you bought one of these, you will notice these same highlighted keys feature a textured surface, this is what EVGA calls a 4D bump keycap.

The package is rounded off with a sizable leather texture wrist rest. It looks like both new keyboards come with this accessory.

Major differences with the EVGA Z15 (US$129.99)are its choice of traditional mechanical keys from Kailh, the lack of the dedicated macro keys and 4D bump keycaps. Additionally, the Z15 doesn't feature a lightbar surround.

EVGA also launched a trio of new gaming mice. The higher-end pair, the X17 and X15 both feature a 32-bit Arm Cortex-M33 processor which is capable of 8KHz report rate and 0.125ms response time. These are claimed to be the world's first triple sensor mice with dual LOD sensors, paired with a Pixart 3335 optical sensor on the X20 or Pixart 3389 on the X17. You can read more about the mice via the link in the intro and the individual product pages. The new X17 costs US$79.99, and the X20 is US$119.99. Pricing and availability for the X15 is yet to be revealed, but it is said to be 'coming soon'.

The TOF sensor is actually only present in the Z20, and is used for determining the user's proximity and thus waking or sleeping the PC system. Who thinks this is a good feature for a gaming keyboard?

I've been waiting for these interdimensional keycaps. ;)

They would have to change shape as they were actuated so they adjusted their morphology over the temporal domain. We have really hilarious buttons on ultrasound machines - 2D and 4D.

“4D bump keycap” - it's just a textured 3D finish and only on the WASD keys by the looks of it (not everybody uses the default mapped movement keys).
“Time-of-flight sensor” - I don't see the point of this feature either, consider the Z20 keyboard that it's used on is a wired keyboard (2m braided USB cable).
“Who thinks this is a good feature for a gaming keyboard?” - Perhaps, on a wireless keyboard for those who wish to save a minuscule amount of electricity at a trade-off of those occasionally moments when the keyboard doesn't detect you fast enough.