Microsoft research has published a video demonstrating a controller accessory which could become a staple for those wanting to immerse themselves in virtual worlds. PIVOT is the name of a new wrist-worn haptic device "that renders virtual objects into the user’s hand on demand". While at first glance wearing a pair of PIVOTs might seem ungainly, as I watched through the video the concept seemed to work well and open up some interesting interactive possibilities to make VR more real feeling.

The Haptic PIVOT is described by Microsoft Research on this official web page. However you can get a firm grasp on the invention and its possibilities by checking out the two and a half minute video above. Through most of the video you will see bimanual interaction with haptic feedback.

Microsoft's demo starts very modestly with someone using the controller to reach up and pick apples. It looks simple but it is interesting to see the 'haptic handle' pivot forward as you reach up to present the VR voyager with a solid feeling apple. Importantly, the doorknob sized handle keeps out of the way when you are not grasping things in the VR world, which lets you do other dextrous tasks. 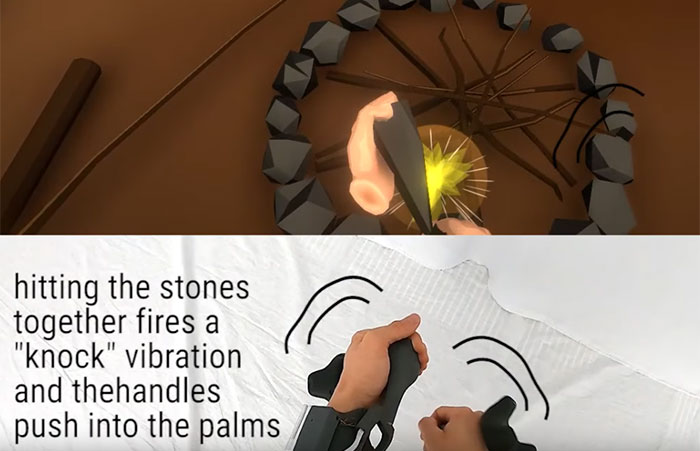 Later in the video we see the user carry the apples basket way and set up a fire by knocking two lumps of flint stones together. Then the user picks up various objects such as an axe and a stick - and again the grasp of the 'haptic handle' must help these experiences feel more real. 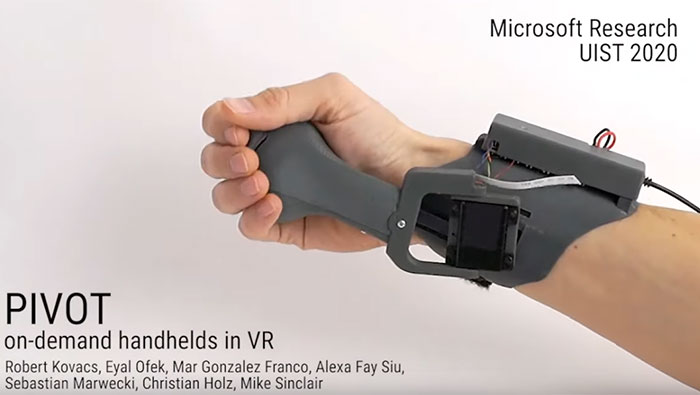 In gaming it is quite common practice to invoke or summon objects using gestures and this is another task at which the Haptic PIVOT VR handle controller is adept. In the video the VR voyager summons a torch and uses it to read a book. You can easily imagine gestures being used to summon objects from the environment or your inventory in game genres like adventures and RPGs.

Posted by Ttaskmaster - Thu 22 Oct 2020 15:04
Sounds interesting, but I am already foreseeing far too many limitations to make this in any way more immersive than the existing buzzing hand controllers.
A step forward perhaps, but only a little one… and then barely more than a shuffle.
Posted by Zuh - Fri 23 Oct 2020 02:09
The future would be with the gloves that could “stiffen” at desirable positions. You could “hold” any shape of object without delay.