You are here:
Peripherals Software News

Microsoft introduced the dedicated Windows key to keyboards many years ago, perhaps inspired by platforms such as the Apple Mac and Commodore Amiga. I was surprised, when I checked, that it wasn't until 1994 that the Windows key first appeared - on the Microsoft Natural Keyboard in that year. It would gain traction the following year with many useful shortcuts natively supported by Windows 95 and NT 4.0.

Now it looks like Microsoft is considering inserting another dedicated key into its keyboard designs - an Office key. Windows specialist leaker Walking Cat shared a key image and a feedback form regarding a dedicated Microsoft Office key a few hours ago. See below. 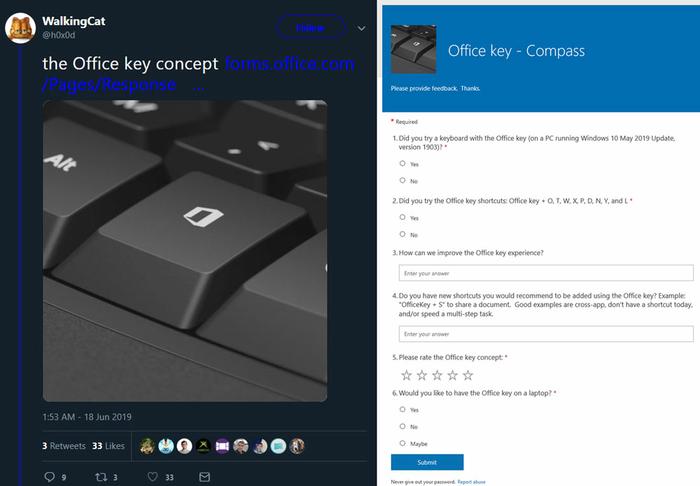 According to The Verge, Microsoft's plan would be to replace the Windows key to the right of the spacebar in some layouts. In the official sample image, above, you can see it is next to the right Alt key, below the comma and full stop keys. On the keyboard I am using now (the Drevo BladeMaster TE) that key doesn't even exist, due to the Fn key.

So, what would an Office key do? No tester has stepped forward with such details at the time of writing. In the response form, Microsoft mentions that the Office key can be used in combination with O, T, W, X, P, D, N, Y, and L. However, no reference table is supplied to chart what these shortcuts might do.

Later in the form Microsoft asks testers for any suggested shortcuts they would like to see implemented. 'OfficeKey + S' is given as an example for sharing the current document.

MS Office is indeed one of the most popular applications available on PCs. It already supports extensive keyboard shortcuts which pop-up when the Alt key is pressed. Do HEXUS readers see any merit in this keyboard tweak in testing?

Posted by Tabbykatze - Tue 18 Jun 2019 11:40
I don't think my hands ever really touch that area of the keyboard, sometimes i forget there is actually a right ctrl/alt!
Posted by huggi - Tue 18 Jun 2019 11:58
I don't really see a point for it. Maybe business-focused keyboards can utilise it but even that's stretching it IMO.
Posted by blokeinkent - Tue 18 Jun 2019 12:08
I'm quite a heavy Office user across the whole suite but I can't see the point in a dedicated key. I also use a compact keyboard and have a Function key on the right side as well.

Pretty much eveything you'd want to do can be achieved in context popups, or in either shift or alt combo's, or function key combo's.

That's been good enough for years so why invent something that's not needed?
Posted by winactive - Tue 18 Jun 2019 12:18
You could put copy and paste on the Office key and it would be new to some people…

Office & S would be Send/Share, makes sense or Office & E might be email.

They need to poll some really bang average bods and ask them what comes to mind with each letter.

Or not bother with the keys as most people want touch or voice.
Posted by mark_a_scott - Tue 18 Jun 2019 12:48
Hazarding a guess, the combination would open applications: