There’s an interesting new mechanical keyboard about to enter the fray by a maker called Drevo. Launched on Kickstarter only yesterday with a funding goal of US$20,000 the project has already easily surpassed that with over $25,000 in its back pocket. In brief, the new mechanical keyboard, aimed at gamers, includes features such as a programmable knob, choice of RGB Cherry or Gateron switches, Wired or wireless operation, on-board memory and more. 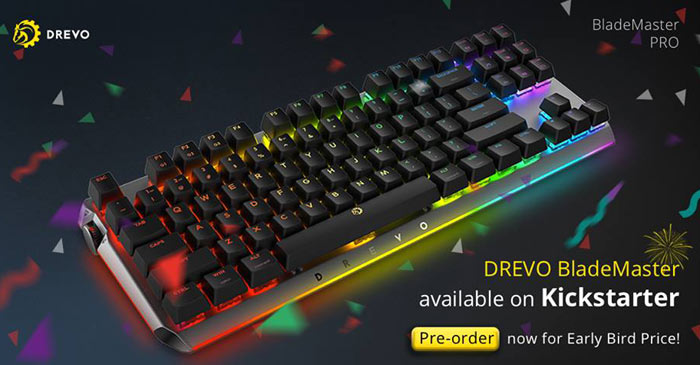 This version of Drevo’s new gaming keyboard features a “superior typing experience” thanks to the use of Cherry MX RGB switches with a choice of feel-type between red, brown, black and silver. It can connect to your systems via Bluetooth 4, 2.4GHz (1ms/1000Hz) Wireless or USB. Three devices can be connected at one time. A 4,000mAh battery is equipped and the USB cable is detachabale. This board is still available on an early bird deal for $99.

Drevo have a cheaper version of the Blademaster, the TE edition. This is a captive cablke wired only model and comes with mechanical switches from Gateron with your choice of red, blue, brown or black key-feel types. You can still nab an early bird offer on one of these keyboards for $55.

Both of the above models can be requested with US/UK/IT/DE/FR/SP/JP/KR layouts. 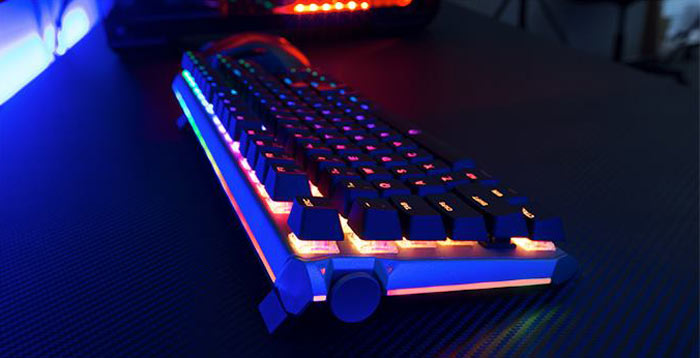 Now we can have a look at what Drevo claims as the USPs for its new Blademaster gaming keyboards. The firms says it has indulged in 14 months of R&D, with vital input from PC gaming forums, in getting the features right. In summary it has the equipped the Blademaster keyboards with the following appealing features:

If you are interested in the Drevo Blademaster keyboards the project still has many weeks to run but the early bird offers could possibly run out. After the Kickstarter project closes, mass production is scheduled for July, with shipping and software delivery expected in August. 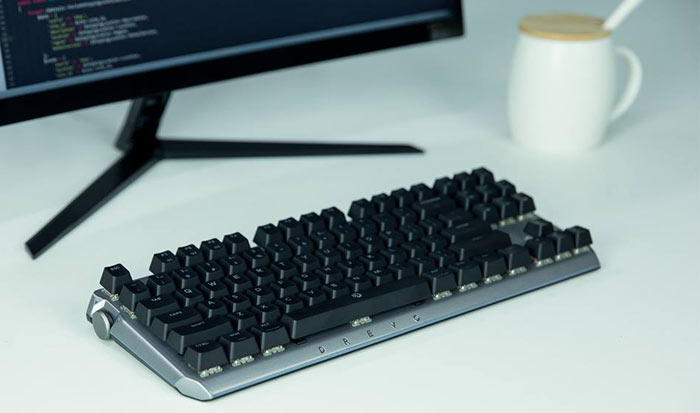 Drevo's product is by no way the first gaming keyboard to equip a knob, dial, roller, or slider type control. Only a month ago we saw Roccat release the Horde Aimo Membranical keyboard with a tactile dial to the upper right, above the numpad. This dial is multifunctional and can be used for fast intuitive control of illumination, brightness, dpi, volume and more. Furthermore, Roccat’s device is compatible with Windows 10 Dial functionality.

HEXUS
It includes a programmable knob.

Really not a fan of this Corsairy keyboard style. Looks like a piece of LEGO™. Would be nice to have other features for that price, like extra macro keys and so on.
Posted by maverick77_uk - Fri 27 Apr 2018 16:30
I agree with Ttaskmaster - looks like a major dust/crumb collector.

I can't help thinking it looks like the CPU from the first Terminator.

IIRC, that's the one thing it's good for… in that it's easy to clean around the keys, as well as easy to pop them off…?
I've a friend with something similar, so I'll ask tonight…

maverick77_uk
I can't help thinking it looks like the CPU from the first Terminator.

I was thinking more like Ziggy's handheld terminal that Al uses in Quantuum Leap, myself…!! :lol:
Posted by Mr_Jon - Fri 27 Apr 2018 17:54
Sure looks fancypants.

Build quality will be superb though, if their other offerings are anything to go by. I got a Drevo Excalibur mechanical keyboard last year, and it's a fine piece of kit. Very impressive for the price.
Posted by PsyaNyde - Sat 28 Apr 2018 04:16

Build quality will be superb though, if their other offerings are anything to go by. I got a Drevo Excalibur mechanical keyboard last year, and it's a fine piece of kit. Very impressive for the price.

I agree, I've had my Drevo Tryfing 88 for a while now and I'm very happy with it.