Philips has quietly published the product page for a new large screen entertainment and gaming monitor called the Momentum 559M1RYV 4K HDR display with AmbiGlow. If the size, nature, or codename of this monitor seems familiar that might be because HEXUS reviewed the Philips Momentum 558M1RY last August. So, what's new just a few months later? 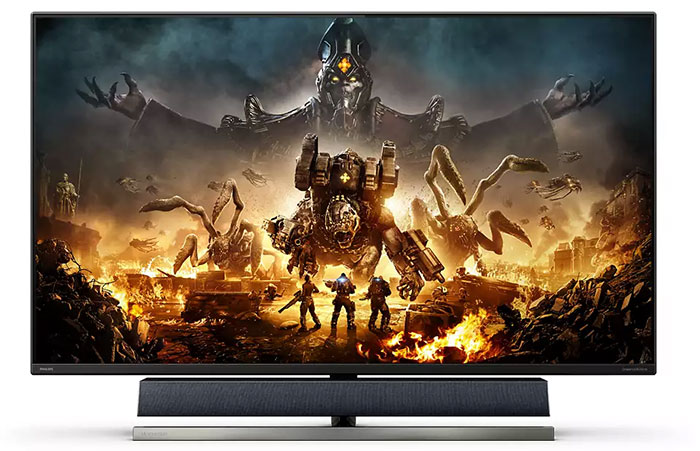 From the outward appearance the new Philips Momentum 559M1RYV looks identical to the Momentum 558M1RY – including that characteristic Bowers & Wilkins soundbar that underlines the screen, and AmbiGlow frills.

In the feature comparison table above I have bolded the key differences between the monitors. These might seem like small changes, but in the HEXUS review of the 558M1RY, Parm lamented that lack of HDMI 2.1 support for next gen consoles, for example. Other new treats widening the 55-inch Momentum's appeal include the maximum refresh rate uplift to 144Hz, and the addition of a USB Type-C port that includes up to 65W power delivery. 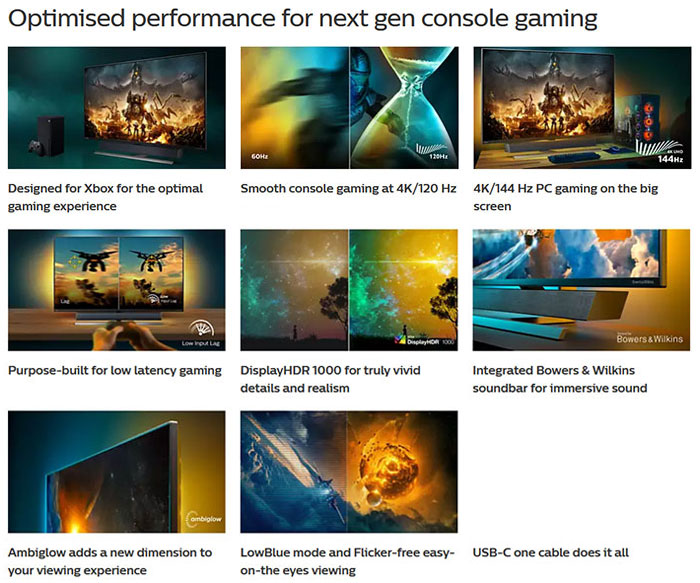 Though I've mentioned the console readiness of the Momentum 559M1RYV, I think it is worth reminding readers that this monitor is also good for PC FreeSync and G-Sync compatible game playing. With the updates the only remaining serious drawback when considering the Momentum 559M1RYV would be the price vs a similar sized 4K OLED TV. We don't actually know the price of this new model (or the release date) but it probably isn't going to be cheaper than the 558M1RY at launch. 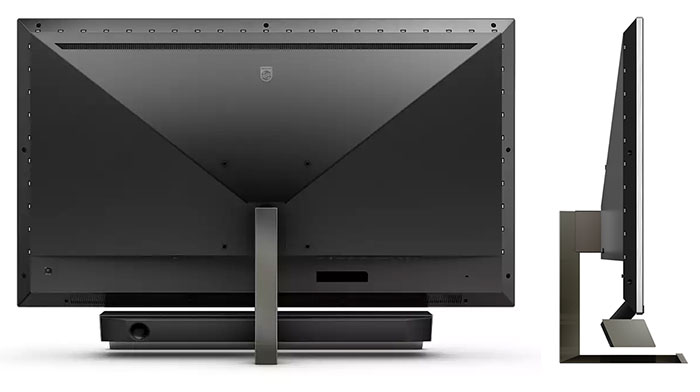 TVs are fantastic for monitors if you're a casual user (browsing and games, no production), I currently use a 43" Sony HDR TV, and while the colour replication and all that jazz ain't as good as a monitor, you don't have a second one next to it showing that. But with this Philips it actually has monitor level reproduction and specs suited to one, so ya I'm excited.

NonLinearLines
No point going for 4k144Hz if you don't have the GPU yet to use it.

It has Freesync, so the 144Hz should mean it can do low framerate compensation. It isn't obvious, but the high framerate capability actually helps with an under performing graphics card vs some fixed 60Hz TV where you have to nail over 60fps or suffer nasty laggyness.
Posted by NonLinearLines - Tue 23 Feb 2021 14:39

DanceswithUnix
It has Freesync, so the 144Hz should mean it can do low framerate compensation. It isn't obvious, but the high framerate capability actually helps with an under performing graphics card vs some fixed 60Hz TV where you have to nail over 60fps or suffer nasty laggyness.

True. Was more thinking no point buying it first and getting frustrated about not being able to use it properly. Should be easier to grab one later, while 3080s are gonna be limited stock for a while.