MMD Philips has launched a pair of new FHD gaming monitors which may appeal to budget conscious buyers. These monitors are said to be Philips' first foray into the PC gaming segment, which is often the home for premium pricing. The Philips 242E1GAJ and 272E1GAJ both utilise FHD VA panels and from the codenames you will have probably guessed that they offer 24-inch and 27-inch diagonals, respectively. Other key features are their headlining 144Hz max refresh rates and 1ms MPRT response times. 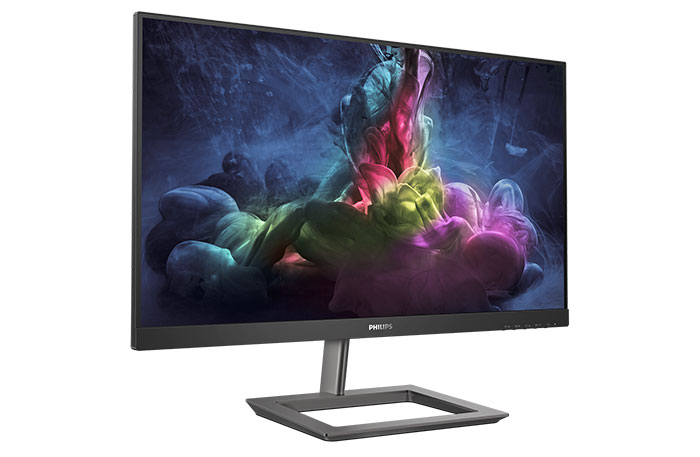 Philips reminds those interested that these 144Hz displays refresh about 2.4x faster than a 'standard' PC monitor, and can be an asset in any competitive fast placed gaming title with smoother motion and better targeting. In case you are wondering, yes these monitors feature VRR tech. The Philips 242E1GAJ monitor features AMD FreeSync Premium, while the Philips 272E1GAJ offers Adaptive-Sync to eliminate game image tearing. Philips doesn't mention whether either of the 24- or 27-inch models are G-Sync compatible.

Key specs of the Philips  272E1GAJ and 242E1GAJ are the tabulated below: 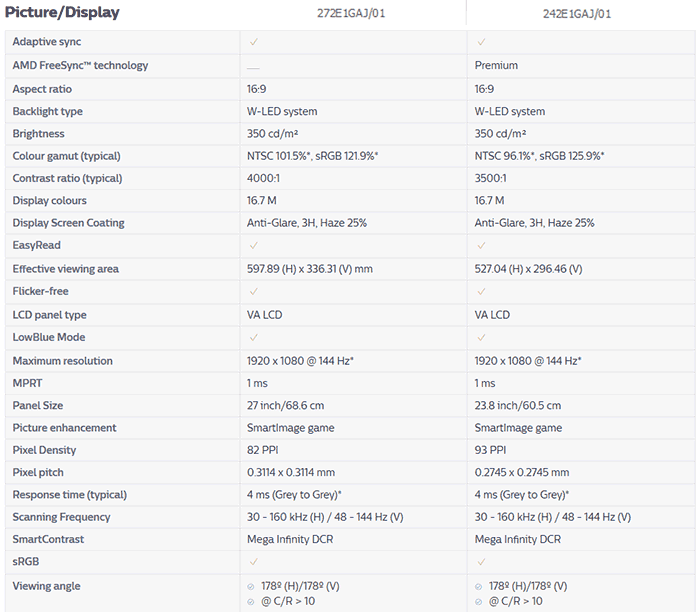 Going beyond the hardware Philips has implemented various OSD features for gamers. Various game modes are present which are tuned for the type of game being played such as FPS, RTS, Racer, etc.

There are some minimal aspects to these designs, probably to keep the price down but they both feature built in stereo (3W x2) speakers, which is convenient. There are just two video input ports(1x DP and 1x HDMI), plus PC audio in and audio out ports. The stand only adjusts for tilt (-5/20 degrees), but these monitors can be used with third party standard 100x100 VESA mounts if you wish. 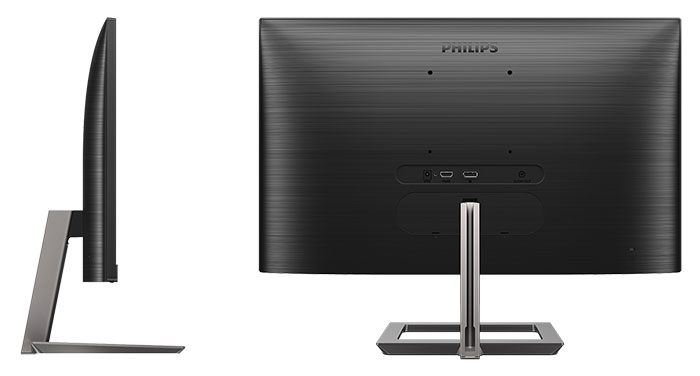 It only has a single joystick button on the back to control and manipulate everything including powering off so it takes getting used to. You can blank the screen and it goes into power saving mode which is not the same as full off but for normal use it works.. I am replacing a 24 philips TV which I got because I could not get a 24 monitor at the time. They had 21 and 22 but I already had a 22 monitor and wanted bigger but seems it was not in fashion. But a TV has over scan mode so text wont be clear until you run a monitor calibration program which sets it to the proper mode is pixel to pixel instead of the TV translation. For some reason would flicker when ever anyone turned on their tube lights in the neighbourhoods.. But this seems to have been fixed now.

Says max resolution is FHD at 75Hz.. I set it at 50Hz to conserve bandwidth with a 10 meter long cable. I also had to reduce brightness from 100 to like 25 because it was too bright.. Same with contrast.. On my Philips TV that was set to 40 and 35 instead of the 25 and 20 on this. And since the power supply is external you have the power brick to carry around which usually is built into the TV set itself. Its a 19V 2A supply kind of like the ones you get with external hard drives…

Many people seems to have trouble with tearing.. Which I have never seen.. But I know for fast action games it happens.. But for watching movies and such, you dont see it. But I have noticed that some companies try to fix this and the fix seems to be the cause of lagging and tearing. Even on this I caught it a few times when I moved the windows around but it happens very rarely. Everything is smooth during normal use. Also it says normal power requirements is 10W which is slightly lower than my old one.. And highest is like 20W at full brightness which would be clear in direct sunlight.. There is no bleeding or curving and such either.. I was going buy the AOC which is on sale for 10% lower than this but many complained about lagging so I got this. The blue light filter just seems to make everything yellowish and much brighter so I turned that off.. You can also set the tingle to the proper K value you want from like 2500 to 8000.. 2600K would be too blue but seems much easier on the eyes even with the fear of UV rays.. While 7500K would be like yellow..

For around 8000 this is definitely worth the price.. Although I seen TV with FHD for under 5000 now.. Philips is not worry free but its not worrying like buying chinese clones.. All previous monitors I had were samsung which lasted decades.. Even cheap LG lasts but its not as robust as the samsung which are like tanks but those were a while ago.. This one seems fragile since its so small and light and will have to see how long it lasts.. The problem is there are bugs which east the screen in tropical climates just like they eat DVD's.. I had an AOC which developed this problem of missing the background.. Any LCD screen seems to attract bugs which eat this.. Only way to prevent it is to place air tight covers on which is not always possible. Pretty hard to replace this background screen as well..
Posted by nobodyspecial - Fri 18 Sep 2020 21:38
You lost me a 16:9.
Posted by DevDrake - Mon 21 Sep 2020 09:38
Philips, please, just go back to your 4k 40+" lineup.
4ms g2g sounds like smudging
Posted by anees2201 - Wed 23 Sep 2020 22:02
thanks for information