You are here:
Monitors Software News

Low blue light hardware is now often complemented with OS support to provide warmer tones in the evening time. In Windows 10 you don't have to find a third party software accessory to schedule colour temperature adjustment as the sun sets - there are the built-in Night Light settings controls. My Android smartphone offers a similar scheduled colour temperature adjustment of its OLED display. 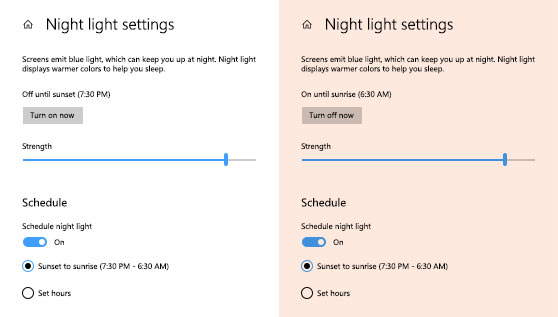 So, after about six years I now have a smartphone, desktop and laptop computer that all auto-adjust colour temperatures and reduce blue light only to read that researchers at Manchester University reckon that "the common view that blue light has the strongest effect on the (body) clock is misguided"…

In a news release on the University of Manchester website we are told that "contrary to common belief, blue light may not be as disruptive to our sleep patterns as originally thought." From tests on mice the researchers have done, dim cool lights in the evening and bright warmer lights in the day are probably more beneficial to health and well-being.

Dr Tim Brown from the university said of the new study, published in Current Biology and funded by the Biotechnology and Biological Sciences Research Council, showed "the common view that blue light has the strongest effect on the clock is misguided; in fact, the blue colours that are associated with twilight have a weaker effect than white or yellow light of equivalent brightness".

If you want to read more about the research you can head on over to the blog, linked above, or check out the full paper at Current Biology: Cones Support Alignment to an Inconsistent World by Suppressing Mouse Circadian Responses to the Blue Colours Associated with Twilight.

How do you know that for sure, though?
Posted by cheesemp - Wed 18 Dec 2019 14:37
I specifically replaced my old monitor for a low blue light model this year for this very reason so I'm really hoping this isn't true. I found using my PC at night use to wake me up. I've had low blue light on my phone for the same reason. I think it must have some affect as I have found it easier to fall asleep in some circumstances (but that could just be exhaustion from children waking me at night).