Last month we reported upon Asus readying an updated range of AMD B450 motherboards for release later in October. Now Asus has emailed HEXUS with details of a BIOS update coming to its large portfolio of 500-Series motherboards in order to offer full support for AMD's latest and greatest Zen 3 processors, AKA the Ryzen 5000 series desktop CPUs.

Below you can find a table of all the existing 500 Series motherboards from Asus which will be getting the Zen 3 optimised BIOS updates - this is all of the models which it has sold.

The ROG Crosshair VIII Dark Hero AMD X570 motherboard is the first in the stable to implement a completely passive cooling design. TO dissipate any heat from the chipset it features featuring a sizeable heatsink that extends from the chipset zone to the space between the PCIe slots. Additionally the board's onboard power delivery has also been enhanced with a VRM featuring 16 TI (90 amp) power stages arranged in a teamed topology. 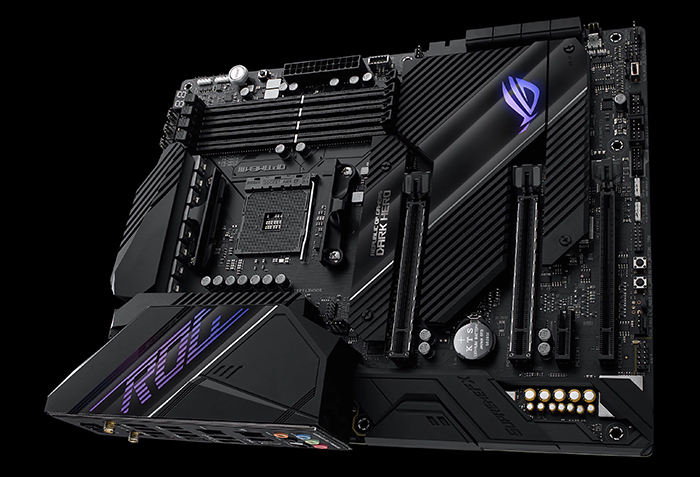 This X570 board's two primary PCIe 4.0 x16 slots are reinforced with SafeSlot. Nearby are two PCIe 4.0 x4 M.2 slots for fast SSD storage. On the topic of expansion, the backpanel has a good spread of USB 3.2 Gen 2 ports (seven Type-A, one USB Type-C) are available for high-speed peripherals, while the Intel Wi-Fi 6 AX200 adapter, 2.5G and gigabit Ethernet provide perky network connectivity. A SupremeFX S1220 codec, paired with an ESS ES9023 DAC for the front-panel outputs is on board for sound, and there is a front-panel USB 3.2 Gen 2 header for modern chassis.

Read more about the Asus ROG Crosshair VIII Dark Hero AMD X570 motherboard on the ROG blog. Specs are tabulated at the bottom of this article.

Asus's TUF Gaming X570-Pro (Wi-Fi) has been launched too. Standout features are its 12 + 2 DrMOS power stages, a six-layer PCB, ProCool sockets, military-grade TUF components and the Digi+ VRM. Its enhanced cooling design ensures there are dedicated heatsinks for the chipset, VRM and M.2 slot, along with hybrid fan headers and Fan Xpert 4 software. 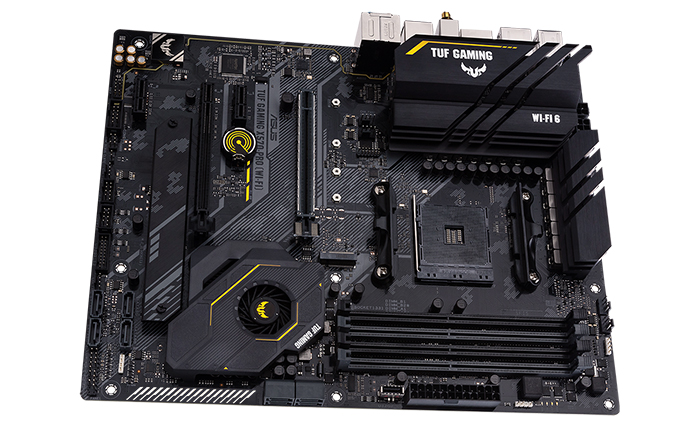 Connectivity aplenty is available inside and out with the TUF. Inside are dual PCI Express 4.0 M.2 slots with headers for USB 3.2 Gen 2 Type-C (1 x rear, 1 x front) and Type-A ports. For networking this board sports onboard Intel 2.5G Ethernet, Intel Wi-Fi 6, Bluetooth 5.1, plus TUF LANGuard and TurboLAN technology. Audio is catered for by the Realtek S1200A codec with embedded AI Noise-Cancelling Microphone too. 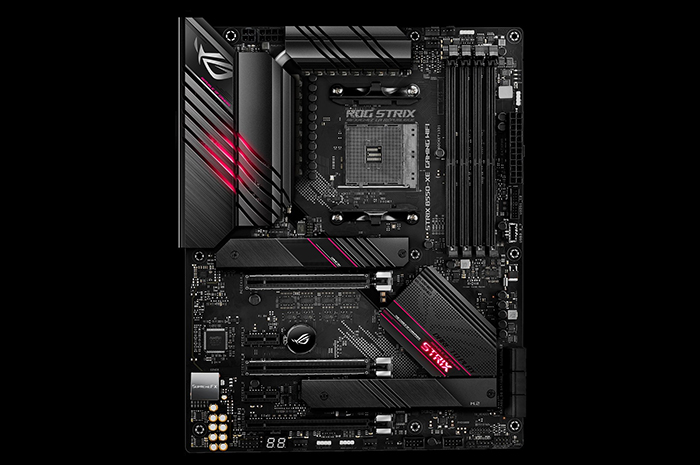 Other niceties of this B550 motherboard worth highlighting are its 2.5G Intel Ethernet, Intel Wi-Fi 6 AX200, BIOS FlashBack, and Aura Sync RGB lighting.