Asus has quietly updated its range of socket sTRX4 motherboards. The new entrant is the revamped Asus ROG Strix TRX40-XE Gaming, a powerful choice "for do-it-all builds for users that like to work hard and play hard," reckons the PCs, devices, and components maker. Key features of this ATX board are its support for AMD Ryzen Threadripper processors with up to 64 cores / 128 threads, 16 power stages, use of 70A capacitors, three PCIe 4.0 M.2 slots, the latest 2.5G Ethernet and Wi-Fi 6 networking, eight USB 3.2 Gen 2 ports, plus a range of ROG exclusive features.

As an update, it isn't surprising to see that most of the original models features have been carried through. The major change observable from browsing the product page and specs page centre on VRM.

Asus' original ROG Strix TRX40-XE Gaming motherboard featured sixteen of Infineon TDA21462 60A power stages. The updated design has strengthened this with 70A power stages, likely to be Infineon 70A TDA21472 units. Asus similarly updated its Zenith II Extreme Alpha, and introduced the Extreme Alpha at the top of that range with 90A power stages.

While the original ROG Strix TRX40-XE Gaming motherboard supported the top of the line AMD Ryzen Threadripper 3990X, including being very capable of overclocking, the new version will be able to handle more power and cope more ably when pushed to the extremes. 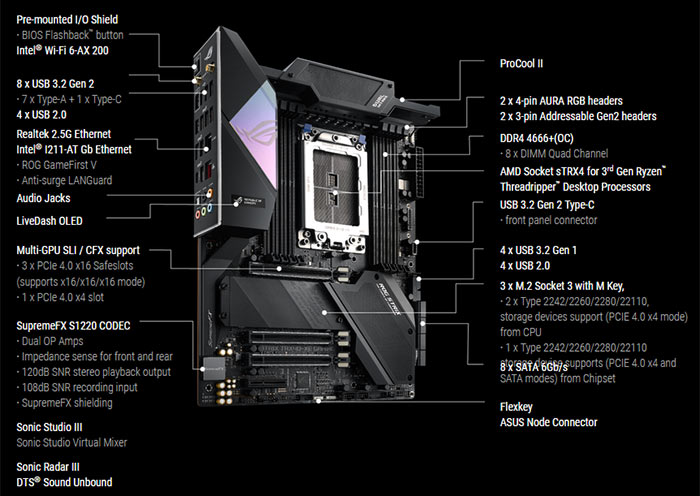 Official highlights of the Asus ROG Strix TRX40-XE Gaming motherboard, which appear to be the same as the previous model bar the VRM power solution is as follows:

You can learn more about the ROG Strix TRX40-XE via the official product page and specs page. 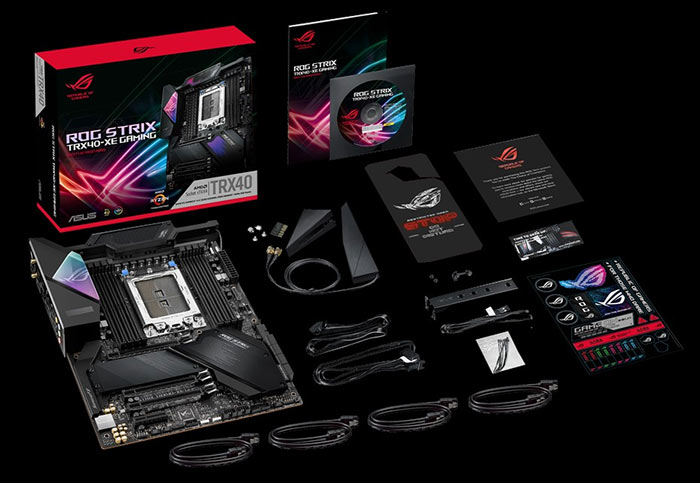 The Asus ROG Strix TRX40-XE is priced at USD$550/GBP£480. Potential purchasers might want to check with their choice of retailer that they are buying an updated model.

Friesiansam
Other than for bragging rights, why would you go with Threadripper for gaming?

Might be different when the XT versions come out!
Posted by [GSV]Trig - Wed 27 May 2020 14:45
If all they've done is bump the VRM's its just a revision of the original board surely, no point in harping on about it and needing more marketing etc?
Just change a single digit on the motherboard where the rev. bit is, simples, think of all the money saved
Posted by Gentle Viking - Thu 28 May 2020 03:40
Yeah for gaming alone it might not be the wisest move to jump the threadripper bandwagon.
But if you do other intense things on the side it might be nice to have a little extra.
But of course regular ryzen ships now have the same 12/24 core count as my threadripper have, so now its just the 8 populated RAM slots i got going for me. ( 64GB )
Of course you can do that too on a AM4 board with 4 X 16GB.
Posted by Quartz - Fri 29 May 2020 16:43
Needs 10 Gb ethernet.