Yesterday afternoon MSI indulged PC enthusiasts with a live streaming teaser session via its Twitter account. MSI execs Eric Van Beurden and Pieter Arts hosted the event which was scripted to provide "a sneak peak of all the future gaming products which are displayed at Computex 2019".

The chummy pair talked though a series of products which included the MSI GT76 Titan laptop, the Trident X Plus desktop, various Optix gaming monitors, and some gaming peripherals like mice, keyboards and even a chair for gaming PCs. In the content-creator targeted Prestige range we saw that MSI was planning the P100 desktop, and a new HDR 600 monitor for the Prestige family with Nano-IPS panel and 98 percent DCI-P3.

Interestingly, MSI showed off some new PC building components too. We got a peak at the Harpe 300 series chassis and the Sekira 500 series, as well as a Core Frozr S air-cooler for CPUs. Just one new graphics card was teased, but it will be a popular halo product for MSI - the RTX 2080 Ti Lightning 10th Anniversary Edition. 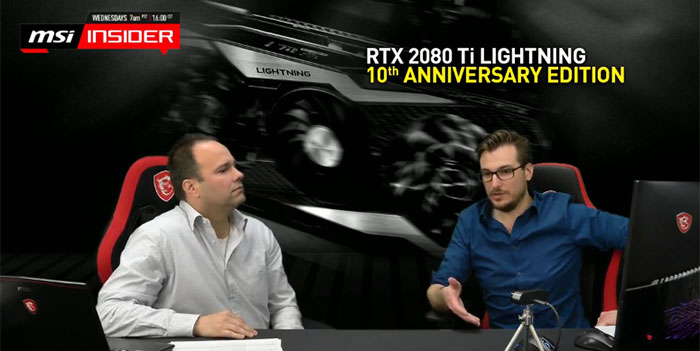 Back on Monday, HEXUS reported upon the leaking of a pair of AMD X570 motherboards, though it didn't describe them as such, they were just previewed as new upcoming AMD motherboards. In the live-streamed sneak peak video MSI previewed what will be the MEG X570 ACE and X570 Gaming Plus motherboards. The X570 Gaming Plus is as per the previous leak but the ACE has never been spotted previously. 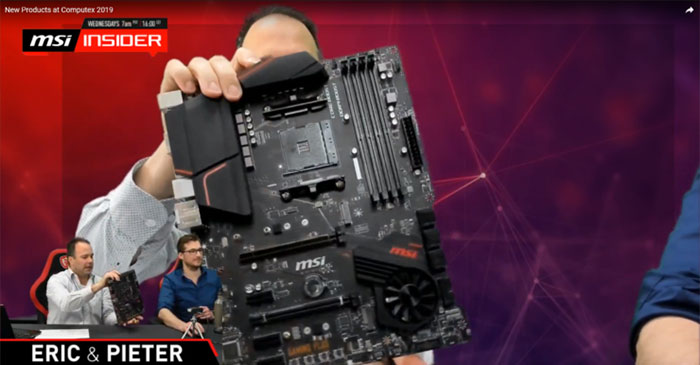 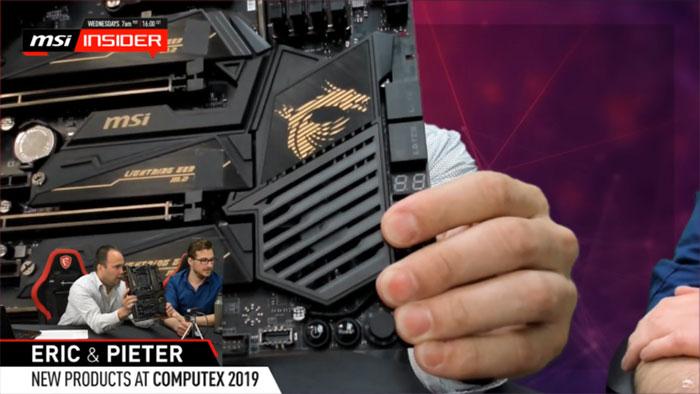 If you watch the YouTube video of the live stream (embedded top) you will note that MSI has edited out the motherboard section as it might cross certain reporting boundaries. Thus, I sourced screenshots for that section from Tom's Hardware and WCCFTech.

In related news an unofficial platform diagram for the AMD X570 chipset has been shared around the internet (Chiphell, HKEPC, TechPowerUp). The highlight for buyers of X570 motherboards will be support for PCIe Gen4. As TPU reports, "the X570 chipset appears to put out 16 downstream PCI-Express gen 4.0 lanes… two of these are allocated to two M.2 slots with x4 wiring, each, and the rest as x1 links". Please check the diagrams for more info.

The TDP of the chipset will be at least 15W, that's a threefold increase compared to X470, and the reason that all the leaked and previewed AMD X570 motherboards feature active cooling over the chipset.

azrael-
I have to be honest and admit that a 15W TDP for the chipset worries me. Considering it will almost certainly mean active chipset cooling makes me think about pairing a Ryzen 3000 with an X470 motherboard. Not what I had in mind.

Yeah I have to agree that it kind of seems weird to need active cooling on the chipset, been years since I've had to worry about the ‘whine’ of a tiny little fan.
Posted by MrJim - Thu 23 May 2019 10:55
Active chipset cooling is such a backward step. What's the chipset doing differently over X470, to justify a threefold increase in power consumption?
Posted by Tabbykatze - Thu 23 May 2019 11:00
Apparently it's all down to the pcie 4.0 signal doublers (i think, i can't remember and can't find the article i saw it on or it might have been Jim from Adored).

They really are hiking up the power and thermal requirements.

Active cooling is no biggy as long as they have decent fan profiles on that little thing so it works only when needes.