All MSI AM4 motherboards have new BIOS updates available. The new BIOS includes AMD AGESA Code 1.1.0.1 support for Raven Ridge APUs. Other improvements have been delivered alongside this compatibility update; both memory compatibility and PCIe device compatibility are said to have been boosted.

A Reddit discussion is the source of this update news and the same post includes over a 100 comments from various MSI AM4 motherboard users. Most of the comments are positive, regarding the features mentioned in the intro, especially the unleashing of faster RAM speeds, but there are a few that are experiencing issues with RAM voltages. Please check out the official MSI forum for other user comments too. 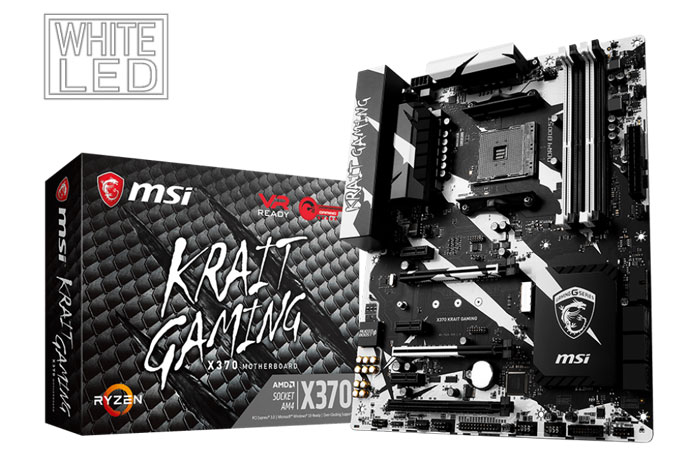 As there is no particular news post on the MSI site, and we haven’t received a press release, I’ve looked at the BIOS update file for the MSI X370 Krait Gaming to check through the readme.txt file. It appears that the new BIOS for this board, version 7A33v19, was finalised on 29th January and it offers the following:

AMD is due to release the Ryzen 3 2200G and Ryzen 5 2400G in the not-too-distant future. With an AM4 motherboard equipped with various video outputs on the back-panel users will be able to make use of on-board AMD APU graphics.

You can use my MSI X370 Krait Gaming BIOS link to find the updated BIOS for your MSI AM4 motherboard: there’s a ‘find another product’ search box at the top of that page.

Posted by Luke7 - Wed 07 Feb 2018 17:45
I was really excited for these… but isn't the next gen of Zen not too far away also? I'll be pretty annoyed if using an APU means pretty much being a generation behind at all times…

I understand development of them will take longer and cause delays, but its still a bit annoying when presumably the equivalent number of cores and performance will be available in newer ZEN architecture and a GPU for not a huge price hike.
Posted by Irien - Wed 07 Feb 2018 19:19
Luke7 - depends what you want. If you're looking for an APU (ie. AMD chip with decent built-in graphics) then you'll appreciate the current-gen Vega graphics cores in a competitively price package. If you don't need the vega graphics capability, then you may be better waiting for Zen+ CPUs later in the year. And yes, eventually there will be Zen+ APUs too… but by then Zen2 may be on the horizon. AMD admit that Zen+ is “low hanging fruit” - don't expect radical changes/improvements.

In other words, there's always something better in 6, 12, 18 months and at some point you just have to accept that the “current” product is really nice and bite the bullent.

Let's be honest, AMD need these APUs out there, as Intel's integrated graphics win them a lot of non-gamer sales simply because of cost/value (no extra GPU required). Right now, AMD's APUs are based on a (six?) year old core and GCN graphics. They badly need Zen+Vega in that space. Remember that every intel consumer CPU from pentium to i7 comes with built-in GPU which is enough for most non-gamers.

1) new bios is indeed out for my MSI B350 Gaming Plus, with Agesa update which includes APU support (and hopefully Spectre fix, we shall see!)

2) when my brother put together a budget R7 1200 system the GPU was a fair amount of the cost (even though he didn't really buy a gaming one, just basic bare bones) so the APUs will significantly reduce system cost for many while providing competitive 3D performance to budget GPUs…
Posted by Xlucine - Thu 08 Feb 2018 00:24

Luke7
I was really excited for these… but isn't the next gen of Zen not too far away also? I'll be pretty annoyed if using an APU means pretty much being a generation behind at all times…

I understand development of them will take longer and cause delays, but its still a bit annoying when presumably the equivalent number of cores and performance will be available in newer ZEN architecture and a GPU for not a huge price hike.

The zen+ CPU's haven't been announced yet, so the most advanced zen core money can buy right now is in the APU's (there's improvements to the power delivery, and probably other things). They also cost less (@RRP) than the equivalent zen CPUs, so CPU&GPU will command a considerable price premium
Posted by xslavic - Thu 08 Feb 2018 01:09
Installed bios update, some ipmrovements are noticeable.New Lan options appeared.I can run now at 2x16gb at 3066mhz .Also internet speed is very nice.Was laggy lately.
pc boots with 3066mhz ram the second time , maybe ill get to 2933 and lower latencys