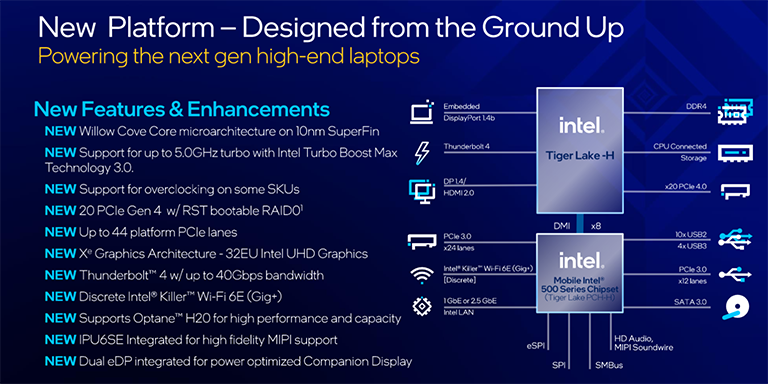 The quintet use the same Willow Cove CPU architecture built on 10nm SuperFin and mate it with basic Xe integrated graphics productised simply as UHD Graphics. This is to be expected as most laptops will use high-end mobile GPUs alongside these chips.

Key callouts are up to 5.0GHz peak boost frequency, 20 PCIe Gen 4 lanes emanating from the CPUs - 16 for graphics - or split various ways to allow for more M.2 - and four destined for the fastest NVMe drives, along with Thunderbolt 4 and Wi-Fi 6E.

You may think these have been seen before in the H35 chips, and that's true as the recently-reviewed Asus TUF Dash F15 employs the capable 11370H. 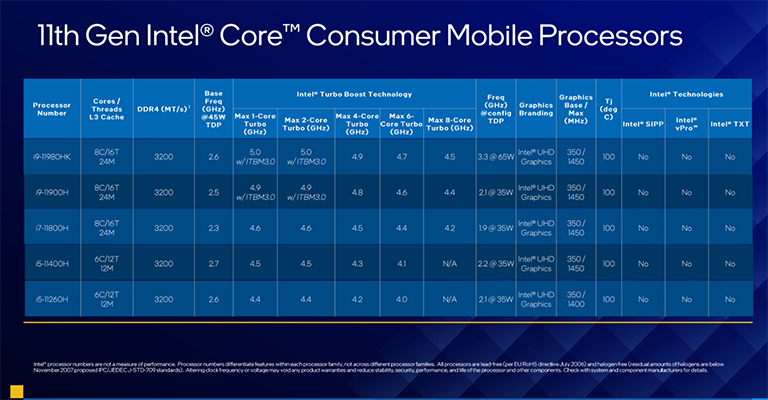 The number of cores and TDP are the main differentiators between these and the lower-power H35.

You'll notice the three top-performing chips all have the 8C16T topology present in the last-gen champions such as the Core i9-10980HK. The additional IPC is enough, Intel says, to give the 11980HK an average 10 per cent gaming advantage over its direct predecessor, but what's arguably more interesting is that maximum frequency is reduced from 5.3GHz on 10980HK to 5.0GHz here. Quite how that will play out in low-load CPU-centric tests is unknown.

One can disregard the nominal 45W power consumption, too, as the chips will pull way more juice than that when running CPU-intensive applications. The short-term PL2 state for the i9-11980HK, for example, is 110W, which is consistent with the last-gen 10980HK. 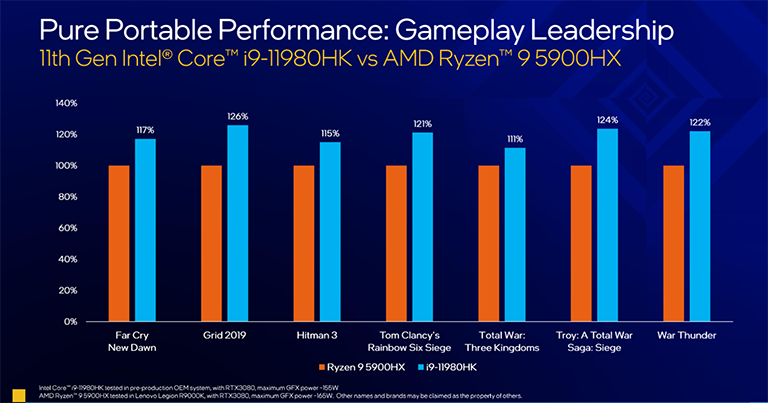 Intel's own testing reckons its best chip is fundamentally better at gaming with an RTX 3080 than AMD's premier Ryzen 9 5900HX. We'll have to find out for ourselves as said Ryzen put up a good showing in recent gaming tests.

In summary, Intel improves performance for full-on gaming laptops from the last generation by employing newer, faster CPU cores, a platform capable of PCIe 4.0 (AMD doesn't offer this presently), and goodies such as Thunderbolt 4 and cutting-edge networking.

Expect all of the major laptop brands to modernise their existing performance line-ups with an easy transition from 10th Gen Comet Lake to 11th Gen Tiger Lake processors. Notwithstanding the pullback on frequency, performance still ought to be around 10 per cent higher for all tasks, more so if applications take advantage of specific DL Boost technology in this generation.

What do you think? Does Intel do enough to cement its position as the go-to choice for high-performance gaming laptops, or are you more inclined to go premium Ryzen this time?

warejon9
I think the graphs are interesting. IS the better performance, simply due to the laptop using more GPU power, getting too hot, and throttling more?

It's almost certainly a fiddle, because it's Intel. The question is how much of a fiddle?
Posted by Tarinder - Tue 11 May 2021 16:47
These high-end mobile chips, consuming over 100W in bursts, tend to throttle a lot. The question is how quickly that happens. We'll only find out once a laptop arrives in the labs.
Posted by LSG501 - Tue 11 May 2021 16:57
HMM… the graph shows the gpu max power (which just happens to be 10w higher on the amd system to help push the narrative) but doesn't mention the cpu power draw and we all know that Intel will totally ignore their tdp's when allowed to.

Doesn't say anything about the oem cooling, drivers, os power management etc either….

Oh and all the (old) games in those graphs have been very selectively picked due to either favouring single core performance (intel still has the edge there, especially when boosting) or straight up not working well on amd hardware….

Tarinder
These high-end mobile chips, consuming over 100W in bursts, tend to throttle a lot. The question is how quickly that happens. We'll only find out once a laptop arrives in the labs.

We can only hope it happens just before new and exotic particles are created in the CPU and the universe collapses in on itself.