Compact computing specialist One Netbook is previewing its OneGx1. This is a 7-inch laptop which has more than a passing resemblance to the Dell Alienware Area 51m in miniaturised form. While One Netbook hasn't shared a lot of details about this upcoming product, Brad Linder at Liliputing has enjoyed some hands on time with a pre-production prototype and shared both a story and video tour of the product. I've embedded his video below.

I've distilled the key features of the OneGx1 into the bullet point list below: 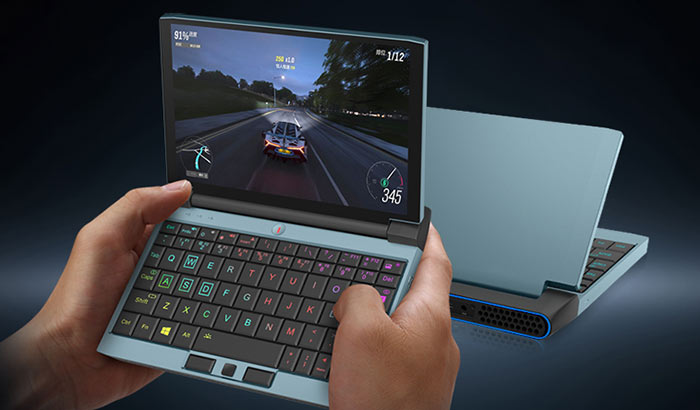 One Netbook will be selling a variety of configurations starting from US$839 for the 8GB/256GB Wi-Fi only model, up to $1318 for the 16GB/512GB with 5G module model. The detachable left and right controllers are sold separately for $45. eTailers such as BangGoogd and GeekBuying should have units pre-orderable now.

Tiger Lake version on the way

One Netbook originally intended to create this 'gaming laptop' using an Intel Tiger Lake processor which will come with Intel's stronger Xe graphics, with up to 96 EUs. Rather than wait the systems maker has decided to sell this Amber Lake version now, as a "5G cloud gaming" machine. This implies that the OneGx1 is only fit for light gaming duties, while AAA PC games would be better to stream using a service like GeForce Now or Stadia.

When the Tiger Lake model arrives it will be marketed as the OneGX1 Pro model. Other specs should be pretty similar. 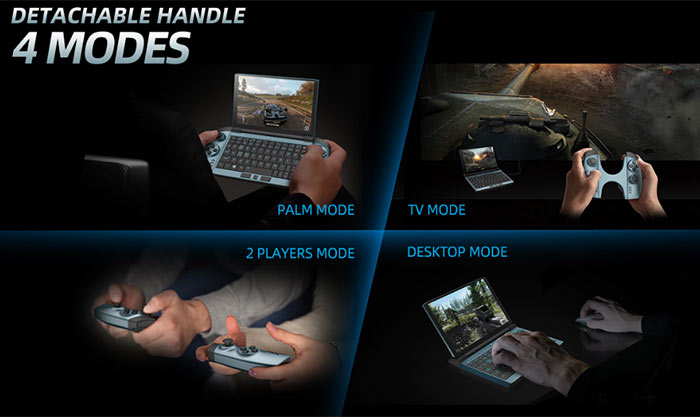 So, what kind of performance do you get for gaming locally? Liliputing had a dabble with its pre-production unit on a variety of PC games it installed. Lightweight titles didn't present a problem. However, games like Assassin's Creed: Syndicate at lowest settings and lowered screen res (to 1280 x 720 pixels), could only muster 5 to 7 FPS. Such titles will be better streamed over a decent internet connection.

Is a dual-screen laptop the ultimate WFH indulgence?

10 Modular 13.5-inch laptop by Framework up for pre-order

I bet a lot of them will end up running Bettercap, however.
Posted by sykobee - Mon 29 Jun 2020 14:30
In all certainly, getting a Switch would result in a better gaming experience for a third of the price.

5fps at 720p. Why. Sure, use this to play all those games you've collected from GoG and HumbleBundle over the years that don't need modern features… but all that money saved on games you've just spazzed on this device.
Posted by gagaga - Mon 29 Jun 2020 14:59
The exact device everybody says they want but nobody buys or uses. And I say that as a former owner of a Sony Vaio P.
https://hexus.net/tech/news/laptop/16824-sonys-vaio-p-series-netbook-rule-all-600g-joy/
Posted by DevDrake - Mon 29 Jun 2020 15:21
I just cant see any real need for such device.
- you can take it to vacation trip! - Well I prefer to enjoy the trip than staying in the hotel gaming =P
- you can take it with you on your business trip - Oh but I got full blown laptop then
- you can use it in public transportation! - Yes, as well as mobile
- you can … ?

There are people that will buy this device, and some of them will use it, but it is centrally not for me.
Posted by philehidiot - Mon 29 Jun 2020 20:34

gagaga
The exact device everybody says they want but nobody buys or uses. And I say that as a former owner of a Sony Vaio P.
https://hexus.net/tech/news/laptop/16824-sonys-vaio-p-series-netbook-rule-all-600g-joy/

I really, REALLY wanted a Jornada 720 back in the day. ARM processor running cut down Windows 2000. It was an awesome little device. But, I had several little things like this - Palm handhelds and so on. I used only one to its potential (a PDA which was made of metal and reminded me properly of a PADD from Star Trek). The rest were really a bit of a waste of money.

When smartphones with proper bluetooth keyboards came out, these kinds of devices died a death. You can just get a smartphone or a tablet and do similar things. If you want to stream, you can.

These kinds of things do have a place for sysadmins who need an x86 machine with a decent keyboard, some reasonable chooch factor and want it in a small package they can sling in a backpack. Hence me saying they'll be running Bettercap.

As a gaming package - if you're relying on 5G streaming, why not just use a smartphone? If you're not getting enough FPS to run anything decent, why not just get a cheapo Windows 10 tablet/laptop with keyboard for £200-£300? They'll run old games if you want them to.