An as yet unannounced Comet Lake-H processor for powerful desktop replacement and gaming laptops has been spotted in the 3DMark benchmarks online database. An Asus branded machine is purported to come packing an Intel Core i9-10880H processor, the successor to the i9-9880H Coffee Lake-H chip from Intel.

Like its predecessor, the 14nm Intel Core i9-10880H will sport 8C/16T. The base clock remains the same, at 2.3GHz, but the max turbo is increased from 4.8GHz to the magic 5.0GHz with the Comet Lake generational tweak. There aren't any significant architectural changes expected and this new upcoming mobile processor will continue to offer 16MB Intel Smart Cache and a TDP of 45W.

Within its current generation mobile H-series Coffee Lake processors Intel offers not just the Core i9-9880H but also a slightly faster Core i9-9980HK with 100MHz faster base and 200MHz faster boost clocks. We can't be certain if Intel will bring out a Core i9-10980HK or not.

As you can see in the source tweet, the new Intel mobile H series chip features in an Asus built laptop. Other key attractions of this device include the Nvidia GeForce RTX 2080 Super (Laptop) GPU. This GPU has a 1,365MHz base clock, and is accompanied by 8GB of 14Gbps GDDR6 RAM.

If you are interested in these powerful new laptops, a recent promo image prematurely released by a Chinese OEM on the Weibo social media platform provides release date indications. Mechrevo advertised to its fans / followers that they would be able to grab laptops featuring the potent combination of a 10th Gen Intel Core processor and Nvidia RTX Super mobile GPU from 2nd April 2020. 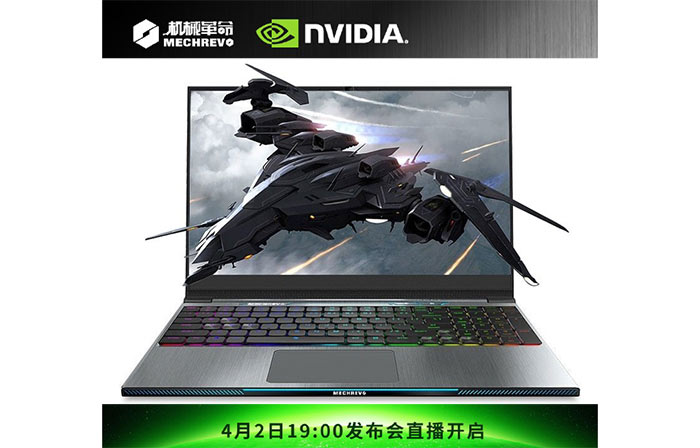 Bugger off, it'll do a TVB for a femtosecond before setting fire to your lap. Either that or that isn't a laptop and is a portable desktop class cooling system with a handy flip out screen!
Posted by Xlucine - Wed 25 Mar 2020 16:51
base is rather low for a 45 W chip, the 4800H will be hard to catch in multi-threaded loads
Posted by aniilv - Thu 26 Mar 2020 21:26

Xlucine
base is rather low for a 45 W chip, the 4800H will be hard to catch in multi-threaded loads

i thought ever since ivy bridge they no longer actually run at base but instead thermals in mind it will run 3ghz easy?