Earlier today AMD launched its Ryzen 4000 series (Renoir) mobile processors. It is well worth reading through our deep dive of this new processor series now, if you haven't already, to provide some background to this laptop announcement. Of course we need systems makers to launch devices that make use of these chips, to show the potential on offer, and to allow us to compare AMD's claims of power and efficiency with reality. Thus HEXUS will be reviewing Renoir laptops in the coming weeks.

One of the first OEM partners out of the door with its AMD Renoir laptops is Lenovo. Specifically, it has launched the Yoga Slim 7 (known as the IdeaPad 14 in the US) which is built around AMD's Ryzen 7 4800U processor. The Ryzen 7 4800U is currently the U-series flagship and comes packing 8C/16T 'Zen 2' cores with 1.8/4.2GHz base boost, 12MB of cache, and eight 'Vega 7nm' graphics cores running at up to 1.75GHz, all in a TDP of 25W in this example (processor is OEM configurable between 12-25W). 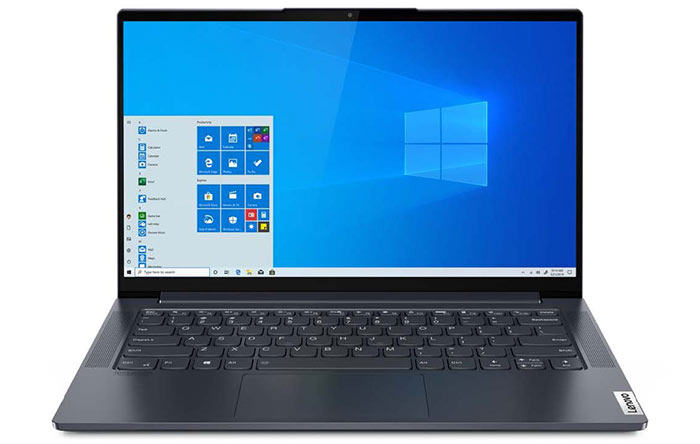 AMD and Lenovo herald the new Yoga Slim 7 as "the world's first 8-core Ultra-thin". Now it has been brought up, it is worth summarising the physical qualities of this laptop. It measures 14.9mm thick and weighs in at 1.5kg. Within the svelte frame, which has been engineered to comfortably host the 25W APU, is a system packing the headlining 8C/16 T processor with Radeon Vega 8 graphics, supported by LPDDR4x memory.

Lenovo has invested in some capable audiovisual support components for the new Yoga Slim 7. The 14-inch screen used is a FullHD IPS panel with 100 per cent sRGB coverage. Lenovo says it offers high frame rate graphics, and the display is FreeSync compatible. At the time of writing I don't have the refresh rate range supported. Dolby Vision support is on its way in a software update later this year. For the complementary audio, Lenovo has fitted this ultrathin with a front facing Dolby Atmos speaker system. 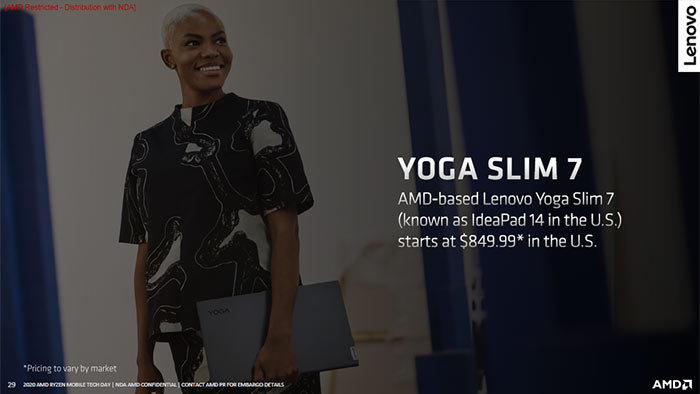 Lenovo is marketing the Yoga Slim 7 as the IdeaPad 14 in the US where it will become available for US$849. As the HEXUS editor said in his Renoir deep dive, we will be reviewing one of these promising new thin and light laptops in the coming weeks.