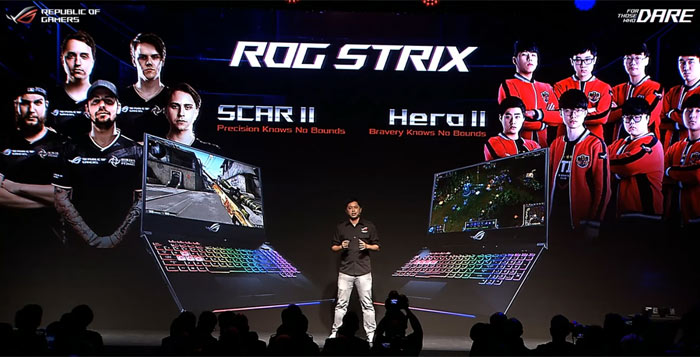 Probably the most striking change delivered to the RoG Strix GL504 design is via the minimal bezel display now equipped in all models. If you look back at the previous GL503 you will immediately see the difference. Though the top and side bezels are indeed slim the bottom one is rather chunky - but Asus has made a feature out of it with a substantial ROG logo and placing the webcam and microphones there.

The slimmer bezels might have stolen the headline but that isn't the end of the impressive new display properties; users have the choice to buy the Scar II with an 100 per cent sRGB FHD IPS panel sporting 144Hz refresh rate with 3ms GtG response time. Meanwhile if you opt for the Hero II there is that same choice or a 60Hz version if you don't need the super-fast refresh panel.

Despite their compact footprints the new laptops feature full sized keyboards with numpads. Asus has RGB LED enhanced the keyboards (Aura Sync compatible) and they are built to last - with a lifespan of 20 million key presses. Other attractive features of the keyboard are its 1.8 mm of key travel, overstroke technology (with raised actuation point), and four dedicated hotkeys configurable in the ROG Gaming Center application.

If you like the look of these laptops you will be able to snag the Scar II from $1999, while the Hero II starts at a more reasonable $1699.