AMD has announced its ambition to increase the energy efficiency of processors running AI training and high performance computing applications 30x by 2025. Industry-wide we expect efficiency improvements in the same timescale, but if AMD's goal is reached it will outpace the throng by 150 per cent. It is good to see AMD have the confidence to publicly announce this goal, and it implies it has some great new technology in the pipeline between now and 2025. 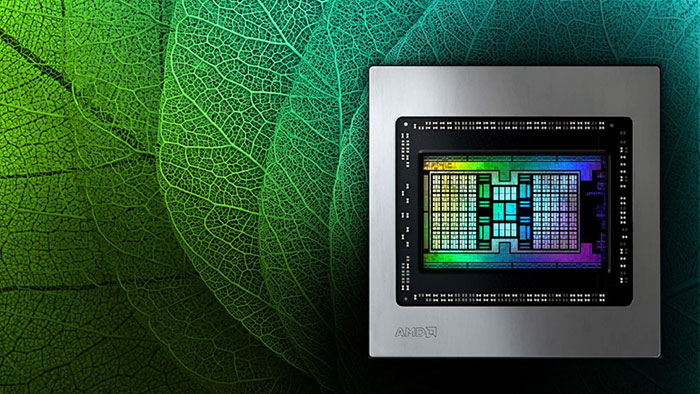 The progress made by AMD in accelerating compute nodes will deliver benefits in many fields like material sciences, climate predictions, genomics, drug discovery and alternative energy. Moreover, AI training progress in speech recognition, language translation and expert recommendation systems are set to benefit. As well as faster processing, the headlining goal of '30x by 2025' means that "billions of kilowatt-hours of electricity," could be saved by 2025. Put another way, AMD says that it is reducing the power required for AI and HPC systems to complete a single calculation by 97 per cent over five years. 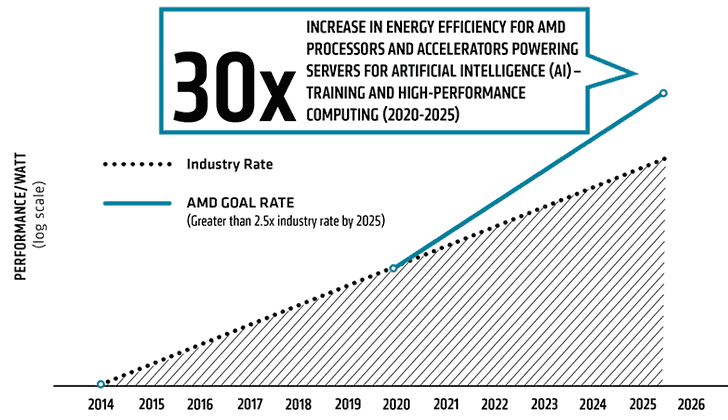 An interesting point was made about AMD's '30x by 2025' ambition by Addison Snell, CEO of Intersect360 Research. Snell said that such gains are now more difficult than ever due to the historical advantages that come with Moore’s Law being "greatly diminished". Indeed, efficiency gains from process node changes are smaller and less frequent than earlier in the history of modern computing. Thus, '30x by 2025' is going to be "an impressive technical achievement that will demonstrate the strength of AMD technology".

If AMD's '30x by 2025' ambition sounds vaguely familiar, you might be recalling the '25x20' ambition it outlined in June 2014. This was AMD's six-year goal to improve the energy efficiency of its APUs by 25x by 2020. Yes, it worked out for team red – as you can see from the video embedded above, AMD claims it actually improved APU efficiency by 31.7x in the set time period.

While the latest efficiency pledge concerns AMD's business and enterprise Epyc CPUs and Instinct accelerators, consumers can be happy that efficiency and performance advances in these products should correlate with similar gains in consumer products.

It was shown with dedicated cpu's for things like bitcoin mining that dedicated hardware can reduce the power draw relatve to performace quite considerably.

In the right programs it's far more efficient to run a multiple gpu's and make use of cuda for things like 3D rendering compared with the older approach of lots of cpu cores.

So I'd expect to see more ‘AI cores’ added to the cpu designs, similar to what Apple did with the M1 design, which are dedicated to certain tasks and can do it much faster than the universal ‘main cores’
Posted by DanceswithUnix - Thu 30 Sep 2021 16:14

LSG501
So I'd expect to see more ‘AI cores’ added to the cpu designs, similar to what Apple did with the M1 design, which are dedicated to certain tasks and can do it much faster than the universal ‘main cores’

That sort of AI chippery has been in phones for years, but that isn't what AMD are talking about here.

Training a deep learning net is really really computationally expensive. The stuff on phones is just using a trained net, where you can take a lot of shortcuts.

The thing is, I don't see how the AI training market is all that large. Not when the likes of Google make their own silicon. So that gets us to where we already are, tweaks on existing GPUs to train networks. Things like HBM and lots of ram help, and that trick where AMD attached an SSD to the GPU,

I wonder if part of this is thanks to Samsung using AMD's GPU designs. That may have focused somewhat on lower power usage.
Posted by bae85 - Fri 01 Oct 2021 09:56
Aggressive strategy, going to blow Intel out of the water, I like it!