Arm, with the help of PragmatIC, has built the world's first natively flexible 32-bit Arm microprocessor. It says that this advance will be of importance to a diverse range of markets and use cases like smart sensors, smart labels and intelligent packaging - and many IoT applications. Previously it was only possible to fabricate smaller and simpler flexible components like sensors, memories, light-emitting diodes, near-field communication/radio frequency identification and printed circuitry such as antennas using plastic.

Arm's close work with PragmatIC began in around 2013 and its first fragrant fruit was the completion of their PlasticArmPit project – creating an 'eNose' odour sensor. This success and the foundation built upon its cell library, tool flow and process technology inspired the pair to try and make the world’s first fully functional non-silicon Arm processor, PlasticArm. On Wednesday, Arm announced the PlasticArm project had been a success and sees a future in "bringing the possibility of seamlessly embedding billions of extremely low-cost, ultra-thin, conformable microprocessors into everyday objects," said to be a significant leap forward in realizing the Internet of Things.

If you have read this far, you are probably interested in the first PlasticArm processor specs. Above, you can see a PlasticArm block diagram (a) and the regular Cortex-M0 CPU compared to the PlasticArm version (b). The image below shows you the die layout of PlasticArm with important SoC blocks highlighted (c), and a micrograph of an actual PlasticArm chip with dimensions (d). 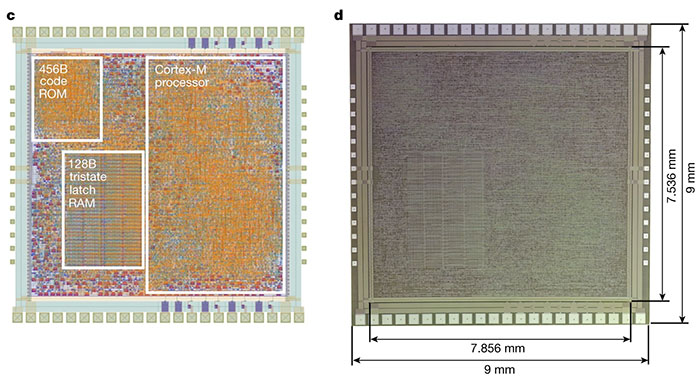 You might consider the PlasticArm to be rather puny. The SoC based around the Cortex-M0 runs at just 29kHz, powered by a 3V power supply, sipping 21mW. Moreover, its built-in RAM is just 128 bytes, and ROM just 456 bytes, with the whole SoC fabricated on PragmatIC’s 0.8μm process on a 200-mm-diameter polyimide wafer – to create TFT circuits. However, this is still a big achievement for a plastic processor, featuring 56,340 NMOS transistors and resistors, and being 12 times larger than any plastic electronic predecessor.

Going forward, a key challenge will be to boost performance while keeping the power consumption and heat dissipation in check. Obviously, plastics aren't as thermally robust as materials like silicon. The researchers are looking to scale up too, with Arm developing cell libraries to support PlasticArm chips over 100,000 gates.

A lengthy paper on the natively flexible 32-bit Arm microprocessor has been published by Nature.

philehidiot
So, what you're saying is… it can't play Crysis?

Who needs Crysis, when you can play Daley Thompson's Decathlon and destroy a few joysticks with frantic waggling :D