The USB Implementers Forum (USB-IF) has announced USB Type-C cable and connector specification revision 2.1. Within the revised spec the key change appears to be in the upgrading of the USB Power Delivery from 100W maximum to 240W. This change should hopefully mean that all but the most powerful laptops will benefit from an alternative charging method when for some reason the owner doesn't have the supplied charger at hand. The uplift from 100 to 240W max may be capable of powering larger monitors and printers too.

In the latest specification documentation the uplift to 240W PD is described as an option called Extended Power Range, or EPR. There are already some chargers supplied with devices that have busted the previous 100W limit, like a USB-C Dell laptop dock (130W), but it uses a captive cable to prevent use willy-nilly.

The problem with 100W PD is that it is just a little anaemic for some mainstream laptops, never mind gaming goliaths. Sometimes modern laptops with USB-C allow trickle charging or for the user to maintain the charge using a USB charger when the original power brick is absent, but this isn't always the case depending on laptop brand/model. 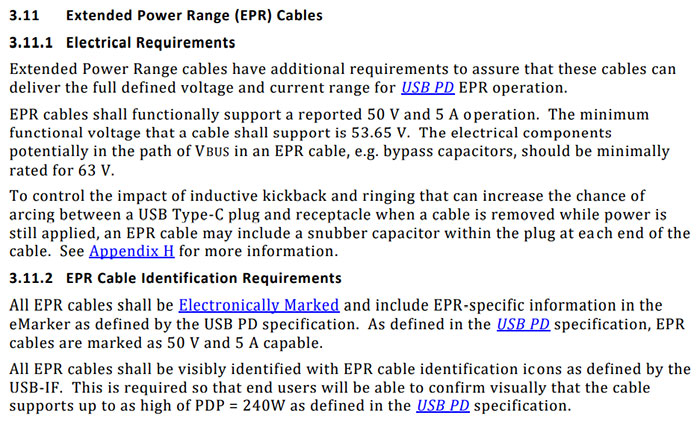 One of the most powerful modern laptops that has been in the HEXUS labs, the Asus ROG Strix G17 G713Q, comes with a 240W power brick, so could in theory be adequately powered by a new USB-C 2.1 spec charger, but I don't think its Type-C port is compatible, it doesn't include the PD icon next to the port either.

Of course, you will need new USB-C chargers and cables to make use of the new EPR specification. With a standard ports like the reversible USB-C design there is probably going to be a problem with users trying under-spec cables but the USB-IF says that "All EPR cables shall be visibly identified with EPR cable identification items".

Posted by Ulti - Wed 26 May 2021 14:50
This is really interesting stuff, not only for laptops but think of desktops too - especially mini ITX and so on.

Maybe not so relevant for the latest power hungry GPUs but my desktop with a Ryzen 5 3600 and GTX 1070 consume around 250W at 100% load. In theory if I underclocked a bit, I would not need a standard PSU and my whole PC could be powered by USB-C. Obviously not quite so straightforward due to the 24 pin CPU plug, 8 pin CPU, 8 pin GPU plug all needing power but potential is certainly there.

I wonder how big the wall plugs/adapters will be for these and how efficient/hot they will run. I bought my gf one of those 65W GaN PD plugs for her laptop as it support PD and it's a neat little piece of work. Doesn't heat up too much either from what I remember but haven't done much testing in all honesty.

EDIT: Did some quick googling and saw this 240W PD charger:
https://www.indiegogo.com/projects/the-smallest-240w-laptop-charger-with-pd-3-0#/

Looks like they'll still be pretty compact and it quotes a 94% efficiency rating so in theory, assuming that means 240/0.94 = 255W drawn from the wall, it should be 15W to dissipate as heat which shouldn't be too bad.

CAT-THE-FIFTH
I hope there is reliable certification for cables otherwise I can see a lot of fires happening.

Indeed, I won't be buying those sorts of cables off Ebay/Amazon…

Interestingly, I recently decided that a travel power strip off Amazon was probably dangerous and opened it up. No fuses anywhere, stray bits of wire dangling around the live connections and soldering that made even me nervous… and my soldering is awful. It was one of those multi-sockets which takes loads of different international plugs. As a result, they usually bypass a lot of the safety features for compatibility's sake and not having a fuse anywhere (not even the plug) is an utter disgrace.

kompukare
Wiki says the voltage for USB power deliver is 20V, so to get 240W that's 12A.
Those had better be some thick cables.

You've not read the article fully, have you ;)