Intel apparently gets a hard time from customers and investors about the way it describes its process technology in numerical terms. I remember four years ago the company made a point of stressing that its 10nm process was a "full generation ahead" of rivals. Of course, we are still waiting for 10nm desktop processors from Intel, but that is another, though probably closely related story. A chart from the 2017 Technology and Manufacturing Day in San Francisco is reproduced below. 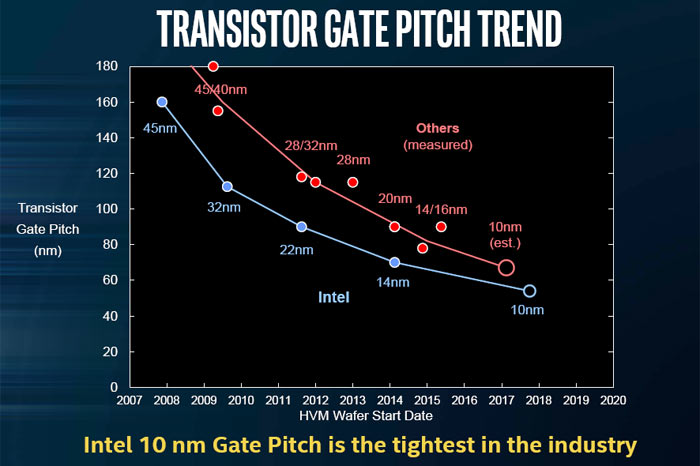 Yesterday a story was published by The Oregonian, citing Intel insider sources that had received communications from Ann Kelleher, the Hillsboro vice president who runs Intel’s manufacturing group. It was a notification that "Intel plans to change its numbering conventions to match the industry standard," reports the newspaper.

Intel clearly isn't going to be renaming its 10nm SuperFin process as it is already firmly established in its marketing and resource materials. However, we don't know of any confirmed 7nm Intel manufactured processors as yet, so it is feasible that they could be the first to be renamed. Going forward Intel could describe its destined to be 7nm output as 6 or even 5nm output, to match the industry standard it feels it would be beneficial to follow.

As the Oregonian reports, Intel has suffered a string of manufacturing failures leaving it treading water, stuck at 14nm for several years when it would previously have tick-tocked along and been much further ahead in this respect, had things gone to plan.

One could jump to the conclusion that Intel is in such a state that it is concerning itself with names and numbers now – on gloss rather than engineering. However, the renumbering/measuring won't just be for the benefit of Intel's upcoming processors, as CEO Pat Gelsinger has announced his IDM 2.0 plans and the Intel Foundry Services business – making chips for third parties. Those third parties, or more precisely the consumers who buy their products, are more likely to be swayed by the renumbering scheme, where devices with processors made by Samsung or TSMC, for example, sit side by side on shelves.

CAT-THE-FIFTH
,and their 10NM process node is closer to TSMC 7NM in certain aspects.

Some aspects yes, but the “good yields” vs “barely usable” is probably the key metric here. That and Intel's 10nm sucking for desktop performance (to be fair, TSMC 10nm was mobile only as well, you can't win them all).

But hey, the computer industry has always had a fair dose of carefully chosen benchmarks :D