You are here:
Industry Peripherals News

The announcement that the PCI SIG has reached revision 0.3 of the PCIe 6.0 specification is rather light on technical details. It reiterates the information we had back in June, that the technology will "double the data rate to 64GT/s while maintaining backward compatibility with all previous spec generation." Furthermore, PCIe 6.0 "includes PAM-4 (Pulse Amplitude Modulation with 4 levels) encoding and low-latency Forward Error Correction (FEC) with additional mechanisms to improve bandwidth efficiency," relays the blog post. 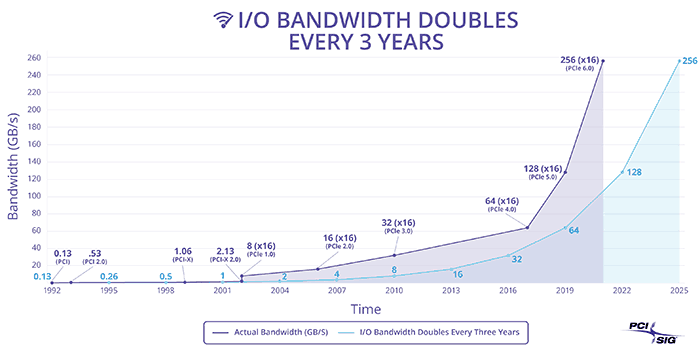 For some background info, the 64GT/s figure refers to GigaTransfers per second over the interface. That equates to roughly 256GB/s of bandwidth (or 128GB/s in each direction), as you can see in the official PCIe standard comparison graph, reproduced above. The above graph also demonstrates that the PCI SIG intends to keep pressure on the standard's development and not leave a big gap between revisions, as witnessed with the transition from PCIe 3.0 to PCIe 4.0.

2021 isn't very soon, considering that the PCI SIG and its working group of 800 industry-leading member companies appear to have got almost a third of the way there in just a few months. However, we can't expect such a development, consultation and coordination process to be perfectly linear.

Friesiansam
With PCIe 4 coming in to use now and PCIe 6 so close to ratification, surely 5 is dead in the water.

lumireleon
so NvLink is dead?

Well NvLinks run at less than pci-e 3.0 speeds, so it has always been dead for gaming (Though better than the sli). Single GPU for the consumer is where it'll always be.
Posted by chj - Wed 16 Oct 2019 15:15
Will anything in the next few years be able to utilise this extra bandwidth?