Intel's 10nm woes have been well covered here on HEXUS, and in a wide range of tech and business publications. Earlier this week, at Fortune's Brainstorm Tech Conference in Aspen, Colorado, the question of why Intel's 10nm process processors are now about five years late was put to Intel CEO Bob Swan. In one of his first public appearances since being named permanent CEO in January, Swan was quite open about the fact that Intel had gambled, been over-ambitious, as usual - but it didn't pay off with the 2.7x scaled 10nm process.

During the interview on stage in Aspen, Swan acknowledged that Intel had been too ambitious with its plans to move from 14nm to 10nm so quickly, Swan starts his answer by suggesting that previously Intel had been able to "defy the odds" in scaling but "At a time when it was getting harder and harder, we set a more and more aggressive goal. From that, it just took us longer." 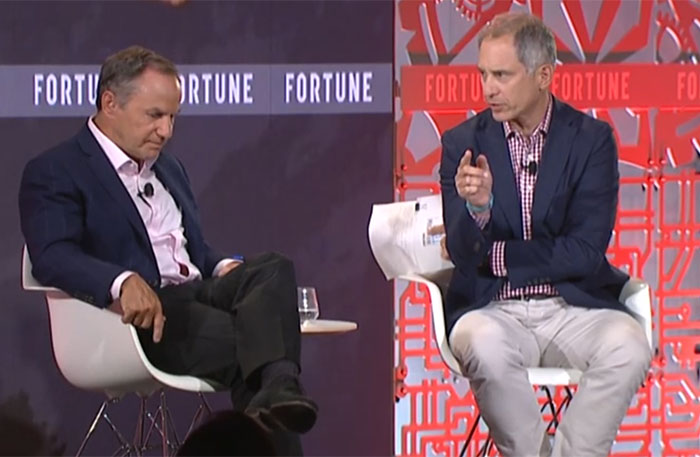 Intel problems have been compounded by competitors that have had some 'luck' it seems. AMD and Nvidia leapfrogged ahead, reports Fortune, as the outsourced foundries advanced their process technologies without significant hiccups and are now at 7nm with plans to progress to 2nm already public - in TSMC's case. These advancements are reflected in share price movements in recent years/months.

Looking forward, Swan told the interviewer "The short story is we learned from it," and the 7nm node with less ambitious 2.0 scaling will be out two years after its 10nm processors become mainstream (later this year).

At a time when it was getting harder and harder, we set a more and more aggressive goal. = We were extremely complacent, blasé and cocky with our ability to overcharge for minimal technical progress (although they did try to expand into other areas to maximise growth, ie. they attempted to buy their way into the mobile / tablet space, etc.)

Amd and their ‘luck’ = We were force to heavily reduce illegal activity after being publicly fined (a trivial and very insulting amount when you consider the damage they have done) and our competitor, after being forced into an impossible situation as a DIRECT result of our illegal activity, managed, against all odds, an absolute master stroke of engineering and strategic business planning, with their extremely lean team.
Posted by Yoyoyo69 - Thu 18 Jul 2019 12:57
When I speak my mind, often I feel it is taken as an exaggeration, but if you look at these last couple of years, it looks more and more that I have been correct.

My thoughts were that, whilst many other factors played and continue to play, a part in the recession.

Intel ensured, through their greed, that the entire world suffered a lot longer than needed.


It is no secret how much the world and it's economies depend on technology, it is one of the biggest driving forces, even in sectors which are not typically associated with it, they all rely on technology somewhere within their structure.

Intel milking all (you can say it makes good business sense, but I disagree mostly) caused the sector to become stagnant (Nvidia to an extent jumped on board too, but they were delivering in terms of quality and committed to development and genuine progress) This stagnation spread to all sectors and all economies, and yes there were many other big factors.

But ultimately Intels illegal activities, and I will say coupled with AMD failings, to a lesser extent, at the time, were huge contributors.
I'm sorry for formatting and grammar, just a rant really.

Everyone suffers when the CEOS behave as they have, lining their own pockets at the expense of everyone else. (not aimed at Bob Swan , clearly, but he still allows his company to operate in a trashy, immoral fashion)
Posted by Rejuvination - Thu 18 Jul 2019 21:09
All i can see is how they find excuses to slow the progress of technology so they have an excuse to sell longer without upgrading.
Posted by Usernamist - Fri 19 Jul 2019 08:32
Is there an antonym for “ambition”? If there isn't, “Intel” fits the bill nicely.
Posted by Cr@ig - Sun 21 Jul 2019 10:36
riding rough shot over their security flaws is not helping them either, you reap what you sow. I think it's fair to see that AMD more robust approach to this is paying off now, which at the time hurt them even more against intel.