Intel's SVP and GM of Accelerated Computing Systems and Graphics (AXG) Group, recently took part in an interview with ASCII.jp, a popular tech magazine in Japan. There wasn't a great depth to the interview as it seems rather short and touched upon a wide range of Intel graphics tech; Xe HPC, Ponte Vecchio, Xe Link, ray tracing for HPC, the Aurora supercomputer. However, there were some juicy nuggets about Xe HPG and Arc Alchemist, XeSS, the chosen TSMC process, and (as per our headline) Intel's plans with regard to consumer graphics card reference and custom designs.

In the interview, it is indicated that Intel is already making sure graphics card partners have access to its Arc Alchemist reference designs. However, there remain some important uncertainties at this stage. For example, it isn't clear whether Intel will be marketing its reference designs as 'founders edition' style products, or not. Additionally, it seems to be the case that Intel is giving partners freedom to differentiate in many ways, with varying amounts of GPU power targeting various sections of the market. Koduri indicated that AIB partners will create an appealing mix for their own and consumer interest.

A little more info on XeSS was divulged, with Koudri indicating that older graphics architectures like Tiger Lake iGPUs, and Iris Xe / DG1 can use XeSS. I think we already knew this, but the question we had was about XeSS performance on older/other manufacturer GPUs. 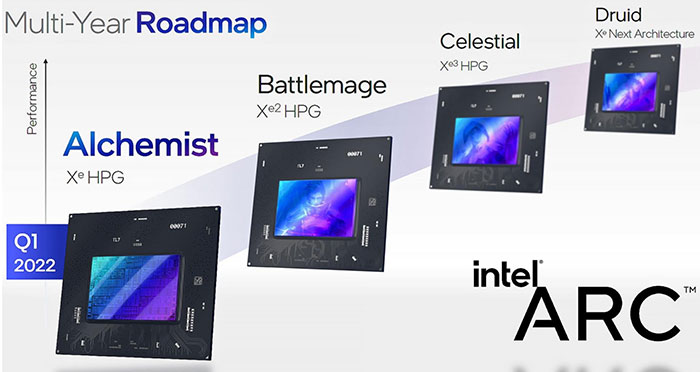 Some other short and sweet info morsels included the assertion that Xe-HPG won't support Xe-Link for multi GPU configurations. This more or less confirms that Intel won't be aiming an SLI/CrossFire solution at consumers. For those interested in process/supply, Koduri also spoke of the decision to choose TSMC N6 for Xe-HPG GPUs. With regard to this decision, it seems that 'Intel 7' isn't expected to have spare capacity with ADL parts needed in great quantities. It isn't known as yet whether Battlemage (Alchemist's successor) will be manufactured by Intel, but it was implied that it would stay with TSMC and possibly be an N5 or N4 product, says the Japanese source.

Also, it's quite telling about their Intel “7” node if supply is less constrained going with TSMC than their own node in either one of two ways:

1. Using a TSMC node will impact Nvidia and AMD, even though it shouldn't it still means there is less material going around. It could be an excellent ploy to constrain their competitors even further than they already are.
2. The Intel “7” node is heavily in use by their CPU and other designs meaning they couldn't ramp up fast enough for the GPU side of things. This was already likely a given because during Murthys departure they were already having to scrap plans for the 10nm node for their own GPUs.

I believe it's a combination of both of the above because I would never put aside Intel being malicious in their competitiveness while also trying to spin their short comings as a positive.
Posted by watercooled - Tue 21 Sep 2021 21:49
It's not necessarily just a case of capacity. A node being suitable and in fact heavily optimised for CPU production does not necessarily mean it is suitable for producing GPUs.

Intel's reasoning for going with TSMC's N6 for their first generation of GPUs will be based on a load of reasons, and it implies neither malice nor severe capacity problems with “7” ramping. Though it doesn't exclude them either, but regarding the first, there's a major counter-point to that.

TSMC are not stupid, they obviously see Intel as a short term customer who would prefer to make use of its own fabrication capacity where possible. They are not about to throw their long-term customers like AMD and Nvidia under the bus to help out essentially a competitor. These sort of capacity deals are planned long in advance and, while it could mean less theoretical capacity for others on the node, that is making the assumption that the capacity would have been purchased by them in the first place. TSMC has supposedly turned down exclusivity deals with Apple before today, in the name of remaining independent and open.

Regarding capacity, it could well be a factor, but it doesn't imply anything catastrophically wrong with the node either. Intel will be in early ramp for their 7 node and GPUs eat a LOT of capacity per die vs CPUs, hence AMD's recent prioritisation of CPUs, given the wafer allocation available to them. Early ramp typically implies lower volume and high defect density, so it is quite reasonable to produce the large GPUs at TSMC until they have their own capacity situation under control.
Posted by flearider - Wed 22 Sep 2021 17:04
just a thought maybe a try before xmas .. they just might be able to do it .. ?
Posted by nobodyspecial - Thu 23 Sep 2021 15:53
Sell direct please, one per house/visa, if only to slow down the miners.