Just ahead of the weekend, seasoned PC hardware benchmarks leaked Tum Apisak shared a tantalizing tweet which revealed some purported performance rankings of yet to be released DG2 graphics cards from Intel. Based upon the Xe-HPG graphics architecture, targeting PC gamers, two GPUs were highlighted by Apisak – one with 448 and another with 128 execution units (EUs).

Before going any further, it is important to point out that Apisak hasn't provided any indication of what benchmark(s) he is basing these scores on. Of the comparison graphics cards selected, HEXUS reviewed the Sapphire Radeon RX 6700 XT Nitro+ in March, multiple GeForce RTX 3070 / Ti graphics cards, and several GeForce GTX 1650 / Super cards.

The above are interesting results for a number of reasons. Firstly, this is the first mention of an Intel DG2 packing 448EUs. Previously we heard that the top end DG2 would be a full fat GPU with 512EUs. This part joins expected DG2 cards with 256 and with 128EUs. 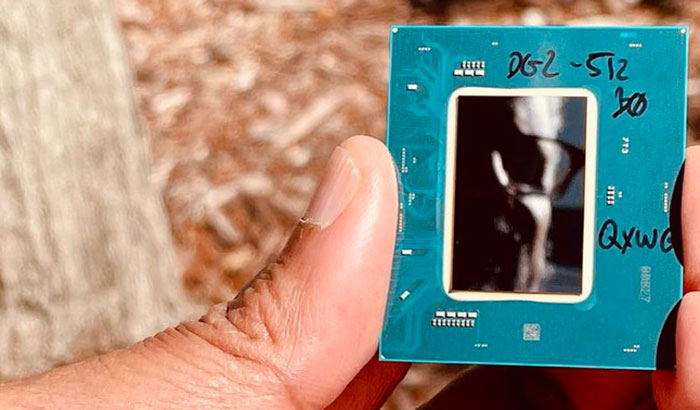 The Intel DG2 448EU @ 1.8GHz is seen to be about eight per cent behind AMD's RX 6700 XT, and only five per cent behind Nvidia's RTX 3070. It isn't at all certain what clocks would be possible with this graphics card, perhaps it could be overclocked to reach above its competitors, given adequate cooling – we simply have to experience of the DG2 to base expectations on though.

Meanwhile, at the other end of Intel's upcoming DG2 offerings the 128EU GPU offers a worthwhile upgrade on the GTX 1650, with 12 per cent improvement in the benchmark used. This looks like it will be therefore behind the GTX 1650 Super, which is 30 to 35 per cent faster than its suffix-less sibling.

These benchmarks might give PC enthusiasts and gamers hope for a boost to GPU supplies. However, there are lots of unknowns about DG2, let alone its games/app and drivers support. It is likely to be Q4 before any Intel DG2 graphics cards emerge, and traditionally the top-end parts arrive first, though the area of the greatest need that I see is in the affordable to mid-range – with the DIY market still waiting for the Nvidia GeForce RTX 3050/Ti and AMD Radeon RX 6600/6500 GPUs.

Posted by Kanoe - Mon 21 Jun 2021 14:24
I hope they put enough effort into drivers and optimisations as the GamersNexus review of the DG1 showed big issues with frame pacing that is going to need a lot of work to make the experience of gaming on Intel discrete GPUs not a horrible time
Posted by Tabbykatze - Mon 21 Jun 2021 15:02
Interesting, if this actually a first offering level of performance then this is going to be very aggressively biting the shins (not ankles) of AMD and Nvidia. Especially if this isn't the full fat die of which being 14% more EUs potentially being a linear performance increase would put it in the 6800 range of performance.

Then we have driver optimisations that once they have it in the wild and getting telemetry and feedback from developers and users could net them more gains meaning this is a disgustingly good offering from team Blue.
Posted by QuorTek - Mon 21 Jun 2021 15:22
Awesome… lets have a price and performance war with quality inbound as well.
Posted by Yoyoyo69 - Mon 21 Jun 2021 15:55
I'd imagine a huge amount of time, budget and effort, will go towards figuring out how Intel can LOOK like they're are close to on par. They definitely have form for very misleading and dishonest practices.

Personally, even IF they were better than Nvidia or AMD (which clearly isn't going to happen, but wanted to show my point of view), I'd avoid them. Intel are notorious for dropping support and expecting you to buy the newest line, before you finished unboxing.
Posted by Yoyoyo69 - Mon 21 Jun 2021 15:56
Exactly, even if they're better, never mind on par, I'll avoid them personally.

They NEED to be much cheaper, to become established.