AMD will launch its FidelityFX Super Resolution technology on Tuesday, 22nd June. After months in incubation, it will be fascinating to see this open platform technology in action, especially as some have framed it as a direct competitor to Nvidia's proprietary RTX-only DLSS. Of course, the proof of the pudding is in the eating, and reviewers and gamers will be able to see how fantastic / dire FSR is in a variety of games later this month. Fingers crossed.

One of the appealing aspects of FSR is that it is going to be enabled on quite a width and depth of graphic hardware. AMD has clarified that cards as old as the Radeon RX 470/480 will support the tech, Nvidia Pascal cards can join in the fun too, and Intel's Raja Koduri said he was "definitely looking," at making upcoming Xe-HPG GPUs FSR friendly. 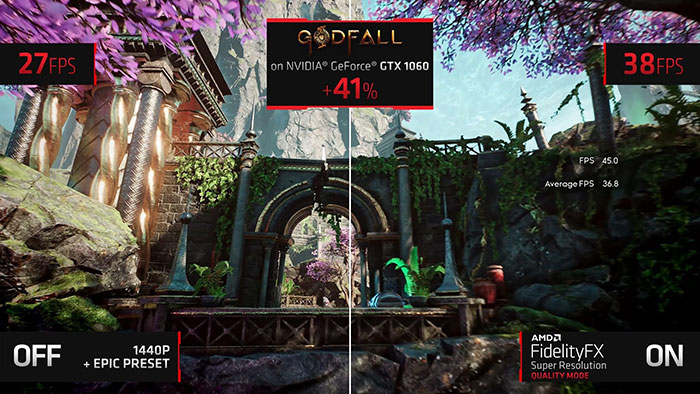 This weekend, Microsoft has confirmed that the Xbox Series X/S will support FSR. "At Xbox, we’re excited by the potential of AMD’s FidelityFX Super Resolution technology as another great method for developers to increase frame rates and resolution," a Microsoft spokesperson told IGN gaming news. "We will have more to share on this soon".

Microsoft has been reasonably quick to integrate other AMD FidelityFX tools into the development kits for Xbox Series X/S, so it isn't such a big surprise for it to signal it will adopt FSR even ahead of its release. Sony is tipped to hop on board too, sometime in the future. Widespread support on consoles bodes well for FidelityFX and FSR in particular.

We hope that AI-less FSR puts up a worthy fight against DLSS for the sake of competition and helping folk with older/slower hardware enjoy more fluid gameplay. Judgement can't come until later this month when we see (hopefully) lots of titles with support for FSR and can assess the effectiveness and quality based on comparative evidence.

unless prices on current 3080ti cards get on level or lower in price than what the 1080ti was, then I see no reason to buy their product, and probably get an AMD instead.

QuorTek
Also I forgot to add, since it is now on consoles, that means that all games pretty much will support it, or start to support it = a big win to AMD for this round.

Certainly expect the ‘Triple-A’ titles to start offering FSR support in the near future. I read somewhere that AMD's approach was less reliant upon AI, therefore less ‘training’ of neural nets is involved.

Here's hoping the developer input is such that smaller indie-developers are able to make great use of this technique as well.