Earlier the HEXUS editor touched upon the topic of AMD launching FidelityFX Super Resolution (FSR) in the first games, starting from 22nd June, in his write-up of the RDNA 2 Mobile Radeon GPU news from Computex. Now AMD has published a dedicated 4K video highlighting this portion of the AMD Computex presentation by Scott Herkelman, CVP & GM of AMD Radeon. The video, embedded below, brings forth some important points which include; FSR is a cross-platform solution and will work on older PCs and consoles (including those that use Nvidia GPUs), users get four FSR presets for quick adjustments, and that the tech is built upon a spatial upscaling algorithm that works great with ray tracing

From about 1min 25s into the video above, you can see Godfall running at max settings on a system with an AMD Radeon RX 6800 XT GPU. Moreover, the game is running at 4K with ray tracing turned on. Without FSR the in game performance hovers at around the 50fps mark. Herkelman comments that turning on FSR in its 'Ultra Quality Mode' setting provides a "visual experience that is practically identical". But, thanks to FSR, the game is now running nearly 60 per cent faster with frame rates just under 80fps on average. 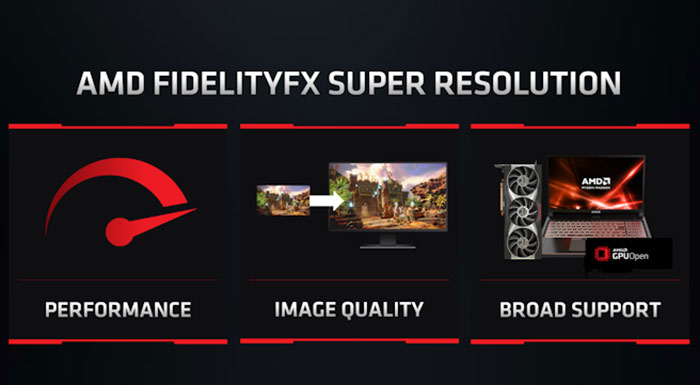 I mentioned in the intro that there are four FSR presets to help users find a happy balance between performance and image quality on their systems. As well as Ultra Quality, there are Quality, Balanced, and Performance modes to choose from. You can see gamers can get up to 3X fps increase in performance mode… 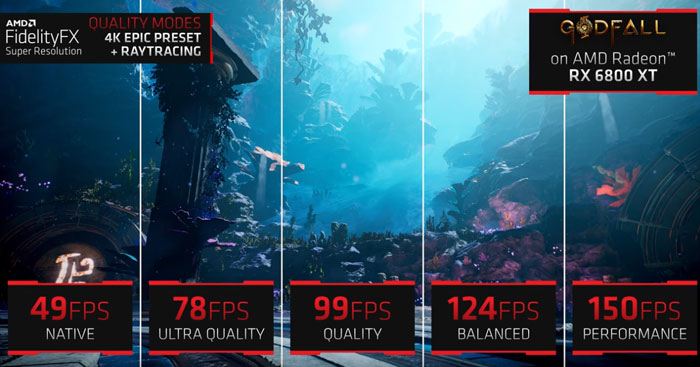 The FidelityFX suite of technologies is available on GPUopen.com "for the entire industry to freely access," boasted Herkelman, at one point in the presentation. This could be great, especially for owners of older hardware, with the hope that a broad range of games will be updated with FSR enabling patches. If you have a PC with an older AMD GPU, or even an Nvidia GPU, then perhaps FSR will be a lifeline for you as you await decent modern GPU pricing / availability. 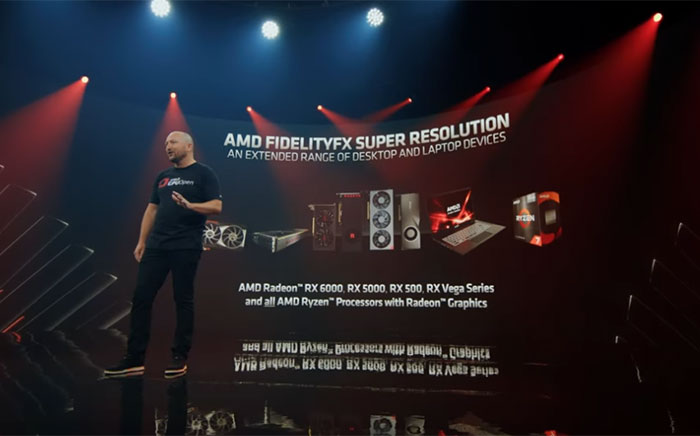 AMD says that FSR enabled games will support the technology on graphics cards as old as the RX 500 and RX Vega series, as well as Ryzen APUs with Radeon graphics. In another surprise, Nvidia GPU users can make use of the tech too. I'm not sure how far back in Nvidia GPU history that FSR is going to be supported but Herkelman demoed Godfall running at 1440p and max settings on an Nvidia GeForce GTX 1060 (the most popular Steam gaming GPU) at 27fps. Turning on FSR 'Quality Mode' provided a 41 per cent frame rate boost – that is an average of 38fps. 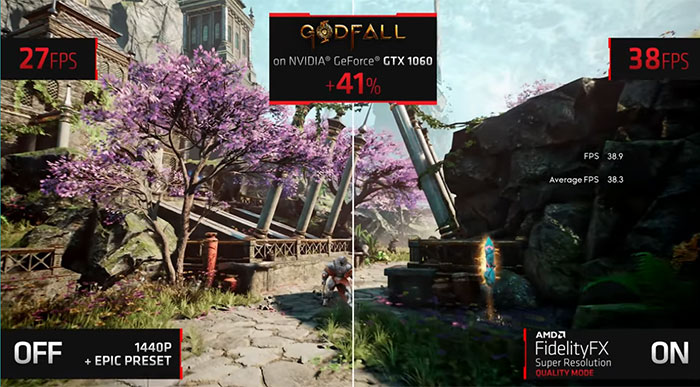 Herkelman appealed to the developer community. He highlighted the simple maths that less proprietary code for games developers will help them minimize workload for a wider impact (100+ AMD GPUs and APUs plus PC Nvidia GPUs). FSR already has support from 10 games studios and engines.

Wrapping up, Herkelman reminded us the first games with FSR support will be announced on 22nd June. Additionally, he shared a URL where you can request FSR patches for your games library favourites: http://www.AMD.com/FSR.

Hoping this plays out similarly to GSync vs FreeSync - as consumers definitely benefitted from AMD bringing competition to NVidia (I benefitted and haven't owned an Radeon GPU for ~20 years).
Posted by KultiVator - Tue 01 Jun 2021 09:51

Sort of to be expected… it's a compromise by design, although I can't say I see any trailing/blurring on my system with DLSS enabled.

Whilst there is a difference between native 4k and DLSS-generated 4k - it's not much of a compromise at all to get really fast fluid frame-rates that most GPUs would struggle with.

The benefits of DLSS and hopefully FSR (for me) is preferable to switching the resolution down a notch or two.
Posted by Corky34 - Tue 01 Jun 2021 10:10
Bit disappointing that it's dependant on AMD and the game designer supporting it and not something that's more universal, something like this requires a certain level of commitment that there's no guarantee of having in the years to come.