Just ahead of the weekend Intel's chief architect Raja Koduri took to Twitter to share some of his career nostalgia, but if you read between the lines there are some quite tasty morsels of info about the upcoming Intel Xe-HPG hinted at here. 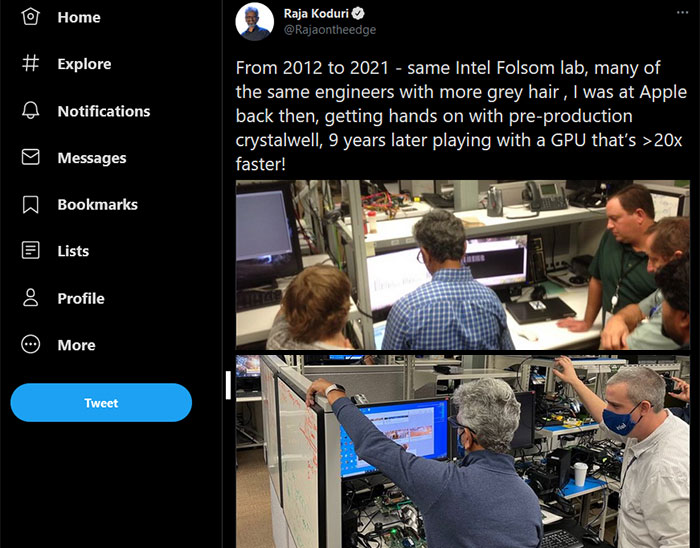 Above you can see the images comparing Koduri's visit to Intel's Folsom Lab (as an Apple employee back then) and a few days ago as "playing with a GPU that’s >20x faster" than the Intel Crystal Well iGPU for Haswell. The vintage iGPU was known as Iris Pro 5200, and was equipped in the top-end Intel Core i7-4770R processor.

So, have we got a comparison reference statement from Intel's chief architect giving us a hint at the Xe-HPG performance? Koduri is currently testing Xe-HPG GPUs in 3DMark, as we have seen in his previous Tweets and in the contemporary lab photo you can see the 3DMark app on the screen. 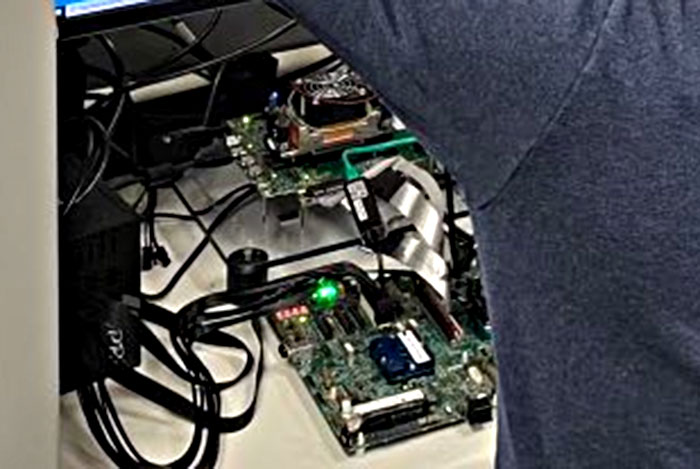 In tests the Intel Iris Pro 5200 graphics score averages 1,432 points in the 3DMark Fire Strike. If we multiply this score by 20 to give a baseline expectation of the Xe-HPG GPU under test we get a score of about 29,000 points, and it could easily be shooting at 30,000+. Such a score is very close to the 29,316 average for the Nvidia GeForce RTX 3060 Ti as collected by the 3DMark online database. For another reference point, AMD's Radeon RX 5700 XT has an average graphics score of 27,408 in the same test.

The above calculations and comparisons are a big leap from the seemingly casual photos and statement shared by Koduri on Friday, so of course must be taken with a pinch of salt. However, the Xe-HPG cards will be targeting contemporary PC gaming with all DirectX 12 features including ray tracing turned on so will need to be aiming for the RTX 3060 Ti level of performance at the lowest.

If Intel can get the level of performance we are seeing hinted at, ample supplies out, and its pricing right, we could be looking at a much more interesting three horse GPU race in H2 this year.

Posted by [GSV]Trig - Mon 15 Mar 2021 10:42
No doubt that 20x faster is in very specific tests, until it's actually out in the wild then any figures can be taken with an appropriate amount of salt..
Posted by Steve - Mon 15 Mar 2021 10:48
Moore's Law: A roughly doubling of transistor count every 2 years, and an approximate equivalent performance increase assuming programming models allow.

'[GSV
Trig;4287585']Was there not some testing done that proves that the nm isn't really comparable between Intel and AMD etc due to how things vary..?

Yes and no. The Intel fanboys overstate it. There are some measurements that show similarities of Intel 10nm and amd 7nm in terms of transistor size, but the gate density is different etc. It gets distorted into Intel isn't that far behind when you use a microscope, well sorry but that's only looking at part of the picture. The performance stats speak for themselves.