Acer is preparing a Nitro 5 laptop based upon AMD Cezanne platform that sports a choice of Nvidia discrete GPU. Among the GPU choices are the 'GN20-P0' and 'GN20-P1', which according to the latest information, including some covered by momomo_us's recent tweets, means that it will come packing your choice of the mobile GeForce RTX 3050/Ti. The Acer document shows that both these unannounced GPUs have TGPs of 60W.

The Asus leak is a bit bigger and specifically mentions the Nvidia GeForce RTX 3050 Ti as an option for the Asus TUF Dash 15 which is built on the Intel 11th Generation Tiger Lake H-series processor platform. This info was available on the official product information page but has disappeared, I get redirected, at the time of writing. 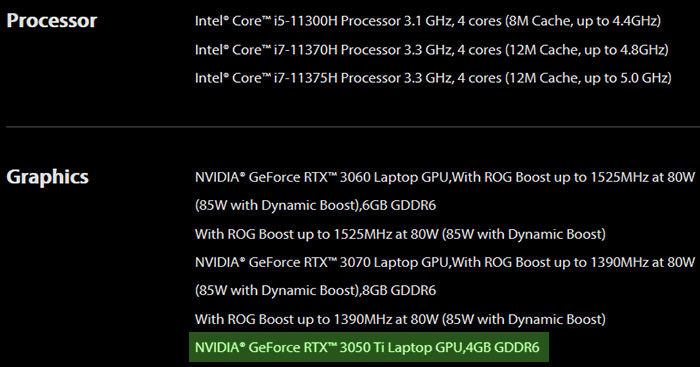 Momomo_us has also found and shared a Chinese language video which showcases a different AMD-Cezanne-based Asus TUF 15 FA506Q machine (with a smattering of disassembly, a look at cooling, and a few benchmarks). At the end of this video the reviewer has inserted a slide which I've reproduced below. 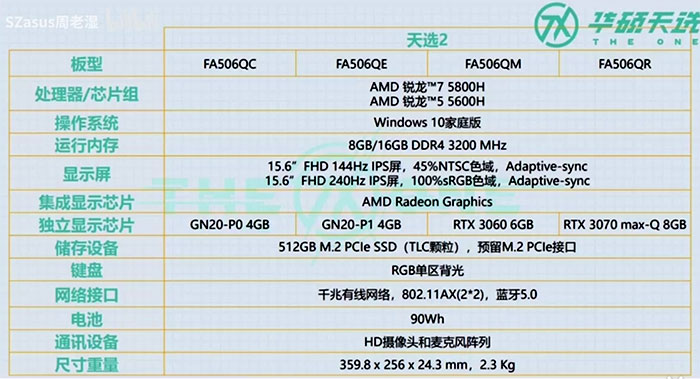 The appearance of the GeForce RTX 3050/Ti mobile GPUs perhaps bring up more questions than answers. First of all, is Nvidia going RTX for the whole of the Ampere family? Secondly, will we see desktop add-in cards with these names and how different will they be? And lastly, is 4GB VRAM enough for a gaming laptop in 2021?

Posted by Frogrocker - Mon 08 Mar 2021 12:24
4gb in what will be likely be 1080p screens definitely doesn't feel like a value add. Could start to be hamstrung by it on some games so would only feel worthwhile in a well priced laptop. If the 3050 laptop variant is 4gb too and significantly cheaper that seems like it could be a much better purchase.
Posted by bae85 - Mon 08 Mar 2021 16:34
Basically the next generation of Asus TUF laptops. My Ryzen 4800H Geforce 2060 based Asus TUF is the best computer I've ever owned.