AMD and partners might be just a few weeks away from launching and releasing a new mid-range contender, aimed at 1440p PC gaming and packing 12GB of video memory. We got the first hint that the Radeon RX 6700 XT was in its advanced stages of development back in December when a BIOS file came to light. We think it was surreptitiously teased at the recent AMD CES 2021 keynote, and more recently the HardwareLuxx editor shared the standard SKU packaging logo.

Yesterday, Gigabyte was spotted registering eight new graphics cards with the EEC. Going by Gigabyte's naming conventions it looks like it is preparing at least eight models for release in that economic region, and it will probably be the same range as we get access to in Western Europe. Needless to say we are hoping AMD and partners have bountiful supplies of this GPU.

Twitter's @Komachi spotted this EEC listing. You can see the entry date was yesterday and that Gigabyte has registered eight SKUs as follows:

Picking through the model codenames, you can see that it is readying Radeon RX 6700 XT graphics cards in the following flavours: Aorus, Gaming, Eagle and reference design. You will also note that there are standard and overclocked versions and every model comes packing 12GB of VRAM as standard. 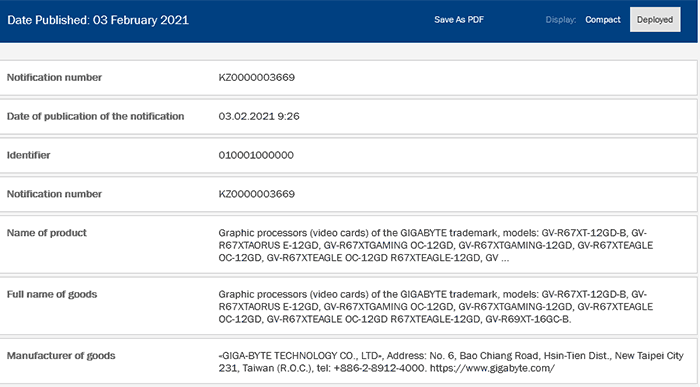 With no sign of the RX 6700 model in the EEC filings it looks like we will have to wait even longer for this more affordable variant. Moreover, we don't have any leaked indications about what spec-snips will be made to realise the RX 6700 non-XT model. Last time around AMD reduced the base/boost clocks and cut 4 CUs to create the little brother of the RX 5700 XT, so this might give some indication of the specs the RX 6700 will have.

As for availability, it will come when the market mature more and more and more items is in circulation, thing is, AMD can cut or keep their prices, and still earn bunches on it and let alone they got a huge foot in, on most of the entire market, Nvidia only got a niche in comparison.
Posted by iEimis - Thu 04 Feb 2021 18:41
Would be great if you could actually get one at that price, unfortunately, we live in 2021 which is starting to feel more like 1980s Soviet Russia where you had to wait in line for oranges.
Posted by Sumanji - Thu 04 Feb 2021 19:30
Hmm, need some advice guys…

I'd suggest you wait until stock stabilizes and choose then.
Depends on what you also use the GPU's.
For gaming, either AMD or NV will be fine… RTX is not a big deal for me in games as the differences are fairly minor and not something one notices during gameplay.

Other than that, if you do content creation… it will depend on which software you use.
Most rendering software (unfortunately) use NV Optix/CUDA and therefore won't work on AMD gpu's… but you're not totally at a loss there because AMD DOES have AMD Radeon Pro renderer though for most rendering software.

AMD did decide to stop supporting OpenCL mostly and focus on D3D12 and Vulkan instead… but adoption of these might take devs time to implement - but I do content creation and I manage with an AMD gpu (vega 56) just fine.