Intel graphics boss Raja Koduri has taken to Twitter to tease some upcoming Xe GPU products. A few hours ago he shared an image which shows "Intel's first data centre GPU that's in production, between Xe HP GPUs that are sampling to customers." 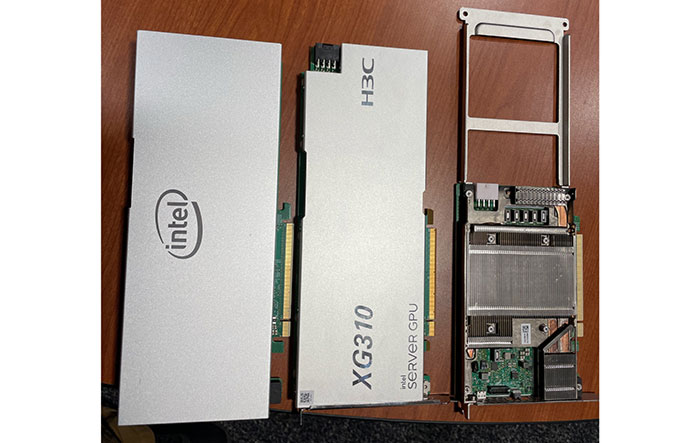 In the picture above you can see the recently released Intel Server GPU, the XG310, centre, which is based on Xe-LP microarchitecture. The energy efficient server card is designed for "high-density, low-latency solution at lower total cost of ownership (TCO) for Android cloud gaming and high-density media transcode and encode for real-time over-the-top video streaming," and similar tasks.

Koduri's Tweeted tease shows the first pictures of two products based upon the Xe HP GPU, flanking the XG310. All  three cards laid out on the table are single slot passively cooled, and they are all provided in the discrete PCIe form factor. Looking at the model on the right, where you can see the PCB exposed, you will note a single 8-pin power connector is present. 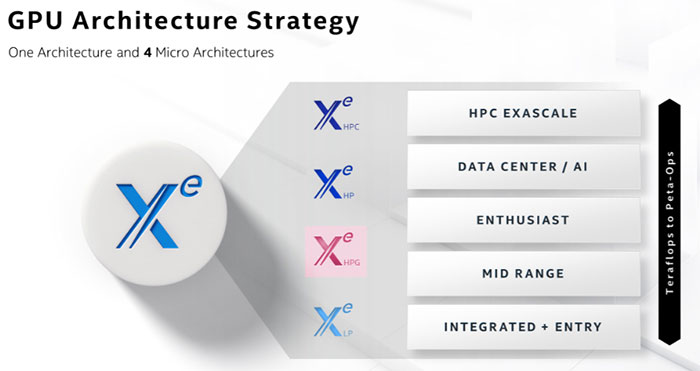 An overview of the GPU strategy from Intel shows there are several more GPUs still to ship
so that Intel can boast a full range of Xe solutions.

In a follow up Tweet Koduri praised the graphics industry as a whole, which he said had "moved the GPU bar significantly forward." The Intel graphics boss heralded Intel and rival company products, as follows; A100, Xe LP, RTX 3X, Navi2, MI100, M1. Koduri signed off by saying how excited he was at the prospect of the release of Xe HP/HPG/HPC GPUs in 2021 and concluded that we are entering a "GPU Golden Age".

HEXUS readers will be particularly interested to see Xe HPG products materialise, as they form the most recently introduced part of the Xe range and will be targeting the enthusiast/mid range market with discrete cards packing GDDR6 for a good price/perfromance balance. Xe HPG was first outlined by Intel in August and these GPUs will be optimised for gaming with ray tracing.

loftie
By entering a GPU Golden Age I'll assume he means GPUs will cost their weight in gold.