AMD has officially taken the wraps off its high-end Radeon RX 6000 video card design. The Radeon RX Twitter account shared the image embedded directly below, a few hours ago. But this isn't all, The Twitter post detailed how Fortnite players can "study every angle" of the design via Fortnite Creative Island (hub code 8651-9841-1639). Since the announcement several users have posted screenshots showing the new RX 6000 design, as well as sharing videos of various Fortnite Creative Mode flyovers. 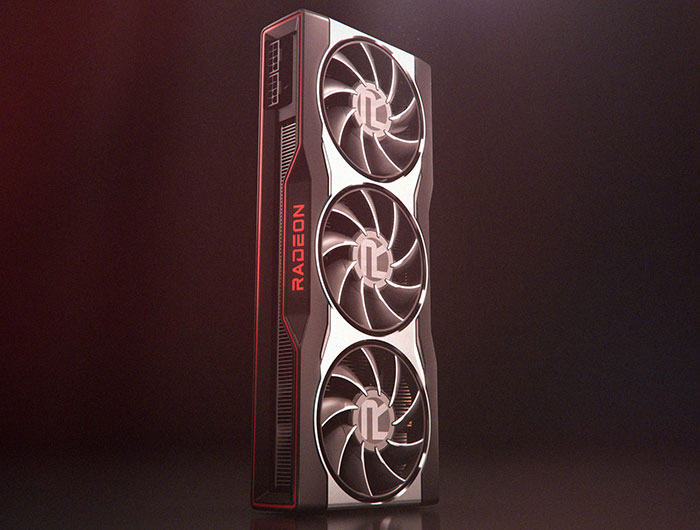 The Tweeted photo is a bit hazy and muted. Those that dive into the Fortnite reveal will see the render of the RX 6000 is more contrasty thanks to its black and chrome finish. If you don't play Fortnite but want to see more angles, it is worth a look at the video shared by Moor Insights & Strategy analyst Anshel Sag. For all the key angles in stills, check out Nate Orb's Tweet.

Below you can see a couple of detail stills from a Fortnite run, including one of the backplate with the outputs on this reference design. It appears to be the case that this card features (left to right in the photo) one HDMI port, two DisplayPort outputs and a USB Type-C port. The USB Type-C port was confirmed by CVP & GM AMD Radeon, Scott Herkelman. With the twin 8-pin power connectors present it looks like this Big Navi will run comfortably with 375W or less.

Interesting to see they are keeping USB-C for virtual link. I thought they announced last week the standard was being dropped due to lack of uptake?
Posted by Kanoe - Tue 15 Sep 2020 10:41
Im not sure it is actually virtual link, i think it is just a usb-c for video without the other stuff like power delivery that virtual link also included and nvidia blamed for increasing the power requirement on the 20xx series.
Posted by Xlucine - Tue 15 Sep 2020 10:43

ik9000
Looks like cheap CGI to me. Who wants a cartoon in their machine? FFS AMD…. (kidding)

Interesting to see they are keeping USB-C for virtual link. I thought they announced last week the standard was being dropped due to lack of uptake?

Nvidia dropped the USB port on their GPUs, but AMD hasn't had one before