AMD has relaunched its GPUOpen initiative with a refreshed website for developers - plus four new GPUOpen tools. About four years ago the GPUOpen initiative was kick-started. Since that time a lot has changed in the graphics world, not just hardware-wise, big developments have been implemented in software and with APIs like DirectX 12 and Vulkan, which are now widely supported. GPUOpen has provided ISA and programming guides for a variety of Radeon GPU architectures released over the last four years, the Radeon GPU Profiler, Radeon GPU Analyzer, as well as over 50 tutorials to foster innovation and improve graphics performance. 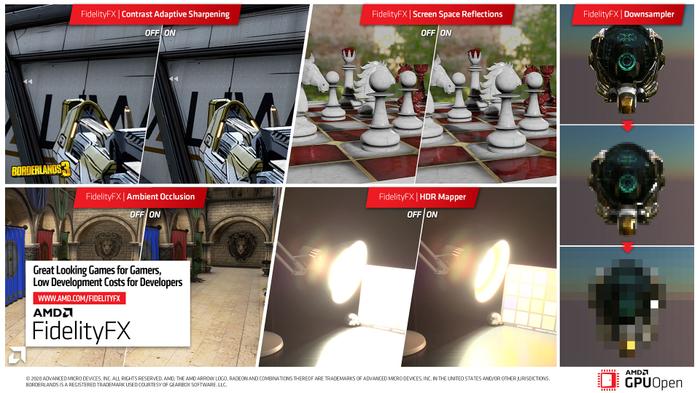 Click the image above for a visual guide to the difference each tool can make to a scene.

In addition to those four new tools, GPUOpen has announced that its next-level physics tool, FEMFX, is available as source code and as a plug-in for Unreal Engine. It says that FEMFX enables developers to add a whole new level of physics realism to their games. It works well alongside another open-sourced tool, TressFX, for GPU-accelerated realistic hair and fur rendering and simulation - which reached v4.1 in January.

GPUOpen has made available a couple of demos for developers and gamers to check how FEMFX can make a difference. Grab them via the AMD blog links about 3/4 of the way down the post.

Lastly, GPUOpen has just committed to keeping its Twitter channel up to date with news of regular updates and developer topics.

QuorTek
Ray tracing is not an Nvidia only thing its existed for years it is the way it is used…. the nice thing is that AMD's is more open source I think… uh it would not restrict people the same way as Team Green do

isn't it more a case that this is software-based, while Nvidia (and AMD's upcoming RDNA 2 architecture) is hardware-based?
Posted by kalniel - Wed 13 May 2020 08:03
Screen space reflections (SSR) is not full ray-tracing at all.

It's how reflections have been done cheaply in the rasterised world for some time, and it allows you to place images of the scene as if they were reflections. It can't do anything about off-screen objects.

It does look very convincing if done well but if you compare side-by-side to ray-traced reflections you'll spot the errors/missing objects in SSR immediately.