Intel updates its Windows 10 DCH graphics drivers quite regularly with bug fixes, optimisations, and so on - as you would expect from GPU selling rivals like Nvidia and AMD. However, some PC system users, particularly users of laptops, might have found that they have had to wait for specific computer manufacturer (OEM) customised drivers to arrive to get updated. Now Intel has decided to unlock its Windows 10 DCH graphics drivers so anyone can apply the latest driver set from its downloads site. 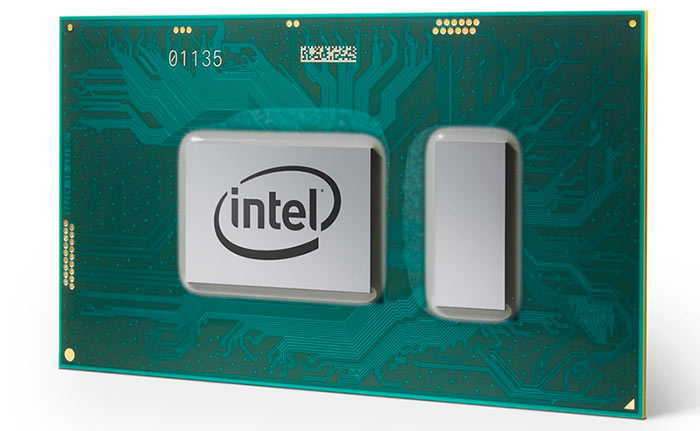 OEM customised drivers "are hand-picked, customized, and validated to resolve platform-specific issues, enable features and enhancements, and improve system stability," notes Intel in its latest DCH drivers release notes. Unfortunately, some systems makers are slow to keep up with updates or might not even intend to provide them, especially for older models. Thus Intel graphics users have been pestering Intel to provide "the freedom to upgrade their systems to our regularly released generic graphics drivers and enable our latest game enhancements, feature updates, and fixes".

As of this latest release Version: 26.20.100.8141, dated 27 April 2020, Intel Windows 10 DCH graphics drivers are unlocked. Intel says the drivers work for systems based upon the 6th Generation Intel Processor platform or higher. If you are concerned about the OEM customisations, it says that shouldn't be a major concern as Intel will keep the customisations intact during the upgrade, in accordance with Microsoft DCH driver design principles. This makes a new way for OEMs to provide updates to their customers: delivering the customisations file separately, updated as necessary, via Microsoft Windows Update.

There is a small word of warning though. Intel says that the generic driver is mainly intended to "temporarily test new features, game enhancements, or check if an issue is resolved," before they are passed to OEMs for validating and so on. 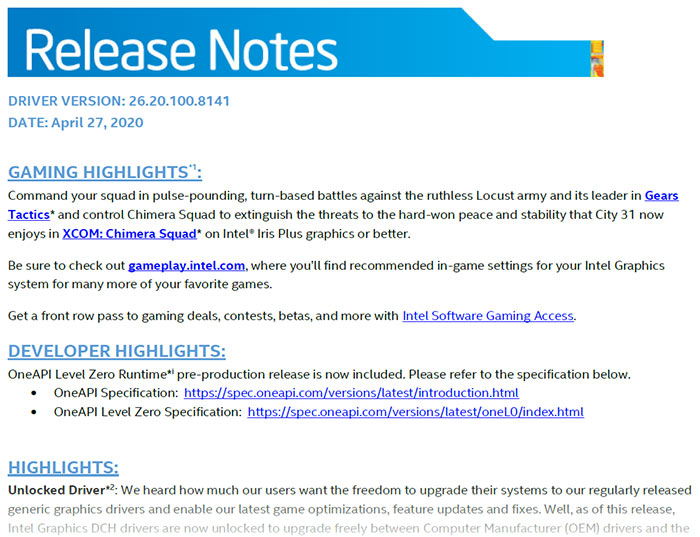 Incidentally, the Intel Windows 10 DCH graphics drivers Version: 26.20.100.8141 (approx 350MB) include optimisations to make both Gears Tactics and XCOM: Chimera Squad verified playable on Intel Iris Plus graphics or better. Developers might be interested in the OneAPI Level Zero Runtime pre-production release now included. A number of issues are fixed too, as you can read about in the associated PDF download.

Last but not least Intel is also unlocking the Intel drivers and the Support Assistant from today.

DevDrake
why so late? Ehhh. A positive change, thanks AMD

My thoughts exactly. I had a Lenovo machine at work recently. Could never upgrade the intel graphics driver. Use to have all sorts of graphical issues. It got so bad I asked for a new machine even though it was only 2 years old. Where as my 5 year old AMD laptop has always taken AMDs latest drivers (well until AMD dropped support for the older tech GPU in my A8-5500 APU but that's another story).
Posted by ValkyrieTsukiko - Tue 28 Apr 2020 16:59
Yay, i can finally update my surface pro 4's drivers without doing some hacky stuff to get it to work :-D
Posted by DevDrake - Wed 29 Apr 2020 14:24

ValkyrieTsukiko
Yay, i can finally update my surface pro 4's drivers without doing some hacky stuff to get it to work :-D

Can you link the haky way of updating Surface drivers ? I got Surface Pro 3, that is not affected by this change.
Posted by ValkyrieTsukiko - Tue 05 May 2020 12:30
I followed instructions like on this site https://dancharblog.wordpress.com/2018/12/09/installing-intel-uwd-gpu-drivers-on-surface-and-other-oem-laptops/

but it says it doesn't apply to Surface Pro 3, but most likely it's applicable to 6th gen+ Skylake+ processors (which is on pro 4 and later), best find out what processor is in the pro3 and find the last supported Intel graphics drivers for it and following the same instructions above but using this install package you found.