The recent CES 2020 hosted presentations by Intel didn't give us a lot to chew over with regard to the upcoming Intel Xe-based GPUs and the DG1 discrete graphics cards. There were some interesting titbits but the more technically inclined might have been left wanting by the brief live demo of DG1 running Destiny 2, and the miniscule slide deck promoting DG1 features shared later in the week. 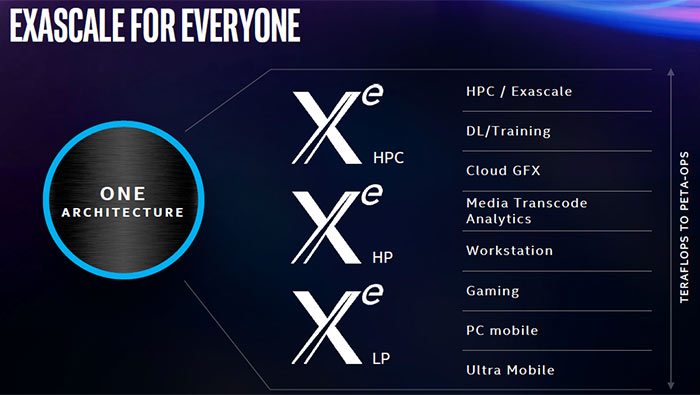 If you are champing at the bit for more Intel DG2 info but were left disappointed by the morsels on offer at CES, there is some good news. You won't have to wait until Computex Taipei (June) for a much deeper dive as Intel has scheduled a presentation at the upcoming GDC in San Francisco 16th - 20th March - that's just two months away. 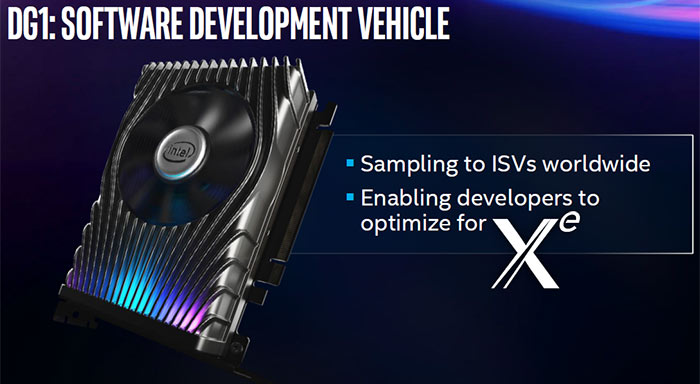 In a talk targeting "game and engine developers with an interest in graphics architecture and performance, as well as future looking graphics algorithms," Intel will deliver an introduction to the Xe architecture. Furthermore, it will outline "new and innovative features, unique insight on 3D and compute, and clear guidance on Xe Architecture optimisations".

A key part of the discussion will revolve around Intel's "significant compute, geometry and throughput improvements," over the current and widely used Gen11 and Gen9 iGPUs. Fans of deep details will be happy to hear that the presentation will "provide a detailed tour of the hardware architecture behind Intel's upcoming GPUs - unveiling the structure behind its building blocks and their performance implications". As a developer conference the GDC talk will also look in depth at the new features delivered by Intel Xe. 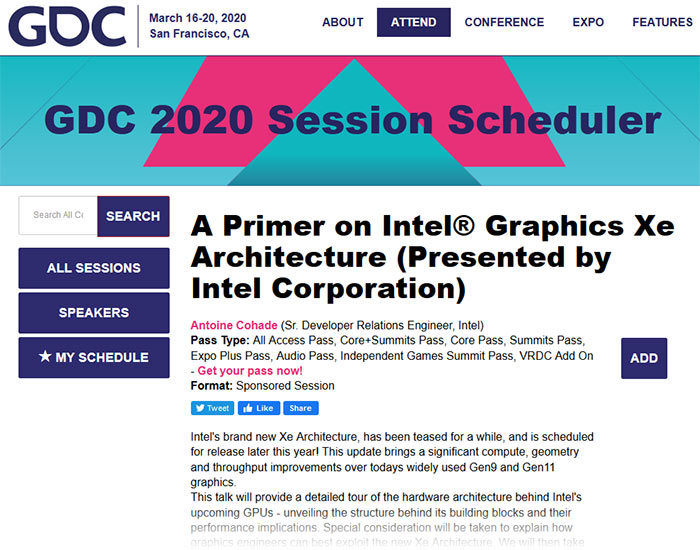 Antoine Cohade, Senior Developer Relations Engineer at Intel, is named as the host at the GDC 2020 event and has Tweeted asking for suggestions for any specific questions you want answered. You can add your voice to the few replies Cohade has received so far here.

Posted by mers - Fri 17 Jan 2020 16:17
Bit early to make any judgement on this what with it's not completed yet. When , who knows , bugs , drivers to sort out but what I've read on reports across the net it doesn't look that promising. I'm not inclined towards Intel but wish them luck with it , some extra competition against Nvidea and AMD in the GPU market has to be welcome , GPU prices are ridiculous. You can buy a decent chip and M/B for the price of a middling GPU card , doesn't make sense to me at all.
Posted by PC-LAD - Fri 17 Jan 2020 16:20

mers
You can buy a decent chip and M/B for the price of a middling GPU card , doesn't make sense to me at all.

That's because the average person buys a pc for word processing, solitaire and some you-tube maybe. The average consumer wouldn't even know what a graphics card is.
Posted by philehidiot - Fri 17 Jan 2020 23:06
The price of the high end is high for several reasons, only one of which is the lack of decent competition at the high end. Highhighhighhigh. Wheee.

mers
You can buy a decent chip and M/B for the price of a middling GPU card , doesn't make sense to me at all.

That's because the average person buys a pc for word processing, solitaire and some you-tube maybe. The average consumer wouldn't even know what a graphics card is.

No it's because mid range the best you've got is a 5700 XT with poor driver issues while still costing at least £350, just needs some competition.