Nvidia has announced that "PhysX 5.0 is just around the corner." To get developers ready, it will be making the SDK available shortly and outlined some of the attractive new features of the GPU accelerated physics library. One of the major introductions in PhysX 5.0 will be its support for a unified constrained particle simulation framework.

Three key features are delivered in Nvidia PhysX 5.0 and Nvidia summarises them in the bullet points below: 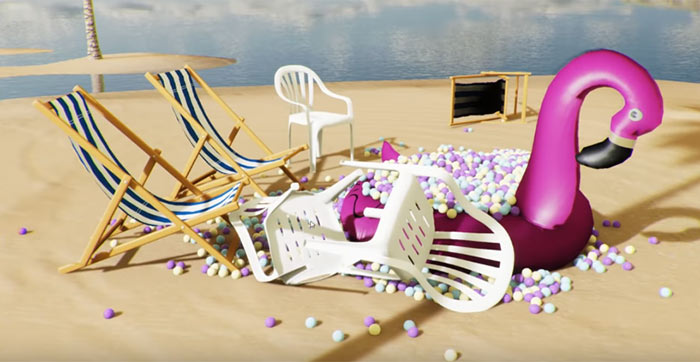 Nvidia has faced criticism for its PhysX GPU physics acceleration libraries over the years for its proprietary hardware support. I remember trying various hacks to see what the original Borderlands game ran like with PhysX enabled, while using an AMD GPU. Fast forward to 2019 and with the new Borderlands GOTY Enhanced remaster all the physics particle and cloth waving effects were enhanced and available with better textures on GPUs from any vendor.

AMD is now seeking to open up physicals acceleration with the FEMFX library for deformable physics effects. FEMFX is a multithreaded CPU library using the Finite Element Method (FEM) which supports a wide range of materials and interactions between materials. It is thought that AMD favoured CPU acceleration for physics as its Ryzen processors are pushing forward with many cores/threads going mainstream.

FEMFX makes it easy to deliver realistic looking wood, metal, plastic, glass with deformation effects such as breaking, bending, denting and melting. The FEMFX library and sample code are available now, and there is an Unreal Engine plugin available too. A video showing the various effects available in action was shared this summer at the Unreal Fest 2019 and is embedded below.

Posted by scaryjim - Fri 20 Dec 2019 11:18
If I was the only CPU vendor offering up to 32 threads on a mainstream platform I'd be pushing for highly-threaded CPU physics too… ;)

And of course their highly-efficient SMT implementation gives them an advantage in threads right down the product stack. Plus vendor agnostic. And open. As usual.

Me too, all the way back to them stealing the lead with Athlon 64 and going multi-core in a bigger way than Intel all those years ago.

Whilst I have been back to Intel in more recent times, my next build is definitely going to be a 3rd gen Ryzen.
Posted by LSG501 - Fri 20 Dec 2019 11:48
Got to be honest… I kind of prefer the approach AMD are taking, it's ‘non proprietary’ unlike physx, so you could technically use it with intel as well as amd cpu's, it will also work with previous gen hardware and newer stuff that isn't out yet.
Posted by GinoLatino - Fri 20 Dec 2019 11:59
AMD demo is way more interesting.
nVidia demo probably rushed because AMD released theirs…
Posted by chj - Fri 20 Dec 2019 12:04

LSG501
Got to be honest… I kind of prefer the approach AMD are taking, it's ‘non proprietary’ unlike physx, so you could technically use it with intel as well as amd cpu's, it will also work with previous gen hardware and newer stuff that isn't out yet.

I think Nvidia's Physx for CPU workloads was made open source around 4 years ago, unlike their gpu accelerated stuff.