Intel has taken the wraps off its new Ponte Vecchio GPUs at an event kicking-off the Supercomputing 2019 (#SC19) conference in Denver, Colorado. Ponte Vecchio is a general purpose GPU built on the Intel Xe architecture and will first be utilised for HPC and AI workloads. The 7nm GPU design leverages Intel Foveros 3D and EMIB packaging augmented with tech such as high-bandwidth memory, Compute Express Link interconnect and more.

Intel's Raja Koduri took to the stage to introduce Ponte Vecchio. During his keynote speech Koduri explained that Intel has a single Xe GPU architecture now ready but it will deliver multiple sub-architectures for various market segments. This initial unveiling covers the HPC/Exascale, DL/Training segments as you can see referred to as Xe HPC and Xe HP in the diagram below. 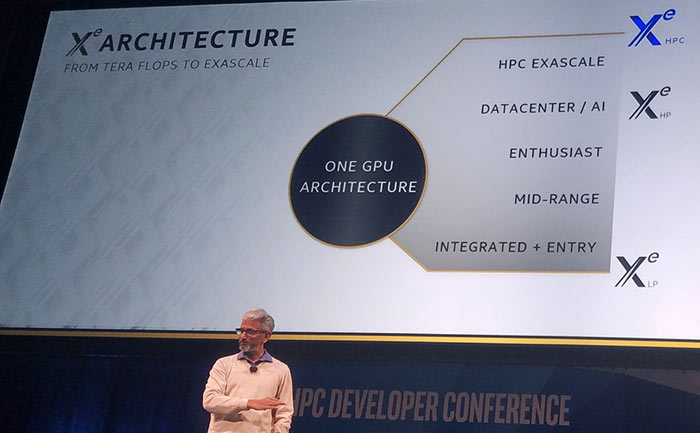 Ponte Vecchio is the Xe GPU aimed at these top two segments (HPC/AI acceleration) and as an 'exascale GPU' it will include things that may not appear in lower echelon designs such as; a flexible data-parallel vector matrix engine, high double precision floating point throughput, and ultra high cache and memory bandwidth. 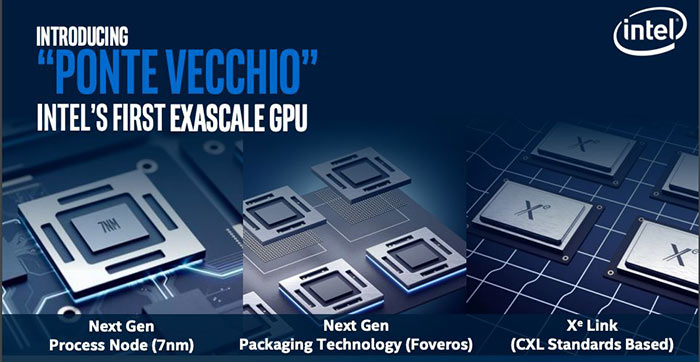 While all the above is interesting for a teaser, and sounds full of potential, there are still a lot of questions about the Xe GPU that were barely touched upon. You will note a lack of spec sheets with this news release, so we won't be comparing Ponte Vecchio with rival Nvidia and AMD GPUs aimed at HPC/AI acceleration today. 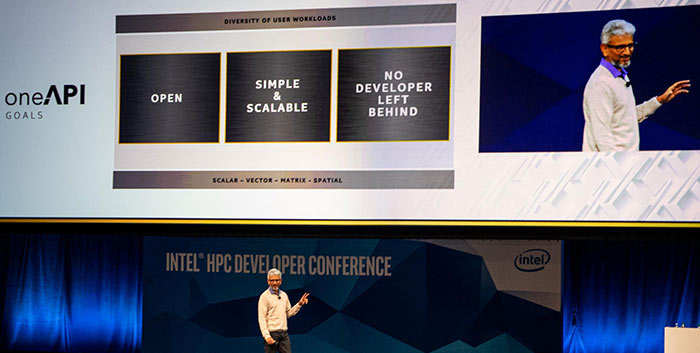 Intel spent quite some time in its keynote talking about the oneAPI software stack. It sums this up as a "developer-centric approach to heterogeneous computing." The oneAPI specification includes a direct programming language, powerful APIs and a low-level hardware interface which seeks to eliminate the complexity of separate code bases, multiple-programming languages, and different tools and workflows. 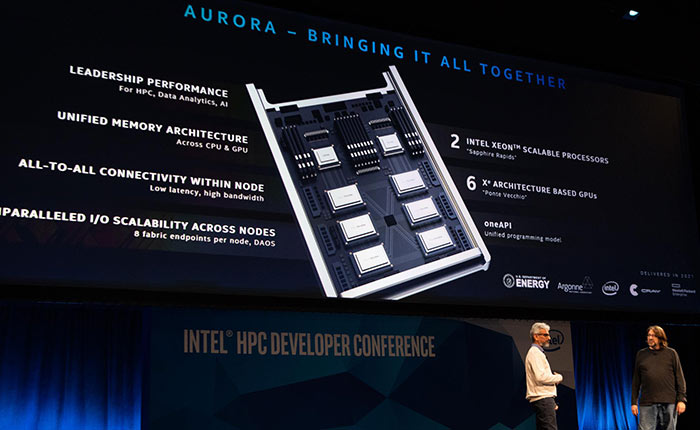 Last but not least, Intel has already got a big name collaborator willing to invest in its Ponte Vecchio GPUs and oneAPI software. The new Aurora supercomputer system at Argonne National Laboratory will use this new Intel tech at its heart. A wide portfolio of Intel products will be utilised by Aurora; building upon the Intel Xeon Scalable platform with 10nm Sapphire Rapids CPUs, using Xe architecture-based Ponte Vecchio GPUs, as well as Intel Optane DC persistent memory and connectivity technologies. In other stats, Aurora will support 10 petabytes of memory and over 230 petabytes of storage.The new Aurora supercomputer is expected to be delivered in 2021.

What's interesting is that they're saying 7nm rather than 10nm. I thought Xe was on 10nm?
Posted by Yoyoyo69 - Mon 18 Nov 2019 10:18
I'm still very puzzled how they can create a gpu without accidentally infringing IP of the very experienced and well established competition.

Then when you look at the speed they have thrown it together, even if it's just terrible, I'd be very suspicious they intentionally stole ip
Posted by rabidmunkee - Mon 18 Nov 2019 10:37

Then when you look at the speed they have thrown it together, even if it's just terrible, I'd be very suspicious they intentionally stole ip

competition like to wait for it to be released before the accusations, then they can say about loss of earnings and all that other stuff, more coffers
Posted by Tabbykatze - Mon 18 Nov 2019 10:48

Then when you look at the speed they have thrown it together, even if it's just terrible, I'd be very suspicious they intentionally stole ip

Depends if they're utilising any “special sauce”.

A GPU core is relatively unlicenseable/patentable, it's the funky cool stuff to make it do weird and wonderful better things that are.
Posted by KultiVator - Mon 18 Nov 2019 10:59

Easy to overlook that Intel already offer GPUs, albeit very weak integrated ones… so this is more an evolution (admittedly a pretty major evolution) than a cold start for them.

They're already pumping triangle-based geometry, textures and shaders, etc through a (underpowered) pixel pipeline to a screen buffer via their Iris/Iris Pro chipsets - so the principles are well trodden by Intel, we've just not been accustomed to them playing at the mid-to-high end of this particular field.

Fingers crossed a three-horse race in the GPU market will help drive better pricing for consumers… Intel doing this on a 7nm process is perhaps a sign they'll hit the ground running.