HEXUS was at the unveiling of the first 7nm Navi GPU-based graphics cards from AMD at Computex 2019. If you follow that link you can find out lots about how Navi leverages the GCN plus RDNA architectures for its performance gains, and on the following page you will see the first two graphics cards based on Navi that are destined to launch on 7/7, the Radeon RX 5700 and RX 5700 XT. These are AMD's reference designs - and it also teased a special Radeon RX 5700 XT 50th Anniversary Edition with gold accents, higher frequencies and a $50 price hike (see below). 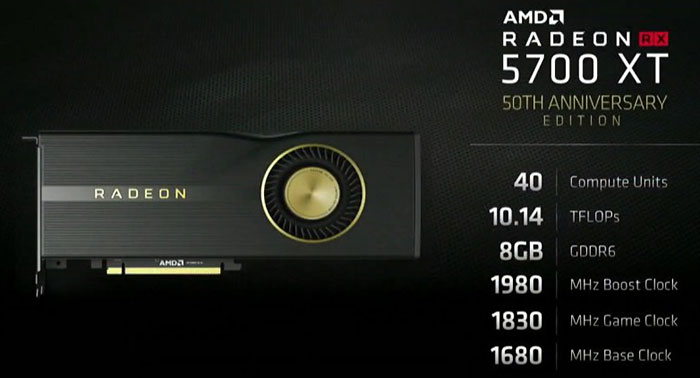 Gamers and enthusiasts are understandably keen to see the Radeon RX 5700 and 5700 XT launch in early July - and sites like HEXUS are itching to share third party gaming and productivity tests using these brand new GPUs. However, if those interested are expecting a bevy of third party custom cooler RDNA-infused graphics cards to launch on 7/7, alongside AMD's reference designs, they might be disappointed…

Tech site Fudzilla said it was surprised there were no AMD AiB partner announcements to coincide with AMD's unveiling of the first Navi graphics cards. Probing a little deeper, it is quoting various sources and its headline says that custom Radeon RX 5700 designs won't arrive until mid August "if all goes well". Fudzilla's report sounds reasonable but, standing alone as it does, it might require a little pinch of salt. (BTW some Computex reports mentioned ASRock had Navi graphics card prototypes on show (see image below), but the AMD partner was cagy about exactly what it was showing.) 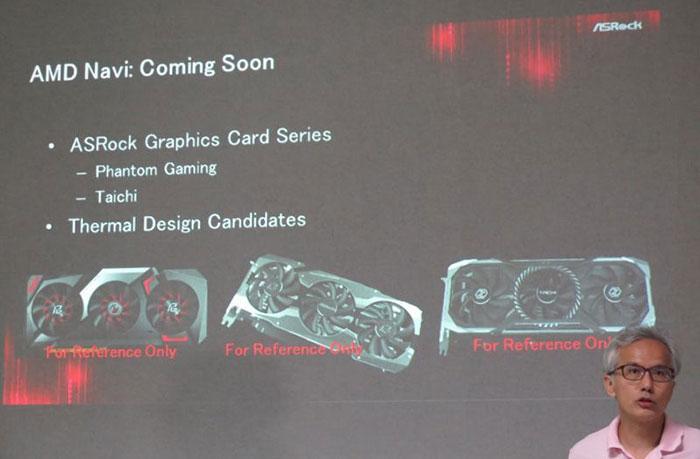 Tempering the above 'bad news' somewhat, Fudzilla offers its praise to the reference Radeon RX 5700 XT cooler design - which will be your only choice if you want to purchase this card for the first month or so. 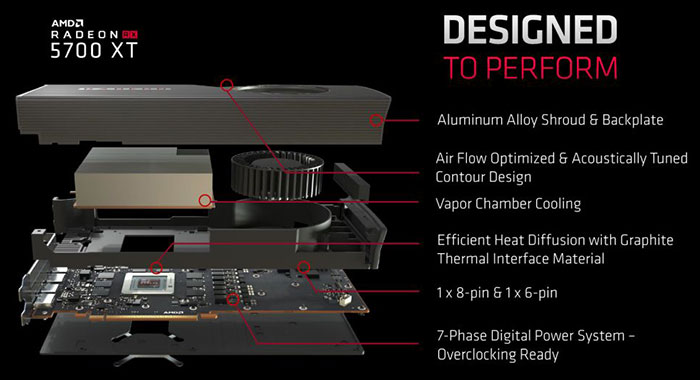 As noted in the slide above, the blower type cooler isn't something lazily repurposed from a previous generation. It has a thoughtfully put together component set including air flow optimised and acoustically tuned contours, uses vapour chamber cooling tech, it is OC ready with its 7-phase digital power, and AMD has pre-applied a specially selected graphite based TIM.

Posted by darcotech - Tue 18 Jun 2019 10:29
So the fact that their special edition couldn't hit validated boost clock at 2Ghz or more tells me that AMD still has a problem running their chips at higher freq and this is where nvidia is killing them (too).
Also, power is still not really resolved, it may be better than before compared to older Radeons, but still not close to what nvidia offers. Too bad.

We are going to order some for internal testing but I think that AMD failed on this one. Well, at that price range. Nvidia will surely cut the prices a bit. By September I expect AMD to lower the prices for their GPUs significantly. Good thing is, their in very positive position on CPU side.
Posted by 007 - Tue 18 Jun 2019 11:58
It is fine AMD, no need to rush it, no one is going to buy it at those prices anyway.
Posted by [DW]Cougho - Tue 18 Jun 2019 12:51
RIP Navi then.

It will be hot, loud (even if they have restricted the fan speed) and throttle on the blower. The first reviews are what count and without any custom designs to review for months that's going to be the enduring memory of Navi. It's the curse of every AMD launch.

darcotech
So the fact that their special edition couldn't hit validated boost clock at 2Ghz or more….

darcotech
So the fact that their special edition couldn't hit validated boost clock at 2Ghz or more….

Where does it say they validated for 2Ghz?

That what I am saying.Read better. They didn't. The Boost clock for special edition is 1980Mhz, just 20Mhz shy off 2Ghz. That means they could not (also written “couldn't”) validate that speed.

Because if they could, the marketing would be all over “Special 2Ghz 50yrs edition”