AMD is undertaking last minute preparations for its Next Horizon Gaming event at E3 2019. As Dr. Lisa Su readies herself to spill more details on "upcoming products and innovations that will shape the future of gaming," some information has emerged, which suggests we might see as many as five RDNA infused Navi graphics card SKUs at the event.

Twitter hardware enthusiast Komachi shared this Tweet from rra_bot which includes a link to the South Korean Radio Research Agency, a regulatory body that checks electronics components passing through the country's borders. A screenshot of the official regulatory page is embedded below. 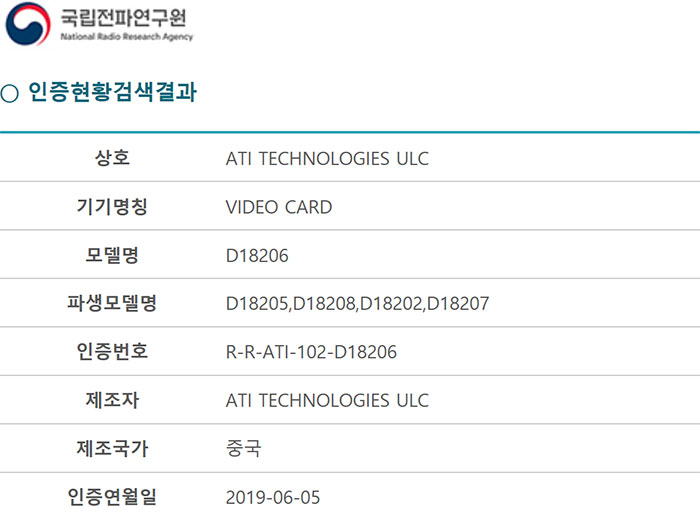 As PCGamesN points out, the above "is not necessarily confirmation that there will be five different Navi variants at launch". However, it is reasonable to assume there won't be just the single Radeon RX 5700 graphics card we have seen announced, either, as it is a 'Series'. AMD traditionally launches a number of cards based upon the same GPU design at the same time.

At its Computex keynote, AMD compared a Radeon RX 5700 graphics card beating the Nvidia GeForce RTX 2070 in Strange Brigade performance tests. However, that game is widely known to comparatively favour AMD hardware. At the upcoming Next Horizon Gaming event at E3 let us hope for some more thorough benchmarks - and a precise set of launch dates and MSRPs would be welcome too. Whatever happens at E3, the first Navi-GPU cards for consumers won't start to ship until July.

Hosted by The Game Awards creator Geoff Keighley, AMD's Next Horizon Gaming event will be held at The Novo at L.A. Live on Monday, 10th June, 2019, at 3pm PT.

Meanwhile, Nvidia is expected to make good on its "something super" teaser at E3. It looks like an interesting week ahead…

19 QOTW: Do you use a discrete graphics card?

Don't they still call it the ATI technologies division internally under the Radeon Group?
Posted by philehidiot - Fri 07 Jun 2019 21:53
Just a thought… I bet Hexus already knows all this stuff but is under an NDA, so they can release leaks and “speculate” but it's all pretend speculation and a game as they know what's happening anyway…

philehidiot
Just a thought… I bet Hexus already knows all this stuff but is under an NDA, so they can release leaks and “speculate” but it's all pretend speculation and a game as they know what's happening anyway…

Suspect not… seems AMD has managed to keep everything pretty quiet around the new GPU releases, other than what they've chosen to tease us with.

E3 (next week) will probably be the first chance for the press and tech sites to get a first look at more details and possibly get their hands on product.
Posted by Xlucine - Sat 08 Jun 2019 00:21

philehidiot
Just a thought… I bet Hexus already knows all this stuff but is under an NDA, so they can release leaks and “speculate” but it's all pretend speculation and a game as they know what's happening anyway…

If AMD had big stories they wanted the press to report on then there could be NDAs (like just before the launch, for reviews, or if they were seeding info for a deep dive into the architecture). That'd be unlikely this far out from the launch