Building on the foundations of the first-generation Epyc 'Naples' server and workstation processors released last year, Dr. Su reaffirmed some high-level details on the upcoming Zen-2-based 'Rome' processors scheduled for release in Q3 2019.

A single second-generation Epyc processor will offer improved instructions-per-clock-cycle throughput via its enhanced architecture - more details on this will be shared in upcoming tech events, though some extra info was offered last November - up to 64 cores and 128 threads - double that of the first generation - and huge I/O and memory potential.

Providing a glimpse of potential performance on an early-silicon CPU, AMD showed off a 2P Rome-based Epyc system running twice as fast as a 2P Intel Xeon Scalable 8280 (chips at ten grand a pop) machine in an intensive protein-folding benchmark. That's what 256 threads in a single system will do, we guess. Highlighting the growing strength of Epyc, AMD says that twice the number of platforms are in development compared to first-generation Epyc which, if you remember, has the same SP3 socket as the newcomer.

Of greater interest to gamers is what AMD is doing to compete against Nvidia's latest-generation Turing GPUs. The answer, initially, is a number of mainstream cards based on the all-new Navi architecture. Also using silicon on a 7nm node, Navi will offer 25 per cent more performance than Vega on a clock-for-clock basis - again, the fundamental architecture improvements, memory subsystems, etc., will be discussed later, but we do know that Navi will use a brand-new compute unit design, smarter caching, and cleaner graphics pipeline to achieve the performance uptick. Thanks to a smaller, more-efficient process and architecture, PCIe Gen 4-compatible Navi offers 50 per cent more performance per watt, Dr. Su said. It's this solid hike in PPW that gets us most excited.

Putting these claims into performance context, Dr. Su announced that the first slew of Navi-based cards are to be known as the Radeon RX 5000 family, headlined by the RX 5700. Its performance is said to rival that of the Nvidia GeForce RTX 2070 - AMD showed it running 10 per cent faster in Strange Brigade, a title where it usually wins in - albeit without specific hardware ray-tracing support, so we're interested for a couple of reasons: to see if it lives up to the performance billing from both framerate and efficiency and, secondly, just how aggressive AMD gets with the price.

For what it's worth, having seen an RX 5700 die up close, we reckon it's about 300mm². Readers wanting some Navi goodness won't have to wait long; AMD says that cards will be on shelves in July 2019.

Conjecturing somewhat, we reckon that Radeon RX 5700 will be productised as the XT and Pro, priced at $499 and $399, respectively.

Keeping most of the meaty disclosure until last, Dr. Su expanded upon upcoming third-generation Ryzen CPUs that's also built on the same 7nm Zen 2 blueprint as the latest Epyc CPUs. Compared to first-generation Zen, the modified architecture in Zen 2 chases IPC improvement first and foremost. AMD reckons that a bunch of improvements culminate in an average 15 per cent IPC improvement over what we have seen before. Helping matters along is twice the cache and twice the floating-point performance, too.

It's easier to put third-generation Ryzen's performance into context because AMD provided details on model numbers, speeds and feeds, and performance expectations.

First off the bat is Ryzen 7 3700X - an 8C16T part running at 3.6GHz base and 4.4GHz boost. Notable specs include a massive 36MB of total cache and restrained 65W TDP, made possible by that move to 7nm production. Those numbers are a fair bit higher than the specs of the also-65W Ryzen 7 2700, and AMD says you'll get an extra 18 per cent performance boost over the previous-gen model. 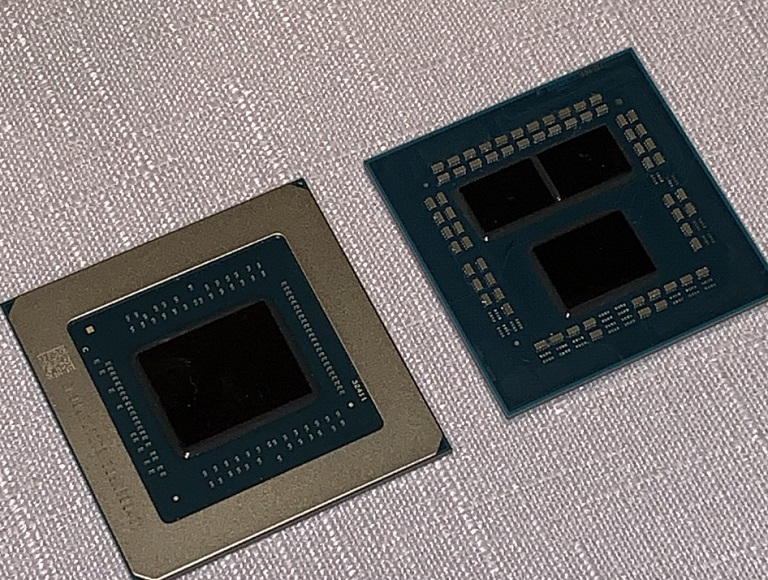 8C16T Ryzens are expected. What's truly new for the third generation is the Ryzen 9 3900X - a 12C/24T chip available on the same X570/X470 AM4 platform. Running at 3.8GHz base and 4.6GHz boost, and offering a whopping 70MB of total cache, this 105W TDP chip brings Rzyen's performance to a fundamentally new level, Dr. Su said. AMD showed off the Ryzen 9 3900X beating out an Intel Core i9-9920X - with Intel based on a more expensive platform - in both single- and multi-threaded tests while consuming a fair bit less power.

This new mainstream champ ought to be 40 per cent faster than Ryzen 7 3800X in the best-case multi-threaded scenarios, making it an attractive choice for true multitaskers. The kicker, as far as the enthusiast is concerned, is a $499 price point, which is the same as the original Ryzen 7 1800X debuted at. To that end, AMD believes it has upped single-threaded perf by 32 per cent and multi-threaded oomph by up to 100 per cent compared to 1800X. Not bad for a chip on the same socket and costing the same in dollar terms, right?

Third-generation Ryzen chips will be available on July 7, 2019.

So, there you have it. Ryzen 3000-series CPUs at the beginning of July, Radeon RX 5000 GPUs by the end of July - busy time for us reviewers! - and second-generation Epyc later on this year. The AMD wagon keeps on rollin'.

Posted by Millennium - Mon 27 May 2019 05:34
First thread reply :)
Long awaited and nice to get past the rumour posts and disinformation.
Thank you for the morning update Hexus. Some staff and people must have stayed up and worked hard to see this happen.

I would probably choose the [edit: 3700X is $329 rrp :/ below is under 16 threads. Can manage ~4.5 GHz I guess.] … As the "a bunch of improvements culminate in an average 15 per cent IPC improvement over what we have seen before" statement (from AMD.) shows that if I can run 16 threads at 4.3 GHz or so that may be a value proposition.

Millennium
First thread reply :)
Long awaited and nice to get past the rumour posts and disinformation.
Thank you for the morning update Hexus. Some staff and people must have stayed up and worked hard to see this happen.

I would probably choose the 3700 or 3600 assuming they were lower binned 3700x at some stage. As the "a bunch of improvements culminate in an average 15 per cent IPC improvement over what we have seen before" statement (from AMD.) shows that if I can run 16 threads at 4.3 GHz or so that may be a value proposition.

My question for Hexus is - Will these chips work in an X470 motherboard? Particularly the MSI Gaming Plus X470.

A bunch of X470 boards are certified for 3rd Gen. Manufacturers will update their respective lists, starting today.
Posted by acekorneya - Mon 27 May 2019 05:58
At 499 for the 12 core 24 threads is a really good deal for Workstations.. and the cool thing is that we all know that there is a 16 core variant out there in the world but we wont see it until the next series like Ryzen 4000 or later and it will still be compatible with X series motherboards the high end of course… but i knew we wouldn't see Ryzen at 5ghz maybe if you will be able to get another 200mhz at the most so 4.7+ if lucky… and we still don't know the all core clock boost for long periods of time… but for rendering 500 bucks is still a REALLY GOOD DEAL compare to Intel
Posted by Millennium - Mon 27 May 2019 06:32
Yes I did post some silly speculation on 5+ghz 32 thread in a discussion a few days ago - sorry about this - reading too many iffy articles I guess. Curse of the 'net.

Another question for readers and perhaps Hexus - I have a B350 Gaming Plus from MSI too which has been really good after AGESA updates were deployed and perfectly good while it does have 1 or 2 PCI slots and 4 sata. Is this chipset series going to be Ryzen 3nnn compatible for us too? I saw a rumour that it may not (though it is 2nnn series compatible I believe).
I also have a smaller B450 board that I would expect over the next few months could be updated to a 3700(X) compatability status. It's an Asrock #B450M-HDV. I have a spare 2 series APU to do updates.

Why my rented flat is turning into a parts garage - I have no explanation so - good morning readers : ]
Posted by DanceswithUnix - Mon 27 May 2019 06:49
No 3600X listed for July? I guess that performance level is already catered for in the existing 2800X chips and they can use working core chiplets in the 12 core parts, but 6 cores is where I was expecting to buy. I guess that leaves me a choice, I could get a 2600X whilst they are cheap, or stump up for an 8 core Zen 2.

Millennium
Is this chipset series going to be Ryzen 3nnn compatible for us too? I saw a rumour that it may not (though it is 2nnn series compatible I believe).

Compatibility seems down to BIOS and power delivery rather than chipset. Some boards are dropping support for the old APUs like the A10-9800 to make BIOS space for the new CPU support, seems a decent trade. Cheaper boards may not handle the higher power requirement of a 12 core chip, but you probably wouldn't pair those together anyway.