The online FINAL FANTASY XV Benchmark graphics card comparison page has yielded another interesting set of results. Last month we saw benchmark scores shared there from the GeForce RTX 20 series, ahead of when third party review testing was allowed. This time the results include a graphics card dubbed '66AF:C1' in the 1400p and 2160p benchmark tables.

VideoCardz brought the result to our attention and asserts that the 66AF:C1 is an AMD Radeon Vega 20 GPU based graphics card. Evidence of this comes from official Linux driver references for AMD Vega GPUs.

While it may indeed be a Vega 20 based graphics card that has popped up in the FFXV tests, there is some doubt that it is a Radeon RX Vega, as AMD has only confirmed that the new Radeon Instinct, featuring 7nm Vega, will be released this year. It is possible that the board is an engineering sample of such a pro accelerator, with display connector(s) used for testing. 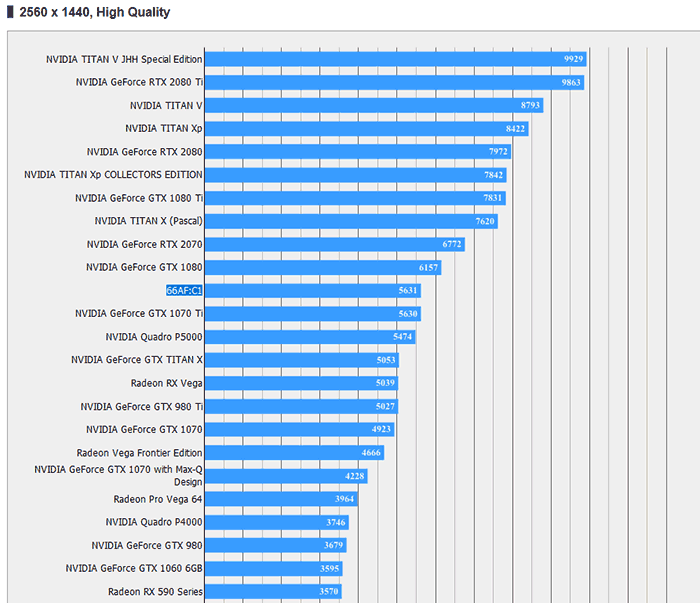 If you head on over to the FFXV benchmark tables page there are several tables featuring the 66AF:C1 device ID, and in all of them it nestles closely below the Nvidia GeForce GTX 1080. It is closest in 4K gaming tests it seems, I've embedded example tables above and below. 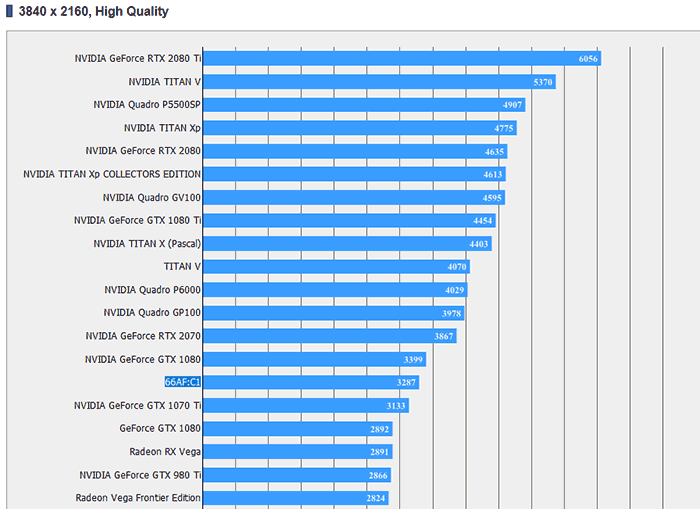 Vega 20 is expected to be faster and more power efficient thanks to the use of the 7nm node. It can also be paired with up to 32GB of HBM2, though that amount will be limited to top-end professional solutions.

At the start of the week we shared news on the 7nm AMD Navi GPU based graphics cards currently in testing in AMD's labs. It is supposed to be these that will be launched as Polaris replacements, not products based upon 7nm Vega chips. The source report, from Fudzilla, pointed to Navi-based GPUs facilitating graphics cards with GTX 1080 level performance, arriving at approx US$250, sometime next year.

Posted by plexabit - Fri 26 Oct 2018 21:12
1080 performance at $250 would absolutely kill Nvidia. All their cards are so above that price point this will be the easy choice for most people.
Posted by terrence81 - Fri 26 Oct 2018 21:19
250$ for that performance would be a sweat spot
Posted by aidanjt - Sat 27 Oct 2018 03:42
As if any more evidence were needed that FFXV is an absolute dumpster fire as a benchmark. Vega 10 already bats back and forth with the 1080, Vega 20 should be pressuring the 1080 Ti. Now if this were Navi, on the other hand, that'd be a different matter. But it's not like AMD's going to flippantly push out fraudulent code to the Linux kernel that'll need to be fixed in version following the card's launch. Linus, the display drivers devs, and distro kernel maintainers would get quite upset with them over that.
Posted by nobodyspecial - Sat 27 Oct 2018 12:42

plexabit
1080 performance at $250 would absolutely kill Nvidia. All their cards are so above that price point this will be the easy choice for most people.

If they charge less than 400 for 1080 perf, they deserve yet another bad Q report and management should be fired for trying to win an IMPOSSIBLE price war. You can't win a price war vs a company with no debt and billions in the bank when you are IN DEBT with less than a billion in cash. You will die long before they run out of money unless they put out an absolutely crap product for 3-4yrs. IE, Intel can bleed making ~20B a year now for ages vs. AMD's chips. The mistake AMD will make is charging too little which will just force Intel to respond by price cutting you to DEATH (as they can afford it), or at least until they're back on top perf wise. Meaning expect price cuts for a few years (2020 it stops? ONLY if 10nm is good) so you gain zero profits (share means nothing) so you can't do R&D for the next round. HOWEVER, if AMD actually pulls their heads out of their collective butts and charges prices that are WORTHY of Intel performance (while winning benchmarks), they will make money that will pay for R&D instead of just enough to cover interest on their debt as they've done for ages (idiots.)!

I'll tell everyone I know to sell their stock (myself included) if they charge less than $399 vs. 1080 if it performs like a 1080 as shown. I could understand a MINOR price disparity IF you're lacking in watts/heat dept, but if everything is equal anything less than $399 is moronic and begging for more analysts to down your stock! YOU WOULD DESERVE IT. I don't know who is picking pricing at AMD but they have been needing some firing for a decade. Price right, or sell the company to someone with an IQ so we can get back to real competition with AMD having the funds to do REAL R&D. They fund a gpu/cpu development then blow it on pricing front and have nothing to continue. I fear we'll do it again. Quit choosing HBM/HBM2 (soon HBM3?) and claiming 4k for your cards when NOBODY is using it and thus chooses the winner at their res of 1080p or 1440p (and not many at the higher res, never mind 4k…LOL). Why do you think NV owns the market? They make cards that aim at what we actually do. AMD keeps trying to chase things that don't exist yet or never will like console margins..LOL…or poor people APUs… LOL. Neither will make the company money to do anything other than cover your interest on your debt. You want real money, win in what we actually do. No not mining crap that is temp, but rather GAMING or APPS people will use for decades. Nvidia spends money on R&D that benefits it's users, and drops everything that doesn't make money (modems, mobile, quit if your bleeding massively before you die). Intel should have bought NV instead of spending 16B in losses on mobile…ROFL. They probably could have had them for less than that before NV took off. Intel's pride runs about as deep as AMD management stupidity.
Posted by kalniel - Sat 27 Oct 2018 13:05
Given the current price of vega cards I don't think anyone is seriously suggesting they'd charge $250 for Vega 20, that's more likely a target price for a Navi card, the Polaris replacement.