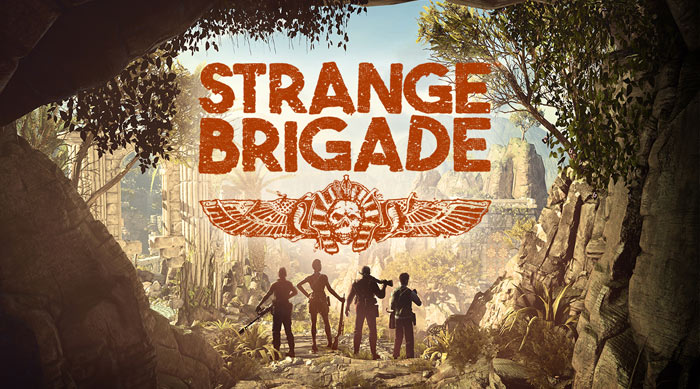 AMD crowed about the performance improvements delivered by its game ready driver for Strange Brigade, released last week. The Radeon and Ryzen maker said it worked closely with Rebellion to drive next gen API support with Vulkan and DirectX 12.

Strange Brigade offered multi-GPU scaling in DirectX 12 and Vulkan on the day of release but AMD is particularly proud of the Vulkan implementation. “The Vulkan API substantially reduces ‘API overhead’, the background work a CPU does to interpret what a game asks of the hardware. Enabling meaningful features, performance, and image quality, Vulkan exposes GPU hardware features that wouldn’t ordinarily be accessible through OpenGL,” wrote Anna Fieger on the Radeon Gaming Blog. 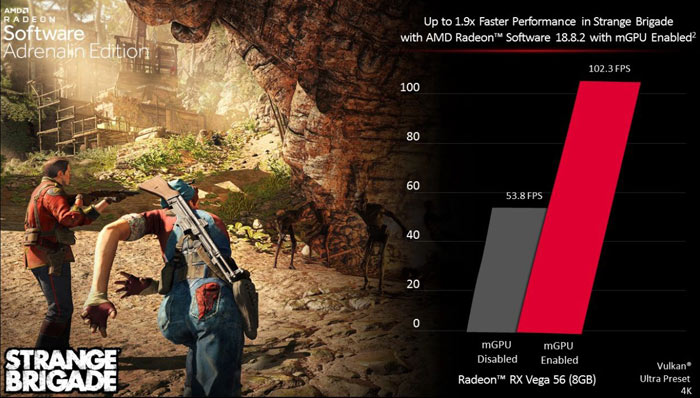 Above you can see that Strange Brigade performs admirably with multi-GPU enabled. Scaling of 1.9x performance using Vulkan with Radeon Software Adrenalin Edition 18.8.2 on two Radeon RX Vega 56 (8GB) graphics cards was observed. Vulkan multi-GPU required homogeneous GPU hardware. If you use the DirectX 12 API multi-GPU is also supported, but we haven’t seen performance figures shared for this configuration. 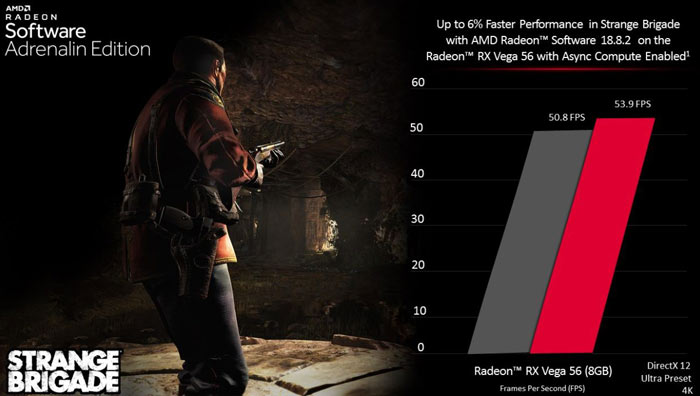 The good news for players of Strange Brigade on modern hardware doesn’t stop there. AMD also worked with Rebellion on implementing Async Compute in the new game. You can see in the chart above that this gives a worthwhile fps boost on the Radeon RX Vega 56 (8GB) running in 4K resolutions.

It will be interesting to see how many future games will come with support for the likes of Vulkan/DX12 multi-GPU and DX12 Async Compute.

Strawb77
glad to see x-fire/sli support in games, seemed to have gone out of fashion for some reason.
i`m sure there will be a lot of people here who will enlighten me as to why.

Buying two GPUs is usually quite expensive, and doesn't suit a lot of hardware. It's a purely enthusiast thing. Which means very few people have SLI/xFire to begin with.

Then game devs asked themselves why they work hard and optimise, improve, for the sub-1%.

It'd be popular again if engines and platforms just did the optimising for them, or knew natively how to make good use of multiple GPUs.
Posted by Kanoe - Tue 04 Sep 2018 15:24

Doom? Pretty sure that has mutli-gpu under Vulkan as I have the game and multi gpu's.

Ozaron
Buying two GPUs is usually quite expensive, and doesn't suit a lot of hardware. It's a purely enthusiast thing. Which means very few people have SLI/xFire to begin with.

Then game devs asked themselves why they work hard and optimise, improve, for the sub-1%.

It'd be popular again if engines and platforms just did the optimising for them, or knew natively how to make good use of multiple GPUs.

For DX9/11 and OpenGL the SLI/CrossFire work was done by the driver developers - the guys that implement the DX and OpenGL interfaces. It usually worked quite well, up to a point, but required driver-level hackery for some specific games (mostly down to game devs not following the standards or the driver devs doing weird stuff in the background).

DX12 and Vulkan require the game engine developers to do the multi-GPU work. This means the games using said engines tend to be more efficient and it puts the “making it work well” ball squarely in the game/engine developer's court. *If* the developers have the time/budget to cater to the minority with multiple GPUs then they can likely do it better than SLI/CrossFire ever could.

Also, pretty sure that sub-1% figure is too low. AMD have been pushing the RX4/5xx series to budget-orientated gamers as you can buy one, then get another later and get a nice performance jump. Just a hunch. I don't have any figures to back this up, but I'm pretty sure it's too low.
Posted by shaithis - Tue 04 Sep 2018 15:29
I am 99% sure DOOM does not support mGPU