Intel has delivered a new Graphics Driver for Windows which includes new PC gaming features. This latest driver, version 15.65.3.4944, is for Windows 10 64-bit and for systems equipped with a 6th Gen Core Processors or newer (including systems with 8th Gen Core Processors with Radeon RX Vega M Graphics). At this stage the headlining games optimisation feature is still in beta and limited to a handful of games. 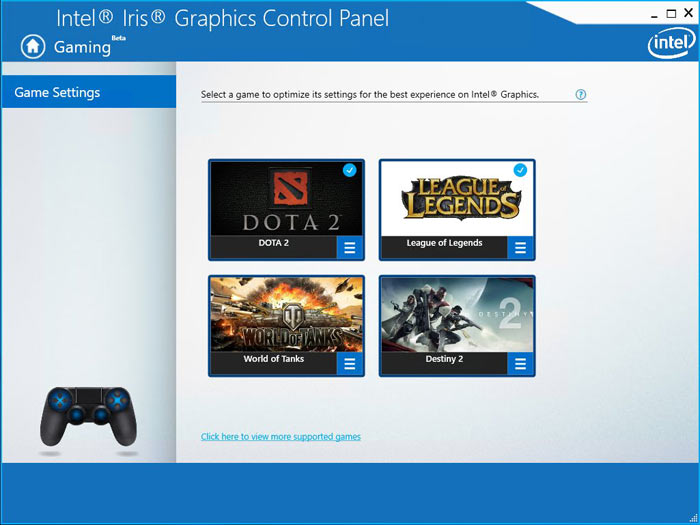 Above you can see a screen grab from the new driver's Game Settings, and optimisation, panel. There aren't a great amount of games that are supported by the auto-optimisation feature. The small but nicely formed list is as follows; Battlefield 1, Battlefield 4, American Truck Simulator, Call of Duty WWII, Destiny 2, DOTA 2, Grand Theft Auto V, League of Legends, Overwatch, and World of Tanks. Remember Intel still hosts a website where you can find recommended game settings for many more games - gameplay.intel.com.

Other highlights of the Intel Graphics Driver for Windows version 15.65.3.4944 are that it is the launch driver for both Age of Empires: Definitive Edition, and Final Fantasy XII: The Zodiac Age HD.

Outside of gaming this latest Intel driver includes several other improvements, most notably:

You can download and read more about this driver on Intel's site.

I remember asking about Nvidia's GeForce Experience, or whatever it was that's supposed to optimise your games based on your particular hardware combination, and everyone just said “NOOOOOOOOOOOOO…….!!!!!”.
Posted by cheesemp - Wed 14 Feb 2018 11:31

I remember asking about Nvidia's GeForce Experience, or whatever it was that's supposed to optimise your games based on your particular hardware combination, and everyone just said “NOOOOOOOOOOOOO…….!!!!!”.

I found the AMD one quite useful (Raptr) - It was never perfect but it gave you a good heads start on finding optimal settings as it based on other users feedback. You still need to tweak them sometimes but it sped things up. Shame its gone now…
Posted by CAT-THE-FIFTH - Wed 14 Feb 2018 11:46
Now you get 16 FPS instead of 15 FPS.
Posted by DemonHighwayman - Wed 14 Feb 2018 12:38

I remember asking about Nvidia's GeForce Experience, or whatever it was that's supposed to optimise your games based on your particular hardware combination, and everyone just said “NOOOOOOOOOOOOO…….!!!!!”.

I've never had many problems with Nvidia's GE, it just adjusts the ingame settings, the only problems i've had are with cities skylines not working correctly and some ubisoft games not being able to be optimized, oh and plenty others not being detected.
Posted by Percy1983 - Wed 14 Feb 2018 12:59
I can say I did quite like the AMD raptr program as it actually worked or got you very close very quickly. Likewise it sometimes adjusted things which couldn't be adjusted with in game options.