Gigabyte has just made its Radeon RX Vega 64 Gaming OC 8G official. This is significant as it is Gigabyte's first custom design based around an AMD Radeon Vega GPU, rather than a reference design product. The Gigabyte Radeon RX Vega 64 Gaming OC 8G comes sporting a black and red Windforce 2X cooler design but sorry, no LED lighting. Some sites, such as Fudzilla, reckon Gigabyte will follow up shortly with a similar design RX Vega 56 graphics card. 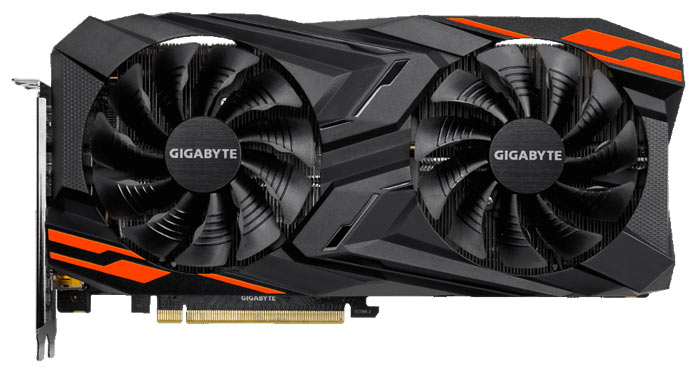 Strapping on Gigabyte's Windforce 2X cooler helps deliver a graphics card that is faster than reference fresh from the box, as would be expected from a Gigabyte 'OC' suffixed product release. If you have read previous HEXUS reviews of AMD Radeon RX Vega 64 based graphics cards you won't be surprised to hear that the 'OC' is rather modest. Check out the comparison table below to see how this model compares to the reference air and water cooled versions. 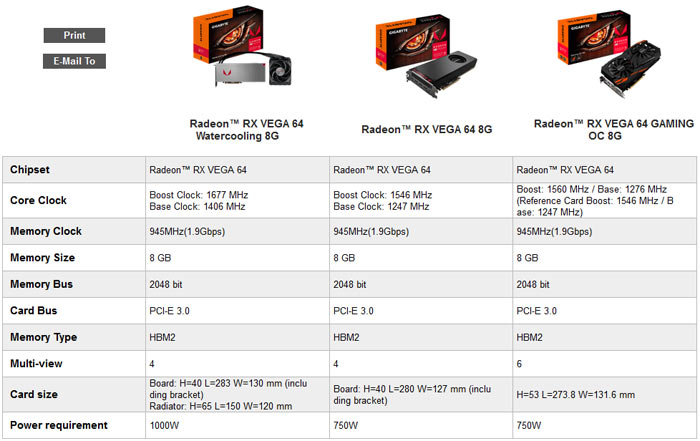 Beyond GPU core clock speeds, other things of note highlighted in the comparison table above are; that the Gigabyte card is capable of 6x multiview configurations, and the Gigabyte card is 13mm taller than reference designs. The multiview capability is enhanced by the provision of HDMI x3/ DisplayPort x3 connectors, and the Windforce X2 is so tall because of its twin 100mm fans and radiator / heat pipe construction. 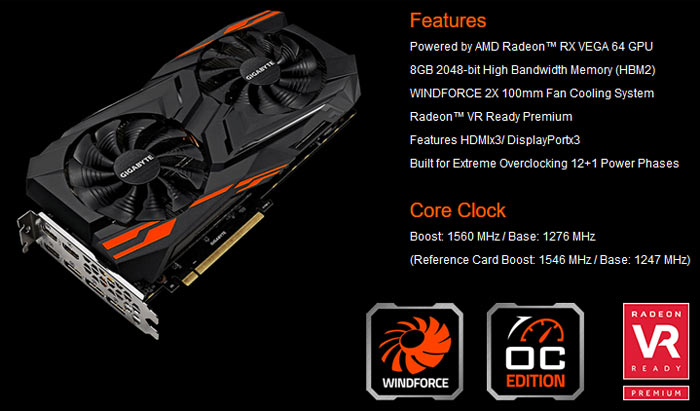 On the topic of the cooler, Gigabyte has gone with specially designed fan angular and unequal fan blades, and the fans spin in opposite directions. These '3D Active fans' are semi passive so will be still / silent when the system is running on light tasks or is idle. Under the fans is a large finned aluminium structure laced through with composite copper heatpipes which offer direct GPU cooling. Round the back Gigabyte has installed a copper plate with extra heatpipe and a back plate to provide a "well-rounded thermal solution". 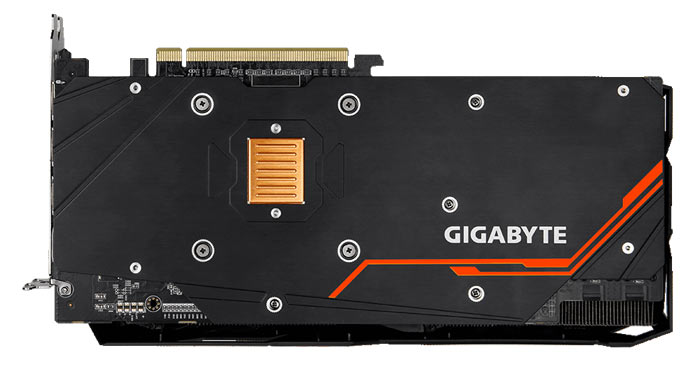 Overclockers will appreciate the 12+1 power phases on the card for lower temperature and stable voltage output, reckons Gigabyte. Elsewhere in the card construction Gigabyte has, as usual, leveraged "ultra durable materials," and the aforementioned backplate helps with overall durability too.

Gigabyte has yet to provide us with information about pricing and availability.

Posted by DanceswithUnix - Thu 30 Nov 2017 12:56
Triple slot cooler, wonder if that will put the crypto currency miners off if they can't fit so many in a frame.

I am more interested in a Vega 56 that is actually available to buy and around the original RRP.
Posted by Xlucine - Thu 30 Nov 2017 18:16
Wonder why gigabyte went away from offering 3 fans? We've just had MSI revert to the GPU standard of 3
Posted by SylvanSagacious - Thu 30 Nov 2017 20:57
Either the 3rd fan offered limited improvement in cooling or their trying not to undercut the Aorus range.

The listed power requirements are 750w for air, and 1k for water. Obviously they're being very conservative with the amount of substandard psu's out there. The highest tdp I've seen on the air vega was just under 500w. So the water cooling unit adds a bit more.

That would still need a good quality 750w psu for a water vega. The custom cool'ed 1080ti's barely break 400w.

I use an 850w, but I thought that was just me being silly and going overkill. If I wanted Vega I might actually have to get the board draw calculator out.
Posted by cascadde - Sat 02 Dec 2017 00:54
VEGA costs way too much now, might as well get a 1080ti for this money.