A week or two ago Nvidia published its latest set of financials. The results were good, with revenues and profits topping estimates and the Nvidia CEO Jensen Huang commenting "We had a great quarter across all of our growth drivers". Specifically in gaming, we learned that Nvidia enjoyed 32 per cent QoQ and 25 per cent YoY growth in revenue to rake in $1,561 million in the most recent quarter. However, we didn't hear data about units shifted and market share but luckily Jon Peddie Research has just published a report on such matters.

From an overview published by JPR we learn that North America, Western Europe and Asia Pacific saw a high-end GPU growth rates of 5.78 per cent, 6.63 per cent and 9.61 per cent respectively. A JPR analyst said that the PC platform continues to be very strong for gaming as it delivers; increased graphical detail, improved control, flexible customisation in both software and hardware, countless accessories, and the backing of eSports. JPR noted that the PC's aspirational and flexible qualities helped precipitate growth in all tiers, but especially at the high-end (see chart below). 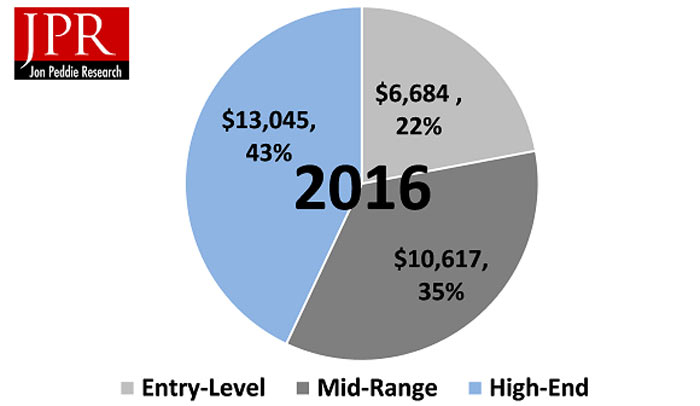 Tech site VentureBeat has leafed through the new JPR report and unveiled some further interesting nuggets about the state of the graphics card market. GPU attachment rates were up in Q3 2017, with 39.55 per cent of all PCs shipping with discrete GPUs, that's up 4.18 per cent. 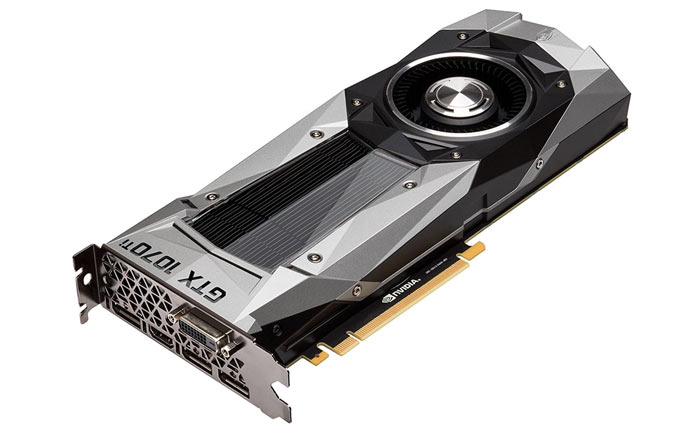 With the above competitive landscape in focus it looks like AMD and Intel's partnership in integrated graphics is a canny move to turn the tide which has been flowing in Nvidia's favour for so long.

Their total incompetence in bringing a competitive GPU to market is costing us all dear.
Posted by afiretruck - Tue 21 Nov 2017 15:33

Bagpuss
I really am beginning to despise the people at AMD's RTG for their shambles & failure of a GPU, Vega.

Their total incompetence in bringing a competitive GPU to market is costing us all dear.

The uArch that the Vega GPU chips are based off is revolutionary, and is leagues ahead of NVidia's Pascal (at least the Pascal that's present in GeForce. I haven't had a chance to work with the Quadro cards - way too expensive for what they are).

I have to wonder if the Vega uArch lends itself better to being smaller chips (1024 - 2048 cores) clocked a little slower, but with many chips packed together on Infinity Fabric (cheaper, more cores, lower power consumption). Maybe the big, fast, hot Vega GPUs we have is just a stop-gap before Navi is released and we get to see it really shine?

Either way, the technical advances that Vega brings are pretty damn exciting and we should consider ourselves lucky we still have some competition in the market to enable this.

I agree that NVidia are fleecing PC gamers right now, but it won't remain like that for long. If their GPUs are too expensive, then just don't buy them (my view for the last 3 years).
Posted by CAT-THE-FIFTH - Tue 21 Nov 2017 17:29
The Hexus article missed out this nugget of info PCPER posted:

Intel graphics market share decreased. AMD and Nvidia gained more marketshare in a market which had more sales than the last quarter.

That means more people are buying dGPUs for their systems and I suspect it is down to Ryzen probably not having an IGP,and more Intel systems using a dGPU.

That indicates AMD desktop APU shipments have probably crashed,otherwise their marketshare would not have been flat.

It seems the market shares of Matrox and S3 have finally disappeared into the noise, leaving only Intel, AMD and NVIDIA represented in the breakdown of global GPU market share. In all cases the total amount of sales have gone up, which fits in with seasonal patterns and demonstrates that while the PC market may be wounded, it is far from dead. Intel's total GPU sales increased by 5% from last quarter, which translated to a loss of 3.2% of total market share. AMD saw a total increase of 7.6%, their desktop GPUs alone increased by 16.1%, however that was only enough to keep them at the same ~13% of the global GPU market. NVIDIA saw the biggest increase, a 29.5% jump in sales, which gives them just under 20% of the GPU market to call their own.

Looking at the figures,its quite interesting,it shows that more people are equipping Intel systems with dGPUs and Ryzen having no IGP means more dGPU sales for both AMD and Nvidia. It might explain why Nvidia kind of likes Ryzen!! :p

So AMD and Nvidia have both increased dGPU sales,at the expensive of Intel but Nvidia got more of them,and I suspect a lot of the increase might even be down to Ryzen,as the Intel drop is nowhere as big as the increase in BOTH AMD and Nvidia sales.
Posted by Xlucine - Tue 21 Nov 2017 20:40
Raven ridge is just what AMD needs to boost marketshare - it's got the ryzen touch, and bundles a GPU
Posted by SylvanSagacious - Tue 21 Nov 2017 22:57

CAT-THE-FIFTH
Looking at the figures,its quite interesting,it shows that more people are equipping Intel systems with dGPUs and Ryzen having no IGP means more dGPU sales for both AMD and Nvidia. It might explain why Nvidia kind of likes Ryzen!! :p

AMD would need RavenRidge to get picked up heavily in bulk orders with the likes of Dell and Fujitsu etc; I wonder if Intel are still pulling shady deals to block that.

Also, with the IGP deal with Intel at least they'll get something, though it kind of feels like AMD are hobbling RR before it has a chance.