Nvidia has released a new driver set today, for owners of products powered by its GeForce range of GPUs. The new GeForce Game Ready 388.00 WHQL drivers offer optimisations for two of the biggest games released this week; Destiny 2, and Assassin's Creed Origins.

Last week we noted that Activision Blizzard / Bungie had released the Destiny 2 PC launch trailer. The game is set to be released / unlocked for pre-downloaders tomorrow. Just in the nick of time, Nvidia today released a game ready driver optimised for this blockbuster action shooter adventure.

For eager Destiny 2 players Nvidia says it has tuned the 388.00 WHQL drivers to provide performance optimizations, and an SLI profile “for enthusiasts seeking the fastest framerates and highest levels of detail”. 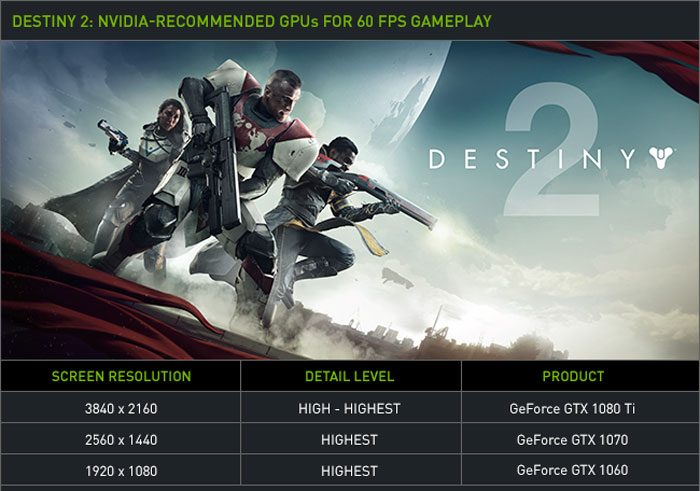 If you are interested in what kind of Nvidia-based setup is recommended for various gameplay resolutions and detail levels check out Nvidia’s quick reference chart above. Previously Nvidia published a Destiny 2 Graphics and Performance Guide to show how to get the best from this game arriving on PC shortly. Nvidia reminded us that it is currently running a Destiny 2 promotion – providing the game for free with a GeForce GTX 1080 or 1080 Ti, a pre-built PC or laptop with either of those GPUs inside.

At noon we wrote about the PC specs for Assassin's Creed Origins, which is due for release on Friday. Nvidia’s latest 388.00 WHQL drivers are also tuned for the best experience as you play through Ubisoft’s Ancient-Egyptian open world adventure. 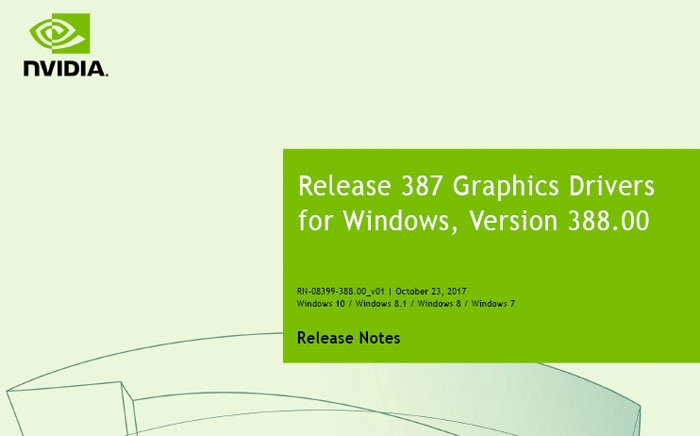 Other updates delivered by v388.00 will be welcome to certain mobile gamers. There’s only one fixed issue but it sounds rather annoying to have suffered through - GeForce GTX 1080 laptop (with G-Sync) gamers previously were encountering stuttering while playing games such as Doom, CS Go, and Witcher 3 on external displays – this bug is now quashed.

You can download the newest graphics card drivers direct from Nvidia or via the GeForce Experience PC accessory application.

Please note that Alienware laptops with GM204 GPUs (GTX 980 graphics) are not supported in this driver release. Nvidia promises that support for these products will be added in the next driver release.

I want to try these to see if these fix the red/green highlighting issues on video playback but I've a sneaky feeling that if I did use these drivers, it would break the textures once again in No mans Sky, Day-z and a few other titles so I shall wait for 2 weeks to see if any hotfixes appear before installing.

Have AMD and Nvidia swapped driver teams by any chance ;)
Posted by EvilCycle - Tue 24 Oct 2017 13:57
I just want GeForce experience to stop telling me it can't optimize any of my games, not because I want them optimized, but because I can't use the DSR factors through it. It has been this way for over a year now and no amount of reinstalling or faffing around seems to work. (I don't like the way it works through Nvidia control panel as you can't see the physical resolution in the game settings when you do it that way, it just shows whatever your display is set to. With GeForce experience you can clearly see in the game settings that the resolution is set to 4k or whatever you have set.)