Slides from the Intel Annual Investor Meeting in Santa Clara, Ca. have been published showing the Intel R&D Pipeline, or what is often called a roadmap, from current developments to 2015+ estimates. The infographics show the timescale expected to move from current production of 22nm to estimated production of 5nm lithography, materials and interconnects in 2015+. 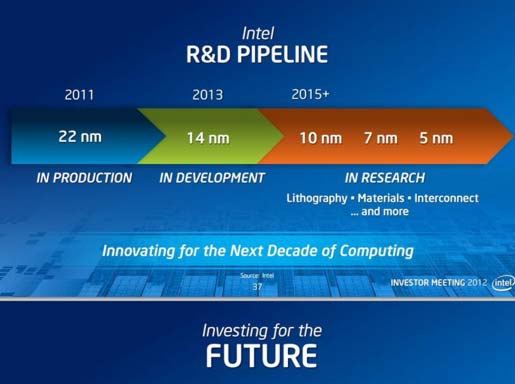 Regular HEXUS readers will know that the newest Ivy Bridge processors from Intel use the 22nm process. From the new roadmap it looks like the next process size reduction to 14nm will come very shortly, just a year or so away. The process can have a significant impact on the power use, performance and of course size of the finished processor so enthusiasts follow this fabrication development closely. The Ivy Bridge 22nm process was however widely regarded as a bit of a disappointment due to the heat issues with the 3D transistor tech brought in to accompany and facilitate the die size shrink. So shrinking the process must be researched alongside complimentary technologies.

There are a couple of recent examples of process shrink advantages from Intel competitor ARM: Last week we found out Apple had secretly upgraded its iPad 2 models with a smaller process CPU which, clocked at the same speed as the previous larger process model, gave very noticeable battery life advantages. Showing the flip side of the equation TSMC shrunk the process size of an ARM chip to produce much higher clock speeds at similar to previous generation power usage. So process shrinkage can be used to facilitate reduced power consumption or higher performance or, more usually, a bit of both. 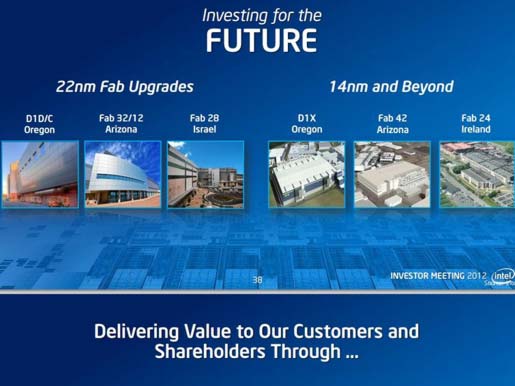 It does seem like ARM is firmly in the sights of Intel with this roadmap. Mobile and tablet markets are looking increasingly attractive compared to laptops and desktops. Intel’s mobile chips are currently at 32nm which is on a par with ARMs latest products. Many people have happily paid a lot more for a mobile phone than they have done for their main PC. Especially thanks to what could be described as the “easy payment terms” of a mobile contract. Intel CEO Paul Otellini confirmed the mobile and tablet focus “next year you will see phone and tablet chips shipping at 22nm and the year after that you'll see 14nm.”

Or is this really just the crappy TIM Intel have used, as highlighted in one of your other articles today?
Posted by Devastater6194 - Tue 15 May 2012 10:51

Steve
Intel have to get a ‘tock’ in before they change feature size again for their CPUs, so I reckon it'll be 2014 before we see any i-series CPUs at 14nm, and they'll be running whatever micro-architecture comes forth in the next 12 months.

Unless they use IB-E as the tock then delay haswell till later in the year as 14nm tick.

The whole reason they replaced solder with thermal paste is because they are focusing on mobile sector where there is no overclocking so the chips are fine for laptops etc.
Posted by miniyazz - Tue 15 May 2012 17:29

Devastater6194
The whole reason they replaced solder with thermal paste is because they are focusing on mobile sector where there is no overclocking so the chips are fine for laptops etc.

In that case they could have only used thermal paste for laptop CPUs.. Besides, laptops are an environment where you don't want poor heat dissipation. Really the only place it isn't a big deal is the non-K desktop chips.. and even then it's additional, unnecessary noise.
Posted by kingpotnoodle - Wed 16 May 2012 09:32
Unless you overclock the temperatures are within acceptable limits easily thanks to reduced overall TDP, a chip is fine ticking along with the new TIM. There may be technical reason other than cost shaving we don't know about.

K series chips come with no promise on overclocking, still you can achieve good boost using improved cooling so I think this is just people asking for the moon on a stick for the price of a cheese and pineapple nibble.