During the Intel Architecture Day 2021 presentation, there wasn't a lot said about the integrated graphics component of Alder Lake processors. In summary, we only really know that these 12th gen Core processors will come with integrated graphics based on Intel's Xe architecture. We have already seen Intel Xe-LP in laptops (e.g. the Intel Tiger Lake-H Core i9-11980HK with Iris Xe graphics), so there isn't anything significantly new, as far as we know. 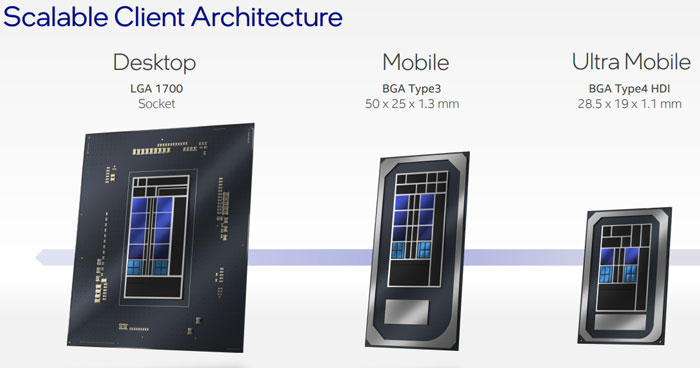 In its latest Architecture Day slide deck, Intel showed that Alder Lake desktop CPUs are going to have integrated Xe graphics components, as part of the SoC, featuring a maximum of 32 EUs. For the mobile and ultra-mobile Alder Lake chips, there will be a much more generous maximum of 96 EUs available for graphics acceleration. This basically suggests that desktop PCs will be using iGPUs for day to day tasks, but will opt to install a dGPU for demanding workloads, while laptop users might have to rely on iGPUs more – which seems about right.

Earlier today, Twitter hardware hound Komachi shared what appears to be a section of a product list which is the first we have seen mention Alder Lake-S processors without operational integrated graphics. The list only features upcoming unlocked OC friendly Alder Lake-S CPUs, so we see the Intel Core i9 12900K, Core i7-12700K, and Core i5-12600K – listed alongside their iGPU-less brethren, the Intel Core i9 12900KF, Core i7-12700KF, and Core i5-12600KF. 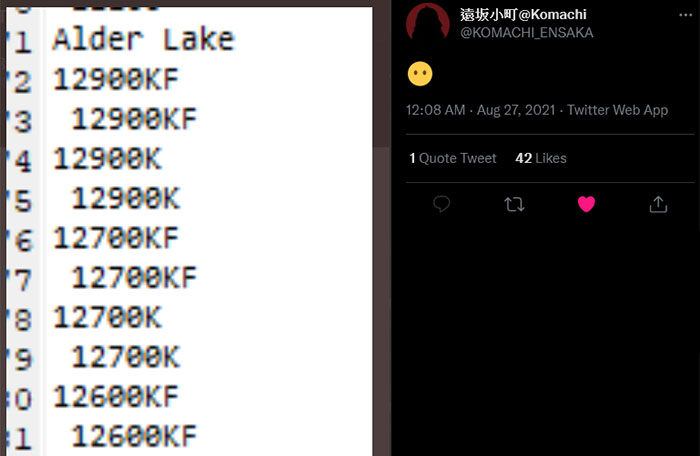 If you have been following Alder Lake news and leaks you might be aware of reports/rumours that the first Alder Lake processors launched will be the Intel Core i9 12900K, Core i7-12700K, and Core i5-12600K - alongside suitable enthusiast-level motherboards.

If they are anything like previous gen 'KF' parts, the new Alder Lake KF series will feature heavily in the HWBot overclocking world records tables later this year.

Posted by Xlucine - Sun 29 Aug 2021 22:58
Are the efficiency cores really using 1/4 the silicon area of the big cores? That's impressive - you're trading a full 7700K for a single modern core. That explains why intel's pushing them on desktop, and makes me want to see a 2B32S design (it'd fly through cinebench!)