At the end of March this year, Arm announced its first new architecture in over a decade – the Armv9 instruction set architecture (ISA). Armv9 was claimed to provide significant advances in security, performance, and AI – and now we are starting to see the first products that Arm will provide to customers based upon these new technologies. In summary, Arm has taken the wraps off the new Arm Cortex-X2 cores to target laptops, the Cortex-A710 performance cores, and the Cortex-A510 efficiency cores. In other closely related Arm chip news, the firm introduced a trio of new Mali GPUs aiming at high, mid, and entry-level devices.

Arm's new Cortex-X2 is the successor to Cortex-X1 from this time last year. These Cortex-X chips are based on a different design philosophy to the Cortex-A cores which are area and efficiency first design. Conversely Cortex-X are performance-first and designed for peak performance in short bursts in bigger devices with beefier power delivery and better thermal designs. It thus targets devices like laptops. 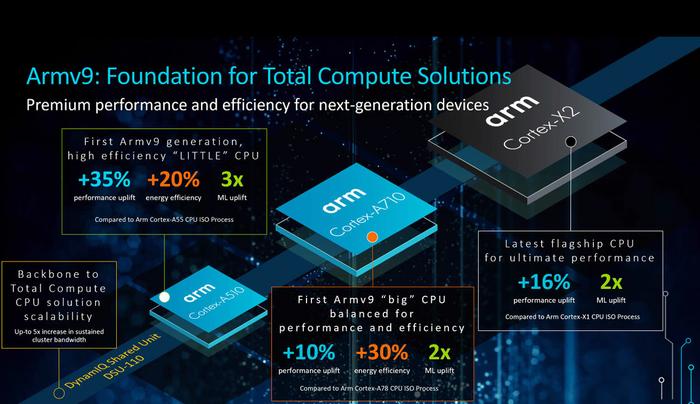 According to Arm, the Cortex-X2 is 16 per cent faster than its predecessor in general with ML performance enjoying a 2X uplift. In another comparison, Arm says it offers "30 per cent performance improvements over today’s flagship Android smartphones".

Moving along, the new Arm Cortex-A710 performance core replaces the Cortex-A78 – delivering a 10 per cent uplift in performance, as well as 30 per cent energy efficiency gain. Thanks to this new 'big' CPU core, users will "have enhanced experiences while running demanding applications on smartphones for longer than they’ve done before," says Arm. 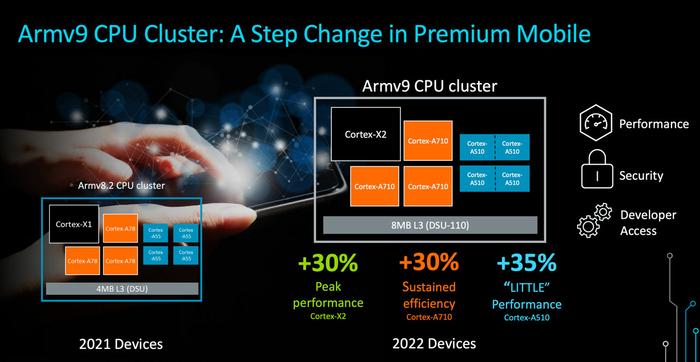 Arm's newest 'LITTLE' core is the Cortex-A510, which marks the first update to this line in four years. Users will benefit from a 35 per cent performance improvement and over 3x uplift in ML performance using this new core. Moreover, Arm says that it compares closely to previous generation 'big' cores of only a few years ago. It will likely be used in lots of smaller, energy efficacy focussed devices like smartphone, home and wearable devices.

Joining up these cores with other SoC components is the new DynamIQ Shared Unit, DSU-110, which supports up to 8 Cortex-X2 CPUs, security and ML features, while ensuring efficiency. 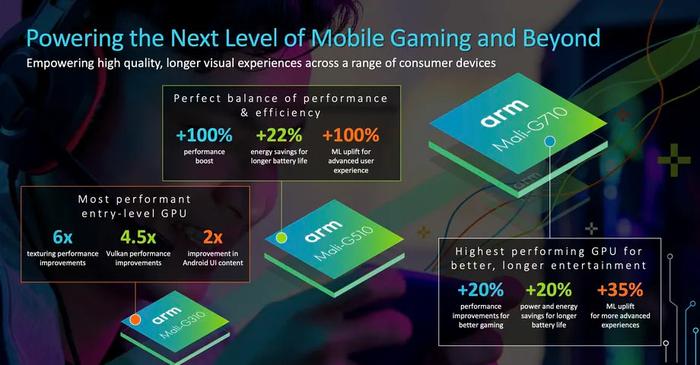 Arm Mali GPUs have just been updated too. The new top tier GPU is the Arm Mali-G710, which is said to offer 20 per cent performance improvements in general, and accelerate ML tasks by 35 per cent. The Arm Mali-G510 is the mid-range solution with bigger benefits cross-generation – "100 per cent performance improvements, 22 per cent energy savings for longer battery life and 100 per cent ML" uplifts are claimed by Arm for this GPU. Propping up the range is the Mali-G310, delivering the Valhall architecture and high-quality graphics technologies to lower cost devices such as entry-level smartphones, AR devices and wearables.

Expect to see the first devices with SoCs packing the above CPU and GPU tech starting from early next year.

Irien
Ah, the Arm A710 not to be confused with the Arm 710 that powered my RiscPC 25 years ago. Looks like Nvidia's product naming/numbering team is already hard at work at ARM, and the deal hasn't even been done yet!

CAT-THE-FIFTH
They have also copied Canon too,ie,A series is range of digital compacts which started 20 years ago. So you have Canon Powershots called the A710,A510,A80,A60,etc.

Think I had an A70. Seldom used it, but then it developed a fault years after the warranty ran.
Seemed it was intrinsic to the CCD (think it was made by Sony). And Canon offered a repair service for all the effected units even when the warranty had run out years before. Great service, unlike those Nvidia chancers with their millions of solder defect parts.

As for Acorn RISC Machines (or whatever ARM stands for these days), good to see that they little of big.LITTLE is finally getting an updated but it's embarrassing that the new little are still nearly three times slower than Apple's efficient (i.e. small) cores in the M1.
Unsure about the transistor budget, but while ARM's gains are good any Windows ARM laptop - even if it were based solely on the high end ‘big’ Cortex X2 cores - is still going to lag behind even the iPad Pro.