AMD has yet to officially announce its Ryzen 5000G desktop APUs, but we are starting to see more signs of them in leaks and spills. Last Thursday we reported upon HP Mexico listing three processors from this family, as build-to-order options for a Pavilion gaming desktop. This weekend developer Patrick Schur shared (via VideoCardz) some benchmarks from an engineering sample he has managed to obtain.

On Sunday Schur posted a screen grab of his AMD ES processor test scores in CPU-Z. You will note that the screen suggests that the processor is an AMD Engineering Sample: 100-000000263-30_Y. Schur reckoned it was an ES version of the AMD Ryzen 7 5700G desktop APU. 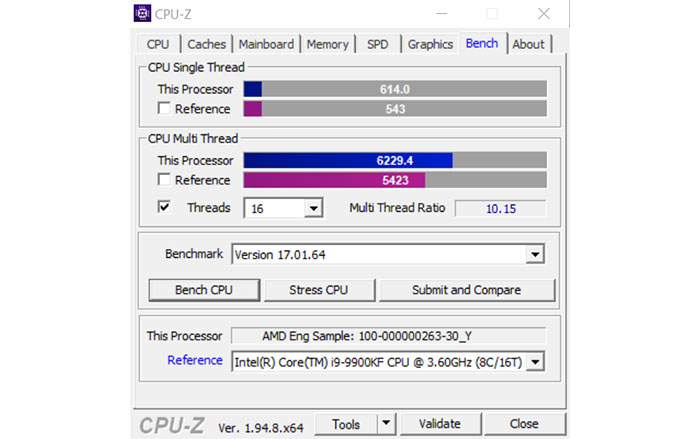 Above you can see that the AMD ES chip with 8C/16T scored 614 in 1T tests and 6229 in nT tests in CPU-Z. This was pitted against an Intel Core i9-9900KF CPU in Schur's test and showed it a clean set of heels. Against its predecessor, "the Ryzen 7 4700G, the 5700G appears to be 13 per cent faster in single-threaded tests and 8 per cent faster in multi-threaded," noted VideoCardz. The same source reckons it won't be too difficult to tune the new Ryzen to achieve "650 points in single-thread and 7000 points in multithreaded" tests. Schur actually had tweaked his sample a little, with the voltage curve optimizer set to -10, Precision Boost Overdrive configured to +100MHz, and XMP 2000MHz memory profile.

Schur has provided a small update to his post in the meantime. After discovering the ES processor features TSME (Transparent Secure Memory Encryption) the dev seems pretty sure that his sample would be marketed as an AMD Ryzen 7 5750G Pro in its final state. It is easy to make this mistake as the only difference between the AMD Ryzen 7 4700G and 4750G Pro, for example, is the inclusion of the AMD Pro technologies in the latter – core counts, caches, and clocks are the same in this case.

One of the biggest questions with these desktop APUs is whether we will see them officially hit PC DIY retailers or if they will be 'OEM only'.

Posted by DanceswithUnix - Tue 06 Apr 2021 13:22
These things should be available to retail. I would have bought the 4750G for work use if I could, but could only get one in that low end Ebuyer machine.
Posted by zugged2 - Tue 06 Apr 2021 14:23
Better than the previous best Ryzen 3400G, but unless if goes on sale it is irrelevant.
Posted by bae85 - Tue 06 Apr 2021 15:51
All I can think of when I see things like this is that meme from that scene in The Simpsons featuring AMD killing Intel - stop! stop! he's already dead!
Posted by Iota - Tue 06 Apr 2021 19:25
Why compare to the 9900KF? CPU-Z has more recent Intel offerings in there to compare to, especially considering the generational gap between them. I'd honestly have thought comparing to a 3700X would have been far better (also 8c/16t) and would give a much better indicator of the performance available from this.
Posted by darcotech - Wed 07 Apr 2021 10:19

Iota
Why compare to the 9900KF? CPU-Z has more recent Intel offerings in there to compare to, especially considering the generational gap between them. I'd honestly have thought comparing to a 3700X would have been far better (also 8c/16t) and would give a much better indicator of the performance available from this.

So I would say not bad for an APU. The most important thing will be its availability and supported chipsets.